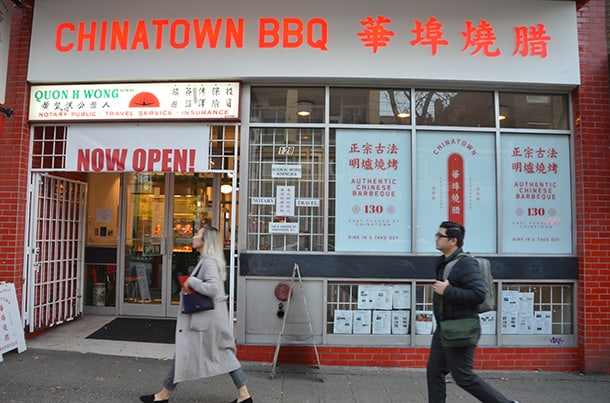 VANCOUVER, British Columbia—The menu at Chinatown BBQ is affordable — there’s free tea and a bowl of soup that can serve three or four people costs $2.50. At first, the restaurant looks like it’s been in Vancouver’s Chinatown for years, but little clues give it away. The glowing red letters of the sign and deep polished red brick facade set it apart slightly from other businesses on the street. Inside, the black and white checkered floor, padded vintage red chairs and black and white photos of Chinatown on the walls evoke nostalgia. Stylish wallpaper and antique furniture in the bathroom set it apart from other cheap restaurants in Chinatown. In fact, Chinatown BBQ was designed by a nationally-famous Canadian restaurant designer.

Chinatown BBQ is one branch of a sophisticated effort by Carol Lee, who started the Vancouver Chinatown Foundation in 2009 to revitalize the neighborhood. “Unless we had a comprehensive approach, there was going to be no solution. It was just going to basically be gone.”

The restaurant is intended to be accessible, and recognizable as a distinctly Chinatown (not just Chinese) restaurant. The staff speak Cantonese, and the cooks used to work at a nearby barbecue restaurant before it burned down. Lee hopes it will get people to come back to the neighborhood. “I wanted the old-timers — I wanted the people who felt displaced,” she says.

Chinatown BBQ is one of several revitalization projects from the Foundation, which is one group of many that has turned toward how to preserve and revive Chinatown in a way that fights displacement and honors the neighborhood’s heritage.

In some ways, the neighborhood is at a turning point, says Doris Chow, co-founder of the Youth Collaborative for Chinatown, a group that has been bringing young people and seniors together at Mahjong social events since 2015. “We’re in a place that we have not been in a very, very long time, which is to be able to envision what we actually want to see in the neighborhood,” says Chow.

Lee, who has deep connections to the neighborhood, has been working to revive it before the condo fight. The therapeutic skincare business she started is located across the street from Chinatown BBQ, in a building her family has owned since 1921. Her grandfather was one of the pioneers of Chinatown, and her father an influential Vancouver real estate mogul and philanthropist. Lee went to kindergarten in the neighborhood.

The Foundation has already made a big impact in the neighborhood, and has ambitious plans.

In March 2017, the Foundation bought the May Wah building, a historic historic single-room occupancy (SRO) hotel, preventing over 100 low-income tenants from being displaced. The Foundation is developing a building with housing and health services in Vancouver’s poor drug-ridden downtown eastside neighborhood adjacent to Chinatown. In summer 2019, it plans to open the Vancouver Chinatown Storytelling Center, which will tell the stories of Canada’s history of immigration and use it as a lens to talk about issues like inclusion, immigration and a multicultural society.

Lee has ventured into the restaurant business, with plans to re-open Chinatown’s oldest restaurant. While Chinatown BBQ focuses on, well, barbecue, the next restaurant will serve noodles and dim sum.

While Chinese suburbs like Richmond are commercially vibrant, and there’s less need for some people to come to Chinatown, the neighborhood still has a unique essence, Lee says. “It’s the buildings, it’s the people, it’s the businesses, it’s the history,” Lee says. “You want to make sure it keeps renewing, but it doesn’t lose the essence of what makes it special.”

Lee hopes her work is something others can follow. “We wanted to be the catalyst for change, to sort of help lay a foundation. We don’t want to be the only one.”

When it comes to culture in Chinatown, food is often overlooked, says Kevin Huang, co-founder of the Hua Foundation, which has been focused on revitalization through food. Outsiders and policy-makers may value the Lunar New Year performances, while being blind to what culture really looks like. For Huang, revitalization done in the right way means asking “How can we actually allow this community to thrive in their own way? Because when we’re only looking at the big C culture — so performances, festivals, art pieces, the facade — we’re losing the day to day ways of being for a lot of people. And that’s actually what I think we need a lot more of the small c in some ways for healthy communities.”

The Hua Foundation puts out a guide to local, seasonal Chinese vegetables, puts together workshops cooking with Chinese elders, and advocates for food access for low-income residents.

The neighborhood lost 50 percent of its green grocers, butchers, fishmongers and dry goods stores between 2009 and 2016, according to a study from the Hua Foundation. Traditional businesses often have succession problems, with young people not wanting to get involved. As older business owners age out of the business, there’s pressure to sell.

Chinatown’s strength is its social infrastructure, says Andy Yan, professor at Simon Fraser University. Yan defines this as social and cultural institutions as well as memories and history, community-building and social transactions. Many neighborhoods, including more recent Chinese communities in suburbs, have weaker social infrastructure. Chinatown “has ongoing challenges when it comes to financial capital, but when it comes to cultural and social capital, this is one of the richest neighborhoods in the city of Vancouver,” says Yan.

The Youth Collaborative for Chinatown (YCC) has been focusing on bringing together people of all generations to reclaim public spaces with cultural activities. It started in 2015 with Mahjong social events in the public space next to the Keefer site. It was an entry point for young people who were concerned about gentrification, but unsure how to get involved, says Chow, YCC co-founder. The first Mahjong social attracted 150 people, elders and youth. The group now helps facilitate lion dances, live Cantonese lessons and other activities. “We’re demonstrating what we’re trying to fight for — this cultural character of Chinatown with these residents of Chinatown,” said Chow. “Practicing our culture in a space where we are losing that character…I think is an activist act on its own.”

During the protests against the 105 Keefer project, the Mahjong gatherings became a hook to get people more engaged. “As you play you realize the value of the neighborhood, cause you’re starting to almost embody it.”

Chow has been feeling more hopeful. “Before, it was pretty bleak,” she says, but “seeing that the city is putting resources and investing into Chinatown is a step in the right direction.”

The UNESCO designation could bring tourism to the neighborhood, said Helen Ma. It would also be an opportunity for the neighborhood to get help from the provincial and federal governments for affordable housing and other needs.

The Transformation Team is listening closely to the community, says Ma. So far, they’ve heard concerns about the loss of legacy businesses, the importance of getting young people involved in community decision-making, rehabilitating heritage buildings, revitalizing organizations, and bringing more people back to Chinatown.

The team is looking at examples of revitalization in Taiping, China, which has revived traditional arts and crafts, folk songs and food, as well as Malacca, Malaysia, which revived street food.

The Team’s work marks a new approach for the city, Ma says. “We’re trying to shift the focus away from ‘Just let the market dictate’ and instead be more intentional about what we want to bring into the neighborhood.”

There’s still room for the right kind of development, Ma says. “Trying to protect living heritage and culture doesn’t mean freezing the neighborhood — nobody wants that.”

Chow finds hope in how many different people and groups are fighting for Chinatown using their unique strengths and complementing each others’ approaches. “Everyone is swimming in the same direction,” she said. “We may not agree with each other’s tactics or each other’s strategies or approaches, but all of these strategies are needed.”

This article is part of a three-part series made possible by Solutions Journalism Network. For more on gentrification in Northwest Chinatowns:

Vancouver urban planner Andy Yan on gentrification, racism in the NW, and the unique strengths of Vancouver, B.C. Chinatown