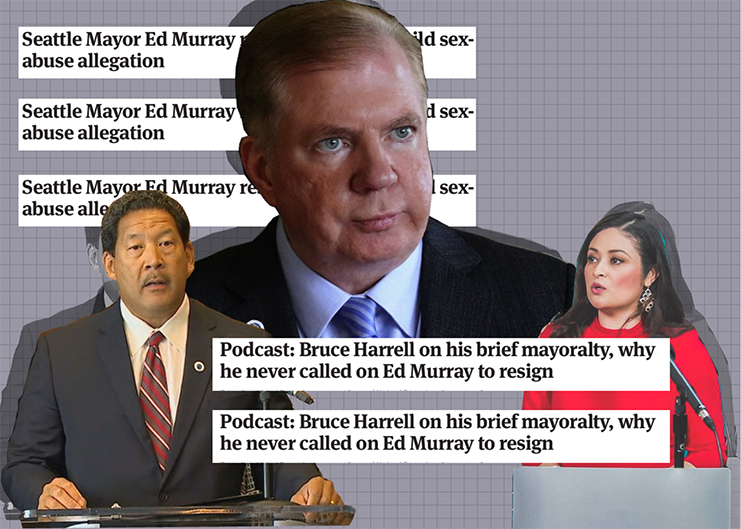 As sex abuse allegations mounted against former mayor Ed Murray in 2017, then-city councilmembers and current mayoral candidates Lorena González and Bruce Harrell had polar reactions. González, Murray’s former legal counsel, was the first councilmember to call for Murray’s resignation in a public statement issued on the morning of July 17, 2017. Harrell, Council President at the time, appeared to defend Murray following a briefing at City Hall the same day.

After that briefing, Harrell said that Seattle residents, “did not ask us to judge anyone for something that happened 33 years ago or maybe didn’t happen. We just don’t know. And I would ask that I don’t want to be judged for anything 33 years ago…. And I would challenge each of you to think about where you were 33 years ago. The question is are you doing your job today right now?”

Now, González and Harrell both have their sights set on Murray’s old seat, four years after his resignation.

Though Harrell previously asked not to be judged for anything from 33 years ago, some survivors may judge his actions from four years ago as they head to the ballot box for the Aug. primaries.

“When people in power choose to defend the accused, that has a real impact on people who are still processing their trauma,” González said in a recent phone call with the International Examiner.

She later added, “Seattle survivors are gonna have to evaluate who they believe would best serve their interests and the interests of other survivors across the city.”

Mary Dispenza, a survivor of child sex abuse and a vocal critic of Murray’s abuses, appears to have made up her mind.

“No, I don’t want [Harrell] to be the mayor,” said Dispenza, who was a board member of the local Survivors Network of those Abused by Priests (SNAP) chapter in 2017. “No, I don’t. And I know why.”

SNAP is not a political organization, but in 2017 the advocacy group called for Murray’s resignation in a letter delivered to the City Council. Months before that, the Seattle Times published an Op-Ed Dispenza wrote in response to the allegations and to disrupt the “secrecy” and “silence” she says survivors of sexual abuse are used to.

In a phone call with the International Examiner, Dispenza once considered Murray a “friend,” “a good Catholic,” and “a good mayor.” She thought he could be governor one day. However, when victims began to come forward, she said to ignore the accusations would be “a sin in itself.”

“Leaders have a responsibility when they hear the first accusation,” Dispenza said. “They can’t wait until it happens again – or again, or again.”

González was the first on the council to speak up, prompted by the release of public records detailing a 1984 investigation that determined Murray likely molested his own foster son. By this time, there were four accusers. Five would come forward before Murray stepped down Sept. 2017.

Harrell, who was appointed mayor for five days after Murray’s departure, never publicly called for his resignation. In a recent interview with the International Examiner, Harrell said his statement was misconstrued.

According to Harrell, more information came out about Murray after he made that statement following a briefing on July 17, 2017. There were four accusers at this time. One more accuser would come forward before Murray resigned.

“As an attorney, I am trained to try to discern facts first and make decisions accordingly,” Harrell said. “When the first allegation was made, when asked a question about Ed Murray, my answer was I didn’t know what had happened – I just knew there were allegations.”

González also has a background in law as a civil rights attorney. Her work included defending victims of sex abuse.

“This isn’t about prosecuting somebody,” González said. “… it’s about the fundamental moral question of whether or not you believe an individual who has been credibly accused by multiple victims of child sex abuse should have the privilege of serving as the mayor of this city.”

While Murray’s ex-foster son’s lawsuit failed because of legal barriers related to the statute of limitations, Dispenza takes issue with Harrell dismissing actions from 33 years ago.

“He’s saying, if you were abused 33 years ago, it doesn’t count – you don’t count,” Dispenza said.

Dispenza says she was sexually abused by her parish priest when she was seven years old.

“I’m 80 now, and I’m still challenged by some of the implications of that abuse around intimacy and power,” Dispenza said. “A survivor carries with him or her a lifetime of challenges.”

She characterized Harrell’s statement as a “slap in the face” to survivors.

In an email statement, Harrell said, “I was deeply distraught by the allegations, and urged Murray to resign once more was known. I am glad this chapter is well behind us.”

According to a podcast with the Seattle Times, Harrell never publicly called for resignation.

Current mayoral candidate Jessyn Farrell also initially defended Ed Murray during her 2017 bid for mayor, saying “[her] heart goes out to Mayor Murray. As a city, we must reject the politics of personal destruction.” She later called for Murray to resign in July and apologized for her previous remarks.

“It was really important to me to model what change can look like,” Farrell said of her actions in 2017. “A lot of people are still having to change if we are going to get to a place where we are really preventing sexual assault.”

Farrell laid out strategies for how she would combat rape culture as mayor: supporting consent education, funding public health access, ensuring trauma informed investigations for assaults, improving women’s economic agency, and addressing sexist workplace culture – which she has spoken out on before.

Despite their distinct reactions, Harrell and González both seem to have similar priorities in supporting survivors as Mayor of Seattle.

According to data collected by the City of Seattle and King County, domestic violence related deaths are up in 2020 compared to 2019. González says she wants to “invest significantly” in programs that will address domestic and sexual violence that survivors “cannot escape now” due to the pandemic.

In an April 15 press release, Harrell called for city leaders to allocate a minimum $10 million in federal relief funds to address the rise in domestic abuse and gun violence.