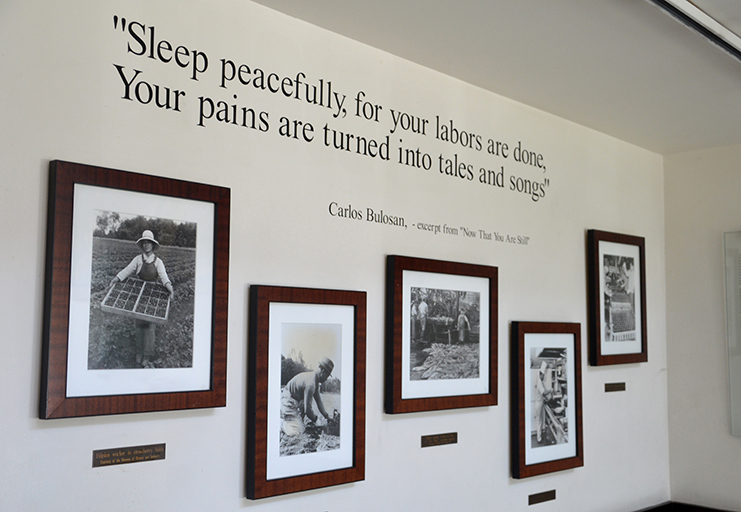 Rey Pascua has spent nine years asking legislators to permanently designate October as Filipino American history month in Washington. Based in eastern Washington, where he serves as president of the Filipino American Community of the Yakima Valley, Pascua travelled across the Cascades to Olympia six times in 2019 alone.

Now, thanks to Senate Bill 5865, approved by the House of Representatives in a 98-0 vote and delivered to Gov. Jay Inslee at the end of April, Washington will commemorate Filipino American history every October.

“It gives us, we Filipino Americans, I believe, a source of pride we can bring to our diverse communities here in Washington state,” said Pascua, reached by phone at his home in Sunnyside, Washington.

Washington is scattered with cities and towns rich in Filipino American history. Famed writer and poet Carlos Bulosan worked as a labor organizer in Seattle’s Chinatown, and documented racism against Filipinos there in the 1930s. From pool halls in Seattle to farms in Yakima, Filipino Americans organized labor movements and won battles for their rights and dignity. From Fort Lewis in Pierce County, from which Filipino Americans deployed to fight in every major U.S. war, to working in the Bremerton shipyard, they made their mark on military history. And according to Filipino American historian Peter Jamero, Filipinos in Washington and around the country were “in the vanguard” of protest movements and resistance led by people of color.

Pascua hopes the new state bill will improve education about Filipino American history in public schools. “It sets the correct mode for a younger generation to do this all right and study their history,” he said.

On the national level, October has been Filipino American history month for over 25 years, but the state recognition is key for education, said Devin Cabanilla, public historian and former board secretary for the Filipino American National Historical Society’s (FANHS) Seattle chapter. “It gives us a platform to work on to provide specific history about FIlipinos,” Cabanilla said.

“There are state-specific people and events that we can put into school curriculum.”

“A lot of Filipinos are greeted by folks with ‘Go back where you came from,’ that kind of language,” said Jamero, founding national vice-president of FANHS and author of Vanishing Filipino Americans: The Bridge Generation. “It’s a shame that not more is known about the fact that Filipinos have been in this country even before there was a United States of America.”

On October 18, 1587, a Spanish ship landed close to Morro Bay in California looking for food and fresh water. Two Filipinos among the crew were sent ahead as scouts. After a few days, the landing party clashed with local Native American residents, and a Filipino and a Spaniard were killed. The first permanent Filipino settlements in the U.S. date back to 1763 in Louisiana, started by Filipino who fled from the cruel conditions on board Spanish ships.

“Filipinos have been here longer, settling here longer than many other Asian groups, but we’re pretty much overlooked by everybody,” said Cordova.

Cordova’s parents came to the United States as U.S. citizens, when the Philippines was still an American colony – another aspect of history she said most Americans don’t know. “I’m 87 and people still ask me how long I’ve been here–I was born here,” she said.

For Cordova, it’s important that the month is more than just a heritage month to celebrate food and folk dances. “We will include folk dancing as part of it, but that isn’t the reason for it,” she said. “We’re not here to entertain you. We’re here to show you that we’ve been here a long time, and we’ve done something worthwhile here. And that we suffered like other minorities, but we’ve endured, and we’re proud Americans.”

While Cabanilla admires the efforts of Pascua and others to independently push for the Washington bill, he wonders what will happen now that the advocacy is over. “Since it’s permanent now, I hope it doesn’t get swept under the rug or forgotten if there’s no longer a regular push,” he said. Cabanilla also hopes non-Filipinos will be receptive to the designation. “Sometimes when something inclusive occurs, there is a potential for more pushback in the current political climate,” he said.

Pascua was inspired to advocate for the bill in 2009 after seeing California and Hawaiʻi – states with significant Filipino American populations – pass similar bills in 2006 and 2008.

At first, Washington lawmakers weren’t interested in making the month permanent, Pascua said, agreeing only to annual resolutions, or proclamations from governors. So, from 2010 onward each year, Pascua would travel to Olympia to ask for another temporary resolution.
“It was almost a one-man effort in the state of Washington,” said Cordova.

Pascua was starting to get tired of it when, encouraged by Sen. Bob Hasegawa (D-11), he asked his state senator to sponsor a permanent bill instead of a temporary resolution. A House version of the bill died in March, but the Senate bill, co-sponsored by 11 Senators from both parties, passed April 17, one of only five bills passed before the cutoff date.

Around 100 other bills fizzled before a vote could be held, and Pascua is grateful to Speaker of the House Frank Chopp for making sure the bill got a vote.

Over the years, between petitioning legislators in Olympia, Pascua also persuaded around local 20 school districts, cities and counties in Washington, from Everett to Spokane to Kitsap County, to pass legislation establishing a permanent Filipino American history month.

Pio DeCano II, whose father Pio DeCano Sr. successfully challenged a state law banning Filipinos from owning land, joined Pascua on many of these trips. He would sometimes get calls from Pascua on short notice: “Can you meet over at Bainbridge Island, cause I’ve got a meeting with the school to push for Filipino American history month.”

On April 18, the day after the bill passed, Pascua celebrated with community members at the Filipino Community Hall in downtown Wapato, in the Yakama Indian Reservation. The hall, built in 1952, was the first Filipino Hall built in the West, according to the Yakima Herald. It was built after the Filipino American community faced decades of violent threats from mobs, and an Alien Land Act forbidding Filipinos from owning land. The Filipino community was able to buy land on the Yakama reservation in 1942 only after Yakama Nation Chief Jobe Charley convinced federal authorities in Washington, D.C. to allow Filipinos to buy it.

“He’s very imbued with the Filipino American history of eastern Washington, which has a really different flavor to it in some respects, because there was a lot of interaction between Native Americans and FIlipinos” said DeCano of Pascua.

During his nine-year quest, Pascua got the state to pass proclamations and resolutions acknowledging Filipino Americans from Washington state who have contributed to U.S. history. The list, “just the tip of the iceberg,” according to Pascua, includes Carlos Bulosan; Fred and Dorothy Cordova; Dolores Sibonga, the first Filipino American woman to serve on Seattle’s City Council; Velma Veloria, the first Filipino American elected to the state legislature; Bernie Reyes Whitebear, a Native American activist of mixed Filipino ancestry, who exemplified the interrelated histories of Native Americans and Filipinos; and “Uncle” Bob Santos, the legendary Chinatown-International District activist and former regional HUD administrator.

After a few years, Pascua himself was added to the list, to his surprise. He is one of only a handful of members still alive.

Pascua wants to publish a book printing every local proclamation and resolution he helped pass, above the beautiful stationary and gold seals of county and city governments. At the top, he said, will be the fruits of almost a decade of his efforts: The state bill signed by Gov. Inslee.