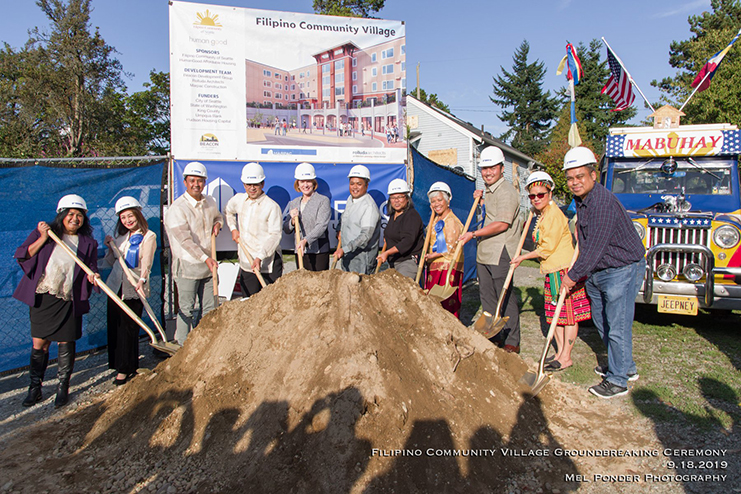 On a surprisingly sunny September afternoon, 400 community members gathered together to mark the official start of a project long in the making. The guest list was impressive: Mayor Jenny Durkan, State Senator David Frockt, Former State House Speaker Frank Chopp, King County Councilmember Larry Gossett, and a slew of other local elected officials, curious community members, and impassioned supporters. Attendees munched on copious amounts of lechon, chicken skewers and empanadas, and were treated to performances by Kalahi Philippine Dance Company and FYA Drill Team. Drag queens and Pride ASIA co-founders Aleksa Manila and Arnaldo Inocentes acted as the groundbreaking ceremony’s emcees. It was a celebration of community, history, and the beginning of a new era for the Filipino Community of Seattle and its upcoming Filipino Community Village.

The blue-and-yellow Filipino Community Center tucked in the Rainier Valley has been serving the city since 1965. Filipino cannery workers from Alaska originally bought the run-down Empire Lanes Bowling Alley as a space for Filipino Americans to safely socialize among their community. The center retained its bowling alley roots until the late 1980s’ when the building was renovated to make way for offices, classrooms, a ballroom, and a library. In 1992, the center became a nonprofit organization and ramped up its community programs including serving seniors citizens lunch, providing domestic violence education, and offering Tagalog, dance, and citizenship application classes.

Come early 2021, the center’s presence will grow even larger as it opens the Filipino Community Village just behind its current headquarters. Three single-family houses will give way to a $32 million five-story development with 95 affordable housing units. The units will be reserved for senior citizens 55 or older making at least 50 percent below the average median household income. According to data released by the U.S. Census Bureau, the average median household income in Seattle in 2018 was $93,500 meaning residents applying for housing in the village will need to make less than roughly $46,000 per year.

Plans to develop the village began 10 years ago when the Filipino Community of Seattle’s Board of Directors came together to discuss their community’s most pressing concerns. Noticing the influx of senior citizens participating in the community center’s various programs, the board decided to construct a building specifically tailored for the elderly population. They teamed up with Beacon Developments and Rolluda Architects and began working on what would eventually become the Filipino Community Village.

“This is all for our seniors,” says Agnes Navarro, executive director of the Filipino Community of Seattle. “Not all of them have family here and we need to take care of them.”

The village is not exclusively for seniors, however. The village’s first floor will house a 4,900-square foot Innovation Learning Center intended to draw in a younger crowd. The dedicated space, which was funded entirely by the nearby community, will offer computer classes to children and adults alike. Youths will have access to a lounge, a robotics program, and a science-technology-engineering-arts-math (STEAM) program. Residents and visitors will also be able to explore a balcony-level p-patch and multi-purpose room.

“It’s a multi-generational project,” says Velma Veloria, co-chair of the Filipino Community Village Advisory Board. “We are bringing together people of all ages and providing them with a space to better their skills.”

Seattle-based architectural firm Rolluda Architects was hired by the Filipino Community of Seattle to design the project. For lead architect, Alex Rolluda, the project is personal: His father was one of the original cannery workers to donate his paycheck towards purchasing the community center.

In designing the village, Rolluda thought it important to incorporate different aspects of Filipino architecture. The building’s central plaza not only provides direct access to the existing community center but is also designed to resemble the Filipino flag with a sun and eight rays representing the eight Filipino provinces that rose up to defeat the Spanish after 500 years of colonization. Artwork both inside and outside the village will further reflect Filipino culture and history.

To make this South Seattle village a reality, it took a community of helping hands. “This project has been on our minds for the last decade,” says Veloria. “I’m looking forward to the day where I can feel relief knowing that our job is complete. It really does take a village.”