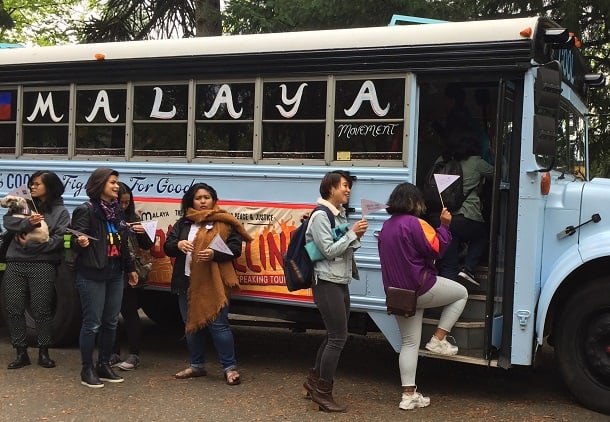 Approximately 50 people cheered the kickoff of The People’s Caravan on May 1 to highlight human rights abuses under the regime of Philippine President Duterte.

The caravan, which was heading to Portland, plans to stop in other major cities on the West Coast. The goal of the caravan is to spread solidarity, to stop killings, to end U.S. military support and to prevent tyranny in the Philippines.

Rally participants said an estimated 20,000 poor Filipinos and religious leaders have become victims in Duterte’s attacks on his people.

One of the coordinators for the coalition in the Pacific Northwest, Rhondalei Gabuat, explained that their goal is to tell Americans where their tax money is going, how militarization is affecting the Philippines and what the relationship is between President Trump and Duterte.

“This is to educate folks and to bring in witnesses to what’s happening in real life,” said Gabuat. With the People’s Caravan, Gabuat hopes to spread awareness about day-to-day life in the Philippines, as well as about oppression that she says is caused by the U.S. government.

Gabuat said a recent example of repression involved a 25-year-old activist from Mindanao, an island in the southeastern Philippines. Jerome Succor Aba was denied entry to the United States on April 18 and sent back to the Philippines.

Gabuat said that Aba had been denied access to the United States because of his activism in the Philippines. Aba was supposed to be in Seattle on May 1 to share his perspective about being Filipino.

“I am getting on the bus, not only as a supporter of this movement, but as a sign of solidarity to build with the folks that are coming from the Philippines,” said Gabuat. She explained that traveling is a great opportunity to connect with people and to broaden participation in their movement.

According to Gabuat, the long-term goal is to grow the movement and prove that anyone can get involved. As grassroots activists with no funding from big organizations, they support themselves.

“We believe in the work that we do, and we know that the systems are not going to change for the better” by themselves, Gabuat said.

One war is on the indigenous people of Mindanao, Denina said. “It’s primarily Muslims.” Duterte has declared martial law in Mindanao, which has caused thousands of people to be displaced.

The second conflict is the war on the poor, otherwise known as the war on drugs. Dennis said that anyone accused of using drugs, which are primarily impoverished people, would be immediately killed.

The final war is against the community organizers and movements that are fighting for change in society.

The driver of the People’s Caravan bus, Joe Keating, was simply an activist with a bus when he heard about the human rights situation in the Philippines.

“It’s an honor to be able to help a community that has a dire need to stop the killing that’s going on in the Philippines,” Keating said.

Keating’s bus, titled “Cool,” received a fresh paint job before departing on the caravan. The recently adapted logo, “It’s cool…fighting for good,” appeared on the side of the bus as it pulled away from the rally in Seattle on May Day.