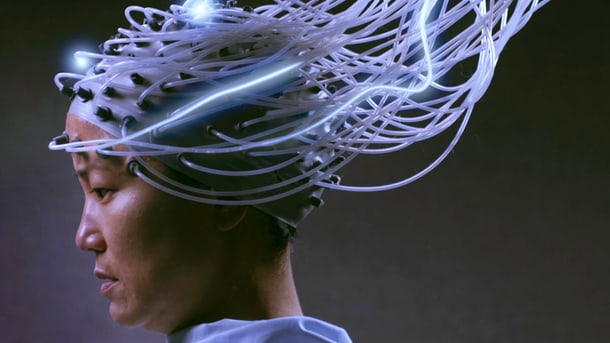 There is always something so powerful about the love that a parent has for a child. In the uncertain times of its believable future setting, this love carries the plot of Advantageous.

I can’t quite place what touched me the most about this film. I know for certain that it may not satisfy some like it did for me, and frankly I’m quite surprised at how engrossed I was with it. Despite some of the criticisms I’ve seen, I don’t think the film was lacking in its story. The pacing may be slow and the lack of detail in this future dystopia may be muddled and largely left unexplained, but what pulled through from the film were the different displays of humanity from its characters.

The start of Advantageous was particularly slow and I had thought that the film wouldn’t be surprising in the least—the mother would go through with a cosmetic procedure, her daughter would struggle with the transition, then all would be well. My prediction wasn’t wrong but it wasn’t that simple either.

Director Jennifer Phang co-wrote the film with its lead actress, Jacqueline Kim, who gave a compelling performance as a single mother desperate to provide for her daughter. Played by Jacqueline, Gwen Koh is the face and spokesperson of Center for Advanced Health and Living, a powerful corporation that is left largely unexplained. She is fired as they begin the search for someone who can appeal to a younger demographic.

The film follows her as she struggles to find a job and give her brilliant young daughter, Jules (newcomer Samantha Kim), a chance to shine. The only glimpse of youthfulness in the film is a wideshot of Jules leaping and bounding down a sidewalk with two friends. It is a moment the film keeps coming back to, a reminder of what is at stake. She is sharp as a knife, a highly intelligent girl who questions why she is alive. As the film continues, we see just how bright Jules is, with a mind as complex as a maze.

To hear a child question her existence—to see the world as it is, full of greed and chaos, and to try to comprehend the point of her life—was a pivotal moment for me. This was a core element of the film, the question of what made life worth living.

Gwen does whatever she can to look for a job or other options but her search is fruitless. Inevitably her instincts lead to proposing an idea to her former boss (and, as hinted, possibly her ex), Dave Fisher (James Urbaniak), telling him that she could go under the knife and become proof of their new cosmetic product, a body swapping procedure. She has a concerned friend in Fisher, who tries to look out for her best interests. But this isn’t her final option—not yet, anyway.

The details of the setting were slowly revealed throughout the film, hints here and there of the uncertain climate that they lived in. Eventually the audience could piece together how the setting factored into Gwen’s outlook. She had to find a way to get money or else they would end up just like the women and girls on the street and in the news.

In the film, women are disproportionately affected by low conception rates, sickness, unemployment, and homelessness. On top of that, there seems to be almost day-to-day explosions in the city that signify the unrest in their society. The way these details were scattered throughout the film made the setting secondary, almost muted. The lack of specificity may be irritating to some but the film provides just enough context to explain the reality of their daily lives. If things had been explained any further, it would have taken away from what was most important: this was Gwen’s story, and it would have been an injustice to dampen it with distractions.

Advantageous shows what different individuals do when life hands something to them. This film displayed examples of human nature and the different capacities it may have. The narrative embraces mistakes, difficult decisions, and acceptance, coming from a place of understanding to show us the complexities of what we choose to do in the life we are given.