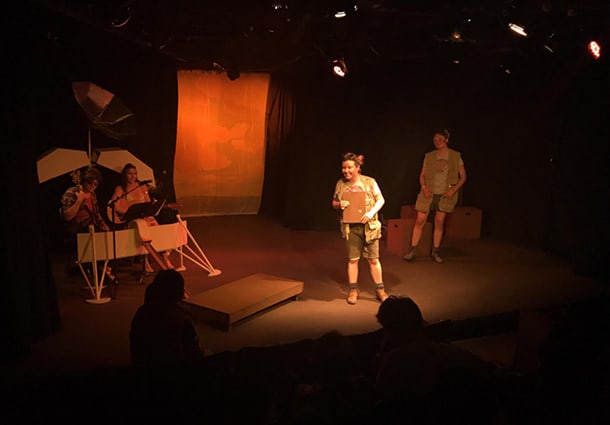 Ever wanted to visit the planet Mars?  Well, now you have your chance, with Annex Theatre’s current presentation of Rovers!

This piece of musical theatre by Natalie Copeland and Aaron Shay is billed as an interactive orientation to the red planet near us, and the characters are counselors and geologists ready to make your journey meaningful with stories and original songs.

Two of these guides are ALISCE, played by actor Minna Lee, and Curiosity, played by actor Queenelle Gazmen.  “When I pick out shows to audition for I usually try to go for projects that will challenge me or require a lot of risk,” said Lee.  “Singing in front of a crowd always puts a person in a pretty vulnerable state and I had not really done a lot of musical theatre in the past, so I was interested in taking that chance with Rovers!”

Gazmen agrees that this project is a welcome challenge. “Any play that pushes for a diverse cast, especially gender-wise, automatically gets added to my audition list,” she said.  “I didn’t know much about the current rovers and landers on Mars besides viral headlines so it was nice to get in touch with the hidden space-loving side of me.”

An additional challenge in this production has been to bring the characters to life.  “All the characters are based off of actual robots so the challenge is finding those personality traits that make your character relatable to the audience and to you,” Gazmen said.  “Personification was never my strong suit in English class but I’m having a lot of fun delving into Curiosity’s mechanics.”

Lee and Gazmen both find the immediacy of live theatre very compelling.  “I’ve always been fascinated with live performances and the human connection made through those experiences,” Lee said.  “There is something magical that happens in the air between the audience and the stage whether it’s a concert or a Shakespeare play.”

That two-way exchange between performer and audience can be very satisfying.  “Performing on stage is all about being in the moment,” Gazmen said.  “You rehearse and highlight and take notes and tab your script but even that doesn’t prepare you for the experience of a live audience responding to what you do.”

This experience can demand a great deal of emotional fortitude from an actor.  “Performing requires a lot of empathy and vulnerability because you need to allow the audience to enter this world that you’ve created,” Lee said.  “You leave with something and you experienced a moment of connection with another human being.”

Gazmen finds this especially important now that theatre and its audiences are undergoing generational and cultural changes.  “Especially now that audiences are becoming more diverse and the stereotypical high-class theater crowd is losing its credibility as being the only ones deserving of theater,” she said, “it inspires me to expand my skills to know how to impress a diverse audience and also how to impress myself.”

But deepening their acting skills are not the only challenges that Lee and Gazmen have faced in their theatre careers.  “Tokenism has been one of the largest obstacles in my career as a theatre performer,” Lee said.  “So many theatre companies are trying to check off that diversity bubble without actually taking the time to unlearn the racism and misogyny that they have built up inside themselves over the course of their entire lives.”

To those two barriers, Gazmen would also add economic class. “Whether it was lack of money, resources, or staff interest, I had trouble finding ways to develop my performance skills in an academic setting,” she said.  “I’m still figuring out how to navigate the casting, writing, acting, and stage manager world which all have overlapping circles.”

Lee finds that true representation of diverse stories remains lacking in the theatre.  “It’s very frustrating when theatre artists see me as an answer to their diversity problem in their project, but do not actually care about the stories and experiences that queer Asian American women like me face everyday,” she said. “There’s nothing trendy about featuring more people of color in your production. Including voices from marginalized communities is valuable and important to the art form and the future of theatre.”

Gazmen feels some hope for the future of greater diversity in theater.  “One role I’m most proud of is playing Frankie in A Redefining Gaze Production’s first webseries Instrumental Closet,” she said.  “As awkward as it is to admit, it’s a role that I empathized with the most in terms of coming out and dealing with a family that doesn’t accept you for who are. As a queer Asian, there were a lot of subtle hints in the script and that I asked to insert about the importance of family and how the stress on keeping the family together can go against being true to your personal identity.”

For now, Lee and Gazmen are joining the rest of the cast of Rovers! in creating a robot and human community in a distant location where everything is a bit alien – and is more interesting because of it.