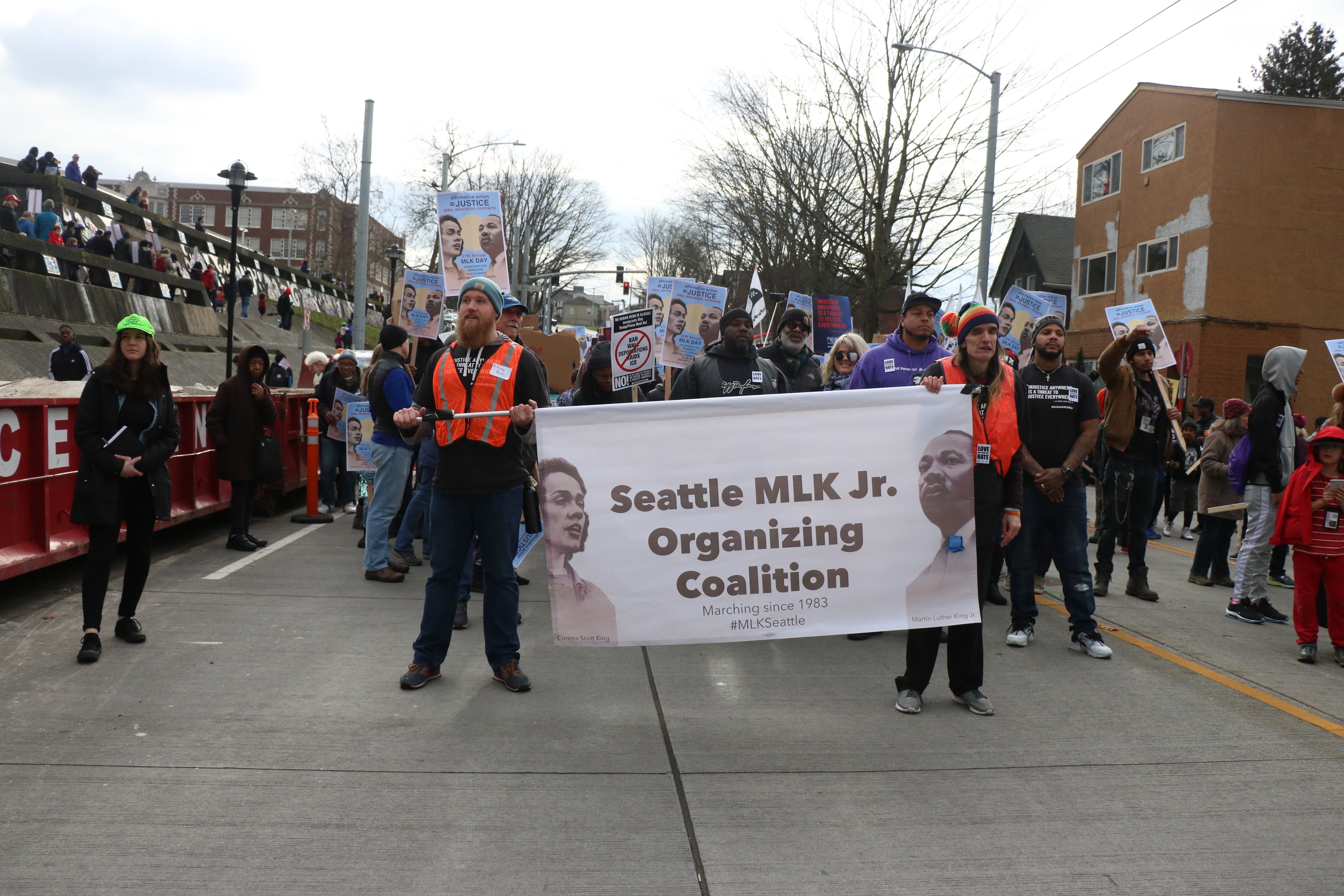 All photography is by Grace Madigan.

Their rallying cries echoed from the gym and out onto the street, kicking off a march from Garfield High School to downtown Seattle. At the start of the march, a contingent of several organizations advocating for issues affecting the Asian community in Seattle, the U.S. and the world gathered on 23rd Ave. outside of Garfield High School at the starting point of the march.

They chanted, “Hey Trump, can’t ya see? Bombs don’t bring democracy!” and “Whose streets? Our streets! Whose war? Their war!”

One such organization was Gabriela Seattle, a grassroots organization dedicated to fighting for national democracy in the Philippines and greater womxn-specific issues, ranging from reproductive rights to the “national and international economic and political issues that affect womxn,” according to their website.

Alongside them were members of South Seattle-based organization Got Green, which advocates for environmental, racial and economic justice for low-income communities and communities of color. Also present was FIGHT (Formerly Incarcerated Group Healing Together), an advocacy group formed by formerly incarcerated API men, and Anakbayan, a national organization of Filipino Youth and Students looking to advance the causes of national democracy.

“These are pieces of legislature and financial resources that go toward continued militarization in the U.S., Philippines, Venezuela, Palestine and all over the world; resources, time, and effort that could instead confront in the root causes of government shutdown and the lack of social services for the people are being used against the people for imperialist plunder,” said Anakbayan and Gabriela Seattle in a statement about the causes of their movement.

The groups present had multiple but overlapping causes. Individually, they advocate for those within their own communities but as a whole they stand up against capitalist and imperialist causes which derail a range of communities in the U.S. Many of these groups collectively protested the recently proposed policy that would allow thousands of Vietnamese refugees to be deported, the potential construction of a new youth jail, high incarceration rates that are affecting those in their communities and the rights for youth at the border. These are just a few of the many larger causes each group advocates for.

“There’s a feeling of good, and there’s a feeling that there’s a lot more work that has to be done,” said Oloth Insyxiengmay, an advocate in Seattle’s API community and a founder of the Asian Pacific Islander Cultural Awareness Group (APICAG) at Clallam Bay Corrections Center. “The community that came out isn’t all of the API community in Seattle. I think our community is often overlooked…even Asians themselves succumb to the model minority myth.”

Community members present at the march expressed similar sentiment, that there is a need for greater activism and engagement with the surrounding community, not just within the API community, but others as well.

A few members from Gabriela Seattle brought along their own children, who were pushed in strollers surrounded by the purple and white signs of the Gabriela cause. The marchers surrounding those children spoke about working together to leverage their activism, which ideally draws as many people to the streets as possible.

“Unless it comes to your front door, people don’t get it and people don’t understand,” said Insyxiengmay about how issues like deportation, incarceration and poverty all touch the community he’s from, but for many it takes a direct impact to spark activism.

Gabriela Seattle and Anakbayan are looking to mobilize new community members by organizing more workshops, events and panels, encouraging those that are impacted to tell their stories. They see solidarity in community — locally, nationally and internationally.

Alongside the groups and the chants on 23rd Avenue stood some marchers observing the sea of causes before them.

“We were a bit more involved in California where we’re originally from, so I think now we’re both just trying to find our community and engage in a way we’re familiar with,” said Kathy Nguyen who joined the march. She just moved to Seattle from California. “We’re looking for a sense of community and acts of solidarity as well as recognizing the actions we can take to fight back.”