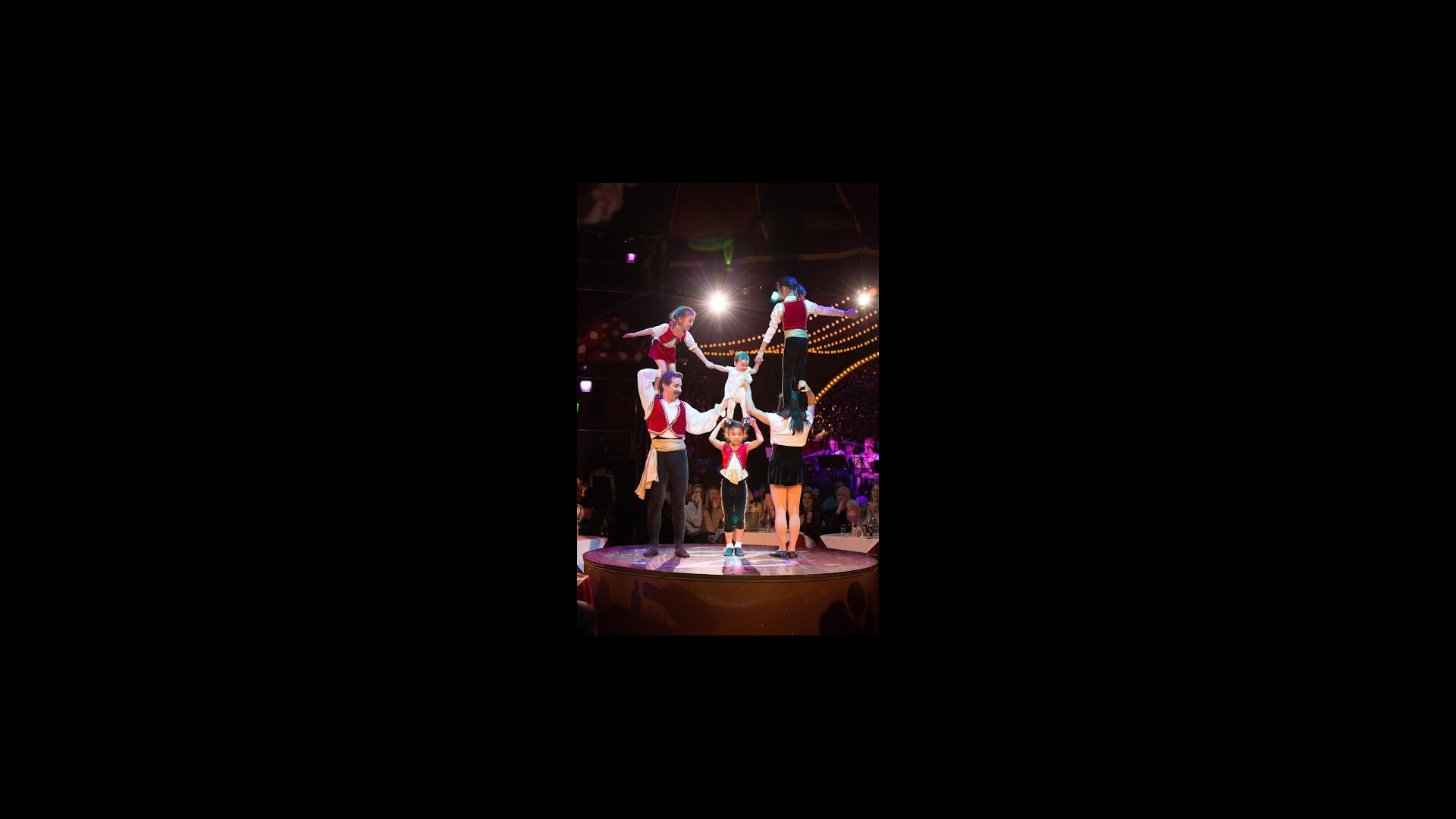 On March 16, 2017, the 14th Annual Moisture Festival opened with a high-energy foot juggling performance by Famiglia Gentile. Carlo and Orlene Gentile and their four children—Guisi (1), Gioia (5), Giulia (8), and Gianluca (10)—captivated the audience, juggling vases, a table, and each other to kick off the world’s largest live comedy/varietè festival. The International Examiner caught up with Orlene, a second-generation Filipina-American, to talk about family, the circus, and discovering what we are capable of. This interview has been edited for length and clarity.

International Examiner: How did you become interested in the circus? What was your experience getting started, and what was the path to where you are now?

Orlene Gentile: Carlo was interested in the circus in high school, and taught himself how to juggle and unicycle. … There was a small circus that came to his school and their performing troupe traveled all across the country. When he graduated high school and was applying to colleges, he also applied to the circus—that particular circus that had come to his school. He was accepted and decided to go with the circus for two years out of high school, and traveled the country with them to see what that was all about.

After that he went to college at Santa Clara University in the South Bay. That’s where we met. We both went to Santa Clara University. He was majoring in theatre first and then decided to go for an Italian major. I majored in biology. But I had a history of performing in dance. I danced since the age of three, and then continued my dance through high school. In college I was doing ballet and other dance at Santa Clara. I was in the performing arts, but I never thought of performing in the circus until I met Carlo. So that’s how I got into it, through him.

When we decided to get married, we tried to find something that we could do together. It took a while. We were exploring different disciplines. … We found a coach in China who was interested in training us and teaching us their tradition of foot juggling. So we ended up in China in 2004, and then again in 2006. The first time we were there for three months, and the second time we were there for about six months. We didn’t quite stay for the whole six months, because then I was pregnant with Gianluca, our first child, and I think I just wanted to finish. I was already four-and-a-half months pregnant and foot juggling a table and I was like, “Okay, I’m done.” [laughs] When we had kids, we knew we wanted to incorporate them in the act. From the time they were old enough and interested enough, we just would incorporate them as much as they were interested, and that’s where we are today.

IE: What is it like performing with your family?

OG: It’s something really special when we’re out there with the kids, doing it all together as a family. It kind of shifts the focus. Sometimes when I perform solo or duo, I would kind of get really nervous or start thinking about other things. But then when I perform as a family, I just feel like, “Hey we’re out there, we’re doing it.” I don’t even think about those things. I’m just out there with my family, having a good time.

IE: What do you enjoy most about juggling?

OG: I really enjoy the footwork. I felt like it was a good connection for me, having done the dancing. Foot juggling is really different from hand juggling. I never had very good hand coordination [laughs]. Growing up I always used my feet a lot, so I felt like it was really a good fit.

I really enjoy connecting with audiences. Being out there, it’s kind of like a sacred space, being in the ring or being on stage in front of people. You’re inviting them in to share a moment with you that hopefully is full of joy and a special experience. That moment in time when you are connecting with them and you’re both sharing something that is there for that moment and then it’s gone. I guess that’s the whole idea with the circus. For one day the circus is there, and then the next day it’s gone.

IE: What has been the most challenging?

OG: Probably the most challenging thing was the training. When we were in China, we trained six days a week, eight or nine hours a day. This was before we had kids. They sent us the schedule ahead of time and I thought, “Oh, this is just for the paperwork. They’re sending us this schedule but we’re not really going to train eight hours a day.” [laughs] And we got there and we did train eight hours a day. From the first day! The first three weeks I was just crying every day. I couldn’t believe you could push your body to that limit. I realized when we were there, in my own training, feeling it in my own body and looking around at everyone else, all the young students and children, it really made me believe that anything is possible. As long as you are dedicated to it, anything is possible. It was really challenging to push myself to that limit, but also exciting and gratifying. I realized that I could actually do that.

IE: What kinds of life skills do you think circus can bring to kids?

OG: I think the great thing about circus for kids is that there’s a place for everyone in the circus. No matter what your interest or skill is, there’s a community in the circus, and a cooperation versus a competition. The individual, like I was in China, is pushing themselves to their own limit. So it’s not like you’re competing with other people to do something. You’re always challenging yourself to do better. You’re not measuring yourself by anyone else. I think that’s a great thing about circus for kids.

We’ve directed circus programs, and it really is amazing the confidence that kids get from creating something, working on skills, and then being able to perform in front of an audience. Having the audience appreciate them, realizing that they shared something really special of themselves that the audience is grateful for. That’s huge for their self-confidence.

Physically, I think circus is one of the best activities for health. Training-wise, you have to dedicate yourself. You get to be passionate about something and really focus on an activity. That helps your brain, your body, and your characteristics of determination, persistence, and working towards goals. There’s so much in circus that is great for kids. Growing up in it and being able to use their bodies and use their minds and gain that confidence and that experience working on something, performing something, and sharing that with others.

IE: It’s clear you have a lot of passion. We have young APIs in our readership. Do you have any advice for some of them who maybe aren’t familiar with circus, who want to become involved?

OG: Well, I think in Seattle there are great resources. We’re actually doing an artists-in-residency at SANCA [The School of Acrobatics and New Circus Arts]. But we’ve seen programs and have been involved in circuses all around the country through an organization called the American Youth Circus Organization. We were founding members and I was on the board as president for four years. Every other year they have the [National American] Youth Circus Festival. … SANCA has been involved in AYCO and they’re going this summer.

Locally, SANCA is just a super facility. It’s really one of the best facilities in the country—the most extensive and expansive. They teach so many different disciplines. From flying trapeze, to trampoline, to German wheel, aerial, unicycling, tumbling, clowning. I mean, just so much. You can join at your interest level—take a class a week, or just drop in. They have a drop-in flying trapeze on Friday nights where you can just try it out. And there are other [organizations] like Emerald City [Trapeze Arts].

My kids were able to audition and join [SANCA’s] performing troupes while we’re here. They have performing troupes for kids who are super interested and really want to train and try out performing as a way of expressing the skills they learn. Kids as young as five years old can join a performing troupe. The troupes go through high school, and they have different groups for the different ages. It’s really a great opportunity. It’s a good resource, even more so than other parts of the other country.

OG: They do! They offer scholarships and different programs. They have a Social Circus Program that works with populations that might not have the same resources, or with kids who might have issues at home, but they’re able to come to the circus and that helps them with their home life.

And then they have another program which is really great, it’s the most developed program of this type around the country, called Every Body’s Circus. They believe anyone can do circus. There are two brothers who come in on Saturdays. One of them is blind, and he comes and does circus. It’s the idea that circus can be for anyone. Every Body’s Circus is an individual program, where they’ll work one-on-one, where they’re totally focused on the person. Whatever challenges they might have in life, they bring that into the circus, and they feel they can overcome those challenges in the circus.

IE: It seems like circus really embraces diversity, meets people where they’re at, and is very communal. That’s exciting.

OG: Yeah, it’s really exciting! I think in general circus always does that, but specifically with the programming they have here, it really does that.

Orlene and Carlo Gentile will teach a foot juggling workshop at SANCA this April and May. Dates will be confirmed soon. To enroll, visit: http://sancaseattle.org/classes/intensive-study/workshops or call 206-652-4433.