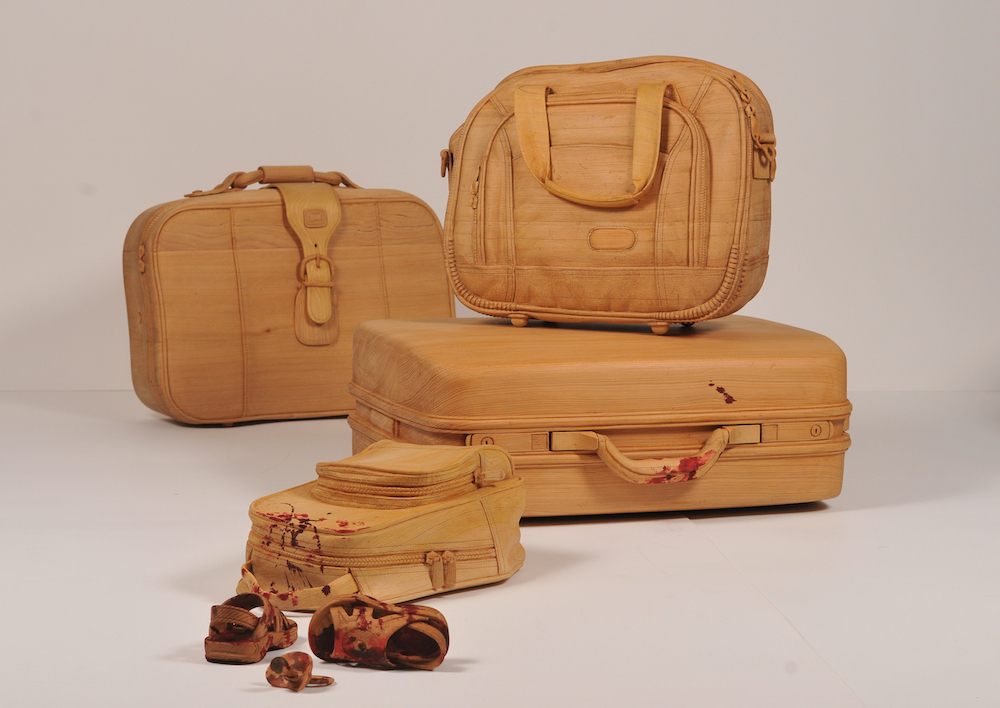 “I feel as an artist, my goal is to raise awareness through my work and discuss issues that are often overlooked. Whatever people don’t want to talk about in society is what I want to bring out through my practice.”  —Humaira Abid

The purpose of art is to communicate: to share the beauty of an object or place, to convey a feeling, to rally around a cause, to remember a person, to tell a story. Artists create because they have something to say. Humaira Abid has made it her business to speak for those who are not being heard. Growing up in Pakistan, she had to fight for the right to follow her passion: to study art in college and pursue it as a career. She had to push back against her family’s expectations and the role society defined for her as a woman. Later, as a wife, she endured three miscarriages in order to become a mother. Out of these experiences came an empathy for the struggles of all women, that she expresses in her art. The seven works in Searching for Home, her current show at the Bellevue Arts Museum, illuminate the plight of women and children who flee their own countries; the threats that drive them out; and the dangers they encounter as refugees.

Each installation is composed of life-size wood sculptures modeled on real objects: suitcases, shoes, bricks, toys. The wood is bare except for strategically placed stains. In this show, there is a lot of red, alluding to the violence that refugees suffer.

“I use a lot of symbols in my work,” Abid says. In “The World is NOT Perfect,” shoes, clothes, and cell phones stand in for the people that wore them, now scattered in a pile of bricks in the aftermath of some unnamed tragedy. In “The Stains Are Forever,” babies’ pacifiers, some stained red, represent the children killed in a mass shooting at a school in Peshawar, Pakistan in 2014. But a sweeper seems to be pushing them into the past. Then there are the lines of ants that meander across several of the installations.

“Ants are hardworking. They are always moving and migrating. They are often found with things that are dead or decaying,” Abid explains. But their presence is insidiously thought-provoking. “A lot of my work is objects you recognize… the ants make you think. Their presence starts a conversation.”

Abid’s other discipline is painting in the traditional Mughal style: delicately detailed miniature portraits that introduce real people into her installations. “Fragments of Home Left Behind” presents five of these portraits, hung askew on a bullet-pocked wall. They depict children photographed in various refugee camps. Traditional Mughal painters approach their subjects indirectly, in profile or three-quarter view; these children gaze straight at the viewer. Abid chose children close in age to her daughter.

“Some I felt were talking to me,” she says. “Their expressions speak a lot.” in “This World is Beautiful, and Dangerous Too,” Abid’s own daughter is portrayed in a garden that, on closer inspection, is full of thorny cactuses. The painting is mounted on the seat of a swing suspended above a child’s pair of bloody shoes. Abid saw a photo of the shoes, which belonged to the only girl killed in the 2014 Peshawar massacre, a six-year-old on her first day of school.

“Anything that happens in another country could happen here,” she thought at the time. “It could have been my daughter.”

All of Abid’s choices as an artist are conscious expressions of her ideas. She chose wood as a medium and sculpture as a discipline because both are more often associated with men’s work and, as a female artist, she wanted to claim them. Her work is beautiful and accessible; her virtuoso technique and the hyper-realistic level of detail in her sculptures draw viewers in. Her choice of objects and images and her use of color make them think.

Abid moved to the Pacific Northwest from Pakistan 10 years ago, after marrying a man whose career is based here. Although it was her choice to move, she has an immigrant’s empathy for her subjects. She continues to spend time and maintain studio space in both countries. She has a more elaborate workshop and uses other woodworkers’ facilities in Pakistan, where both space and labor are less expensive. But she doesn’t own a lot of tools or a stockpile of wood.

“I don’t want tools or materials to dictate what I make. I don’t want it [the wood] to tell me what I should make out of it,” she states. “I don’t have a fixed approach. I want each piece to challenge me. When I have a challenge, I go find a solution.”

‘Searching for Home’ is on view at the Bellevue Arts Museum through March 25, 2018. Humaira Abid will give an artist talk on November 4 at 2:00 p.m. at the museum. Other educational events are planned throughout the show’s run. Visit www.bellevuearts.org for more information.