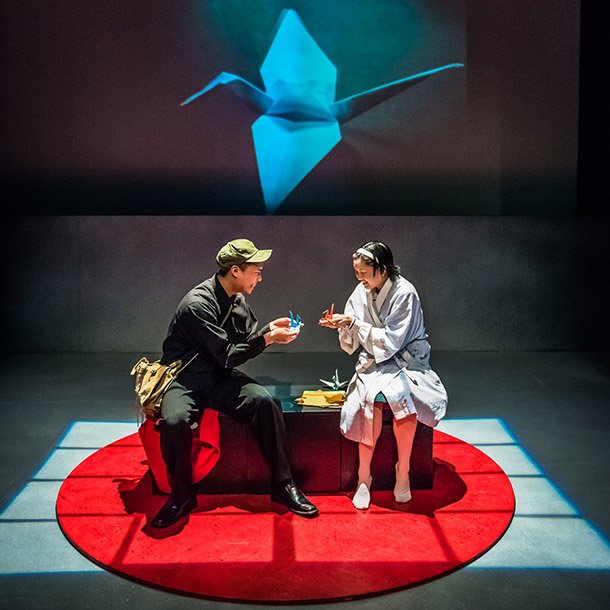 Since its inception 19 years ago, SecondStory Repertory (SSR) has offered both a mainstage season and a season of Theater for Young Audiences every year. This season, Kathryn Schultz Miller’s play, A Thousand Cranes, which tells the story of young Hiroshima resident Sadako Sasaki’s pursuit of peace following the dropping of the atomic bomb, will be featured during weekend matinees for children for four weeks.

Mark Chenovick, executive director for SSR, feels that A Thousand Cranes is especially appropriate to the winter season. “I first became aware of A Thousand Cranes while working for the Nebraska Theatre Caravan,” he said. “They had mounted a production in their previous season and everyone who worked on the show was profoundly moved.”

The show’s director, David Hsieh, also finds the show’s timing notable. ”I’m certainly familiar with the story of Sadako, having read the children’s book, and having folded many, many cranes in my lifetime,” Hsieh said. “It’s funny because I recently performed in a new play that also had many paper cranes featured in the plot and referenced Sadako’s story, so it has been my winter of paper cranes in theatre.”

The timing was also perfect for actor Tomoko Saito, who plays the roles of Grandmother Oba Chan and the Mother, and who felt compelled to audition. “This is a famous Japanese story, but I had no idea that it was adapted to a stage play, so I was very curious about the script,” Saito said. “I heard so many good things about SecondStory Repertory, and I always wanted to work with David but never had a chance before, so this production had everything I wanted in one package.”

The artistic team is focusing on staging the play to maintain the interest of all grade school age children. “Being a children’s show, this adaptation as written is fairly short, almost too short,” director Hsieh said. “One of our challenges has been finding interesting and culturally significant ways of expanding what the audiences will experience when they see this production.”

Actor Saito relates one instance of this process from rehearsal. “I thought it was funny that we all got notes from David to ‘use force’ – as in Star Wars – during the course of rehearsals,” Saito said. “I learned acting in the U.S. so my initial characterization for my roles were very modern U.S. I was having trouble shifting the gear to be a more traditional, restrained mother, and David advised to not physically show affection but ‘use the force to love.’ It was effective, too!”

Chenovick hopes that these choices will welcome a broader audience to SSR. “The original artistic director of SSR had written a number of plays and musicals based on well-known fairy tales aimed specifically at young children,” he said. “When Jen Klos and I began our tenure at SSR, we kept the program alive but shifted the focus to plays and musicals based on contemporary children’s literature. This allowed us to cultivate a larger age range in our audiences and appeal to an increasingly diverse patron base.”

He also strives to make SSR a place that kids want to return to. “SSR is a wonderful venue for children to experience theater for the first time,” he said. “We lay carpet down on the floor so the kids can be as close to the action as possible, and we maintain a relaxed and supportive atmosphere in which children can learn the basics of theater etiquette and parents can gauge their children’s attention spans for potential theatrical endeavors in their future.”

At its heart, this production of A Thousand Cranes is intended to present serious issues in a way that sparks compassion. “Although suffering is universal,” Chenovick said, “so is the hope for a better tomorrow.”