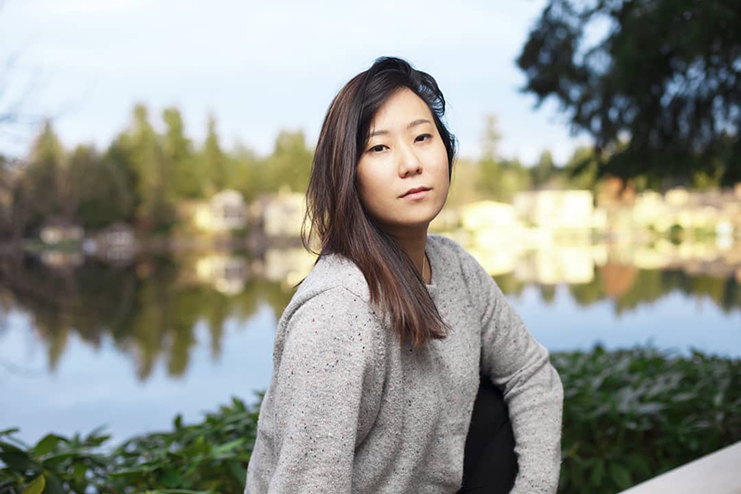 On the bottom floor of the Capitol building, Jin-Ah was teetering on top of a cushioned chair with a camera held carefully in one hand, while motioning with the other for the group to stand closer together. As one of the official photographers for the State Legislature, Jin-Ah was attempting to corral all 50+ Japanese Americans attending the annual legislative Day of Remembrance event to fit in the frame.

Jin-Ah was an artistic and expressive soul; a beautiful human, with a smile so bright it truly belonged on the other side of the camera. Their magnetic personality and vibrance for life shined through their multi-dimensional existence as a prismatic luminescence that lit up the world. Their driving force was a fiery passion for justice and goodness: they had so much in mind for what it meant to make themselves and the world better.

Jin-Ah’s decision to run for Shoreline City Council in 2017 was nothing short of a revolutionary act. Their campaign gave visibility to the Asian community living in the North King County area who have so little representation in politics. They humanized people struggling with mental health issues in the midst of an opioid crisis by using their own experience with addiction and recovery, and implored candidates for elected office to evolve their understanding, vocabulary, and platform to one that recognizes and serves human rights.

Their experience as a candidate was not met without serious challenges: they were told to Anglicize their name from “Jin-Ah” to “Gina” at the very least; that this was a compromise, as it would be even better to change their name to “Emily.” After careful contemplation, Jin-Ah gave that advisor the middle finger. And when told that their official headshot was “too Asian,” Jin-Ah doubled down in proudly representing their identity.

“Jin-Ah in Korean means ‘true self’,” they shared. It was written into their life’s very purpose to step into their identity as authentically as possible.

Jin-Ah returned to the State Legislature in 2018 to work on policies as a Session Aide in the office of Senator Bob Hasegawa. Even in their short time staffing a whirlwind 90-day session, they pushed our state towards a better direction. Jin-Ah advised the Senator on an amendment ensuring that opioid overdose education would include concerted outreach to Limited English Proficient (LEP) communities. The amendment passed, and the state Department of Health will soon release their outreach and education plan, complete with guidelines for LEP communities.

The 2018 Legislative Session convened at the brink of the #MeToo movement’s viral explosion, and Democratic leadership called a “come all” dialogue for legislative staff to discuss their concerns regarding sexual harassment and reporting. But, leadership wasn’t giving platform to women of color to talk about the compounding challenges of discrimination that women of color experience. Jin-Ah forced the topic and minced no words in standing up to the Majority Leader.

“With all due respect, you do not know what it’s like to be a woman of color,” Jin-Ah retorted. They caught major flack for it when leadership complained about them for “stepping out of line,” but they knew they were right.

“I am a temporary staffer – my time at the legislature ends after session, but women of color will still be here who aren’t in a position to speak out. If not me to call them out on their bullshit, then who?”

After session, Jin-Ah stayed engaged in local politics, dedicating time to strengthening the local democratic party by imploring it to be a more representative, accountable, and diverse body of dedicated volunteers. They came out to the world as polyamorous and genderfluid. They loved hard on the new friends they made, and the old ones alike, including their beloved white kitty. They were active during the Black Lives Matter protests, bringing relief supplies to demonstrators in need of food, water, and milk to soothe their burns. They played piano, traveled, and sang.

There is nothing about this human that doesn’t reveal something profound and poetic. They were action-oriented and never held back pursuing what made them alive and free. They lit up the world and now, from where they are, they continue to give us someone to look up to.

“I have begun slowly realizing the true image of myself. It reflects everything I do especially in my quest to save others like me. Stay true to yourself.” – Jin-Ah Kim