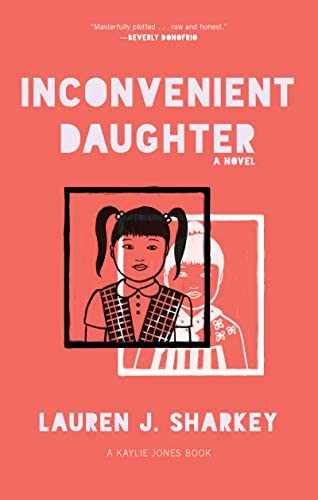 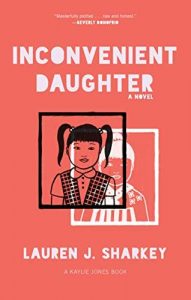 Marginally based off of Lauren J. Sharkey’s experience as a transracial adoptee, An Inconvenient Daughter is her debut novel. At the age of three months, Lauren was adopted by a Caucasian and Catholic family from Long Island, New York, which is the same for Lauren’s character in her novel, Rowan Kelly. Lauren’s biological identity is South Korean, which is also the same for Rowan. Her debut novel is almost personal, eyes widening towards transracial adoption and what a bond truly means for both adoptees and their adoptive families. Lauren has an A.A., a B.A. in Multidisciplinary Studies, and an M.F.A. in Creative Writing and Literature.

This novel is about Rowan Kelly and her story as a transracial adoptee, growing up Catholic on Long Island, New York. At first glance, Rowan’s family life is perfect. Her adoptive parents are middle class, do not have problems or conflicts amongst themselves, and show unconditional love towards Rowan and her younger adopted brother. Though this portrayal of an American dream seems like a dream and evokes privilege in many ways, there is no denying the fact that it is a shocking experience to realize you’re not from your mother’s womb, but someone else’s, that your biological culture is completely different from your adoptive family, and that you have came a long way through a chance opportunity. It is only a matter of time Rowan internalizes negative aspects of adoption and her identity, trying to understand the facts that are found on her adoption papers. She starts to develop a rebellious streak starting with lying to skip church. Deep inside, she expresses constant bitterness towards her biological mother. She names her biological mother “BioMom,” and throughout the novel, it is apparent she feels like a lot of her problems were because BioMom had left her for adoption the first place. Scrutinizing her existence, Rowan pushes away her adoptive mother, questioning her true intentions on why she had adopted the first place and if she truly loves Rowan as her own. The novel is about coping and feelings of rejection. The novel is about finding belonging as a transracial adoptee.

Each chapter starts off where Rowan is in an examination room with a sweet yet ignorant nurse, the chapter then flickering amongst different parts of the past. It is apparent that Rowan’s actions are fueled by intense feelings of rejection and her adoption being the center of her pain. Often mentioning her mother and BioMom, she is trying to find the reason for both their intentions as mothers. Without finding a straightforward answer, Rowan with a sense of shame and anger, has a need to become a first choice once and for all. Rowan finds herself consumed by a lover, mistakes his passion towards her as a feeling of self-worth, abruptly finds herself in a violent and abusive partnership with him.

Rowan succumbs into a lifestyle of casual encounters with random men from Craigslist personals. By having these encounters, Rowan realizes that it does not make her feel good nor does it give a solution to her innermost problems. Trying to reconnect with her mother, Rowan feels rejected once again as her mother seems like she does not care about her anymore. She further spirals into mindless sexual and intimate encounters until the end, where the real reason why Rowan has ended up in the examination room is revealed. There is something beyond what is a bond by blood.

This novel is about Rowan navigating herself and coming in terms with the answers that were always there. It is about her relationships and how that can define her existence. That being said, there could have been development in Rowan’s relationship with her mother, whom she had a complex push-pull, because the conclusion with her mother lacks depth. The novel also has a buildup so intense and flavorful, but all of that buildup does not effectively contribute to the conclusion, making the ending bland. Some parts of the novel seem left open-ended, lack depth, and needs more development. The novel is quite a straightforward, shallow read with no underlying messages to uncover. Lauren is a good storyteller and is able to convey her emotions and feelings well into her book. It is interesting to read and made me wonder which parts are true to her real life story and which parts are pieces of her imagination. An Inconvenient Daughter is a novel that dispels common conceptions about transracial adoptees. It is meant to trigger unsatisfied feelings. It is an honest perspective on transracial adoption and the complex relationships that may arise with it.