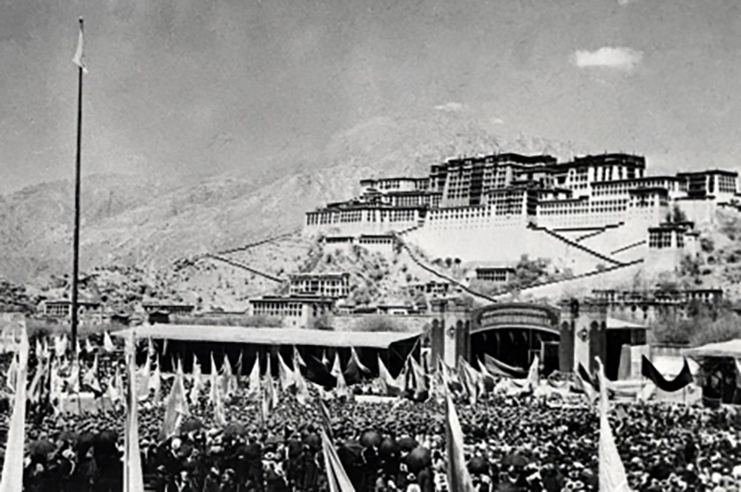 In 1951, China had taken over Tibet. Since then, millions of Tibetans were forced to flee their homeland and seek refuge in other Asian countries. Among them were my grandparents. My maternal grandfather recalls leaving his hometown of Kham at the age of 14. “My brother and I packed up and had to leave with our father… we went because the Dalai Lama had been exiled.”

The Dalai Lama is the most important figure in Tibetan Buddhism. He is essentially the embodiment of “Bodhisattva” or the Buddha of Compassion. Since the unsuccessful 1959 Tibetan Uprising, the Dalai Lama had been exiled and fled to India. This was the real beginning of the decline of Tibetan culture.

A large number of monasteries and cultural artifacts were destroyed and the Panchen Lama, the second most important figure in Tibetan Buddhism, had been abducted by Chinese authorities. Ever since then, China has taken complete control over Tibet’s natural resources as well as the liberties of the people.

Because of this, many Tibetans have revolted through self-immolation. 156 Tibetans have self-immolated since 2009. The majority were monks and nuns and some were even teenagers. These protests have occurred all throughout China and also in Nepal and India. Self-immolation had gathered more attention than previous protests. But it was strange — no revolt or damage had been done during the protest, yet it still spoke measures. This type of protest was only seen once before with a man named Mahatma Gandhi.

Peaceful protests. You’ve probably heard of this phrase quite a bit especially during the current movement of Black Lives Matter. We’re all fighting for the same thing: freedom against violence and oppression.

When the BLM movement first began, it began with a bang. Riots broke out and looting occurred. This quickly gained attention and communicated that people were fed up with the injustices.

Since then, there has been a great decline in the level of violence in protests. People have turned back to peaceful protests. In fact, politicians and leaders have encouraged peaceful protesting, but many argue that peaceful protesting doesn’t get anything done. Alicia Garza, the co-founder of Black Lives Matter, said to the New Yorker, “It’s a familiar pattern: to call for peace and calm but direct it in the wrong places… why are we having this conversation about protest and property when a man’s life was extinguished before our eyes?”

As a Tibetan American living the United States and seeing all the large-scale sentiment over injustices and also praise for peaceful protesting, I’m surprised that Tibetans self-immolating isn’t being seen or even talked about.

Peaceful protests can be a hit or a miss. They can be overlooked because they aren’t very aggressive and unfortunately, they often don’t have a lasting impact. Extreme peaceful protests (like Gandhi’s hunger strike), where people’s lives are on the line, get the most attention. It’s aggressive and extreme but without damage. These protests get the attention but I’ve found that it is very short-lived.

“Since 2002, my envoys have conducted six rounds of talks with concerned officials of the People’s Republic of China to discuss relevant issues. However, on the fundamental issue, there has been no concrete result at all. And during the past few years, Tibet has witnessed increased repression and brutality.” The fundamental issue, according to the Dalai Lama, is China’s lack of legitimacy in Tibet—a result of the state’s apparent inability “to pursue a policy that satisfies the Tibetan people and gains their confidence.” (Tsering Woeser, “Why Are Tibetans Setting Themselves on Fire?”).

This statement sparked motivation in the Tibetan people. Life in Tibet was becoming increasingly more oppressive and the Tibetans in Tibet had almost no methods to communicate that to the outside world.

The Tibetan people have always been peaceful and non-violent. It’s a part of our culture. We constantly value and practice compassion and selflessness. In our case, violent riots and uprising didn’t help at all (1959 Tibetan Uprising). It actually made the situation a lot worse. Many casualties occurred in the uprisings; they were simply not reported by the Chinese government.

Tibetans had turned to self-immolation to publicize and reach a larger audience about just how many people are truly suffering under the Chinese rule. This was something China couldn’t control, and the ones who made the ultimate sacrifice saw a bigger cause.

“I have always tried to emphasize one area of frequent misunderstanding: self-immolation is not suicide, and it is not a gesture of despair. Rather, it is a sacrifice for a greater cause, and an attempt to press for change, as can be seen in these two peaks in self-immolation.” (Tsering Woeser, “Why Are Tibetans Setting Themselves on Fire?”).

When the self-immolations first started to happen, the movement had gotten a decent amount of publication. Platforms like the New York Times and NPR shed light on the protests. Recently, the attention  has died down. Nowadays, the internet is everywhere, even sparsely throughout the Tibet Autonomous Area. However, this is something China controls so it is difficult for Tibetans to publicize.