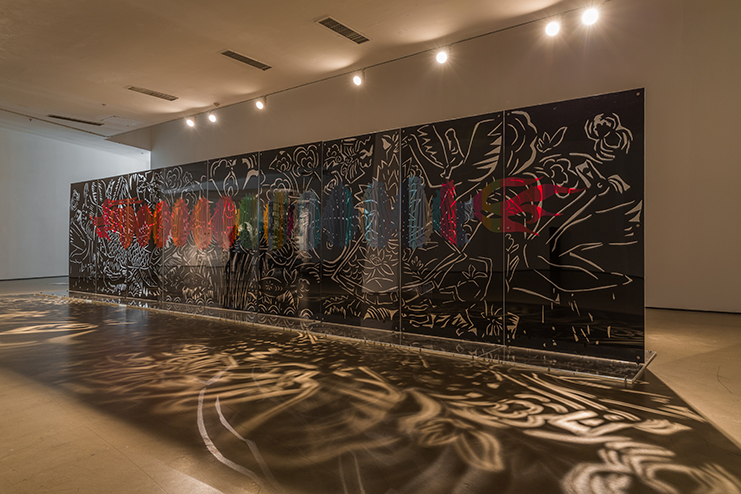 Dragons can be found all over the world, in the fairy tales, legends, and origin stories of many cultures. Dragons from opposite sides of the world meet in the National Nordic Museum’s current exhibition, Paper Dialogues: The Dragon and Our Stories. For this show, artists Bit Vejle of Norway and Xiaoguang Qiao of China have created a brilliant cohort of dragons using only paper and scissors.

Vejle and Qiao are internationally recognized masters of the art of cutting patterns and pictures out of paper. Papercutting originated in China over 1,500 years ago and migrated to Europe via the Silk Road. It has been practiced for centuries in Asia, Scandinavia and other European countries, and more recently in the Americas. Traditionally viewed as a folk art, training is informal, passed down through families, mostly by women.

Bit Vejle learned papercutting as a child in Denmark, making grekkebrev, letters decorated with paper cutouts that are sent anonymously at Easter. She loved the craft but pursued it almost secretly, thinking her friends would regard her as nerdy and old-fashioned. One of Denmark’s most famous papercutting artists was Hans Christian Andersen; the beloved 19th century author created narratives in paper that paralleled the fairy tales he wrote. Vejle came to appreciate papercutting as an art form and continued to work at it as an adult, after moving to Norway. A colleague from the TV station where she worked saw her paper pieces and was so intrigued he put her in touch with the National Museum of Decorative Arts in Trondheim, Norway where she had her first show a year later. Since then, she has had numerous museum shows, published a book of her paper art, and received commissions from prestigious design brands such as Hermés and Georg Jensen.

Vejle wanted to explore papercutting’s roots in China and, with the support of the Norwegian government, traveled there in 2008, to exhibit her work and do research. She was looking for a Chinese artist to work with on an exhibition celebrating the 60th anniversary of the establishment of diplomatic relations between Norway and China in 2014. She found the ideal collaborator in Xiaoguang Qiao.

Qiao is an artist and a scholar. A professor at the Chinese Academy of Fine Arts in Beijing, he works in oil painting and ink, as well as papercutting. As director of the Academy’s Intangible Cultural Heritage Research Center, he has traveled throughout China, studying and collecting examples of indigenous cut-paper art. His work to preserve China’s papercutting tradition contributed to UNESCO’s designating it an Intangible Cultural Heritage in 2009. Qiao works in a contemporary style, with references to Chinese folk art and a range of influences from other cultures. He created a series of papercuts based on the American novel, Moby Dick. In 2011 he traveled to the U.S., spending a week in Chicago where he received a commission for a work to be permanently installed at O’Hare International Airport. In 2015, he completed the series of 15 large papercut panels depicting iconic landmarks in Chicago and Beijing.

Although Qiao and Vejle had to speak through translators, they found a common language in their art.

“As soon as I met Professor Qiao, we simply just clicked,” Vejle recalled in an interview. “I don’t know if it’s something special about papercutters, but we could…just communicate.” They agreed on the dragon, a mythical figure in Chinese and Norwegian cultures, as a theme that could connect their work. The Chinese dragon is auspicious, embodying knowledge and power over the natural environment. Chinese people believe they are descendants of the dragon. The Norse dragon originated in the Viking era and takes several forms, some serpent-like, some with wings that can fly. Like the Vikings, their dragons are warlike, but are generally revered as a force that drives away evil.

Both Qiao’s and Vejle’s work is much larger in physical scale and narrative scope than that of traditional paper cutters. Yet the level of precision and fine detail that they achieve with only scissors and paper must be seen to be fully appreciated. For Paper Dialogues, each created their own interpretation of the dragon. Qiao’s is 27 feet long, cut from a rainbow of colored papers. Titled “Fish and Dragon Change,” its body is a double helix like DNA, with a fish tail. Layered on a black paper field of plants, animals, and birds of the land and sea, Qiao’s dragon visually dominates, yet coexists with its environment. Mounted between sheets of glass and dramatically lit, it can be viewed from both sides, casting elaborate patterns of shadow on the gallery floor.

Vejle created “Seven Dragon Eggs,” large elliptical cutouts of white paper, dense with symbolism and cultural references. The largest, about five feet tall, is the first piece viewers see on entering the gallery. It is a visual anthology of present-day Norway: its people, natural resources, cultural and mythological figures, and symbols of its peaceful relationship with China. The other six ‘eggs,’ each about three feet tall, flank Qiao’s dragon along both sides of the gallery. Three depict Norway’s history; two look to its future, where dragons protect today’s treasures: the natural environment and scientific knowledge. The last egg is uncut except for a tiny bird on top. In Scandinavian lore, the bird lands on a mountaintop once every century to sharpen its beak; when the mountain has been ground away, one second of eternity will have passed. It is a hope that our planet will endure, and a warning that even small actions have consequences.

Paper Dialogues opened in 2014 and has toured to venues in China, Europe, and the U.S. A showing on the British island of Jersey inspired local artists to respond with work of their own. Layla May Arthur’s 12-panel tour de force in cut paper, “Jersey: My Childhood Home” (2019) is now included in the exhibition.

Paper Dialogues: The Dragon and Our Stories is at the National Nordic Museum in Ballard through January 31, 2022. Information at NordicMuseum.org or 206-789-5707.