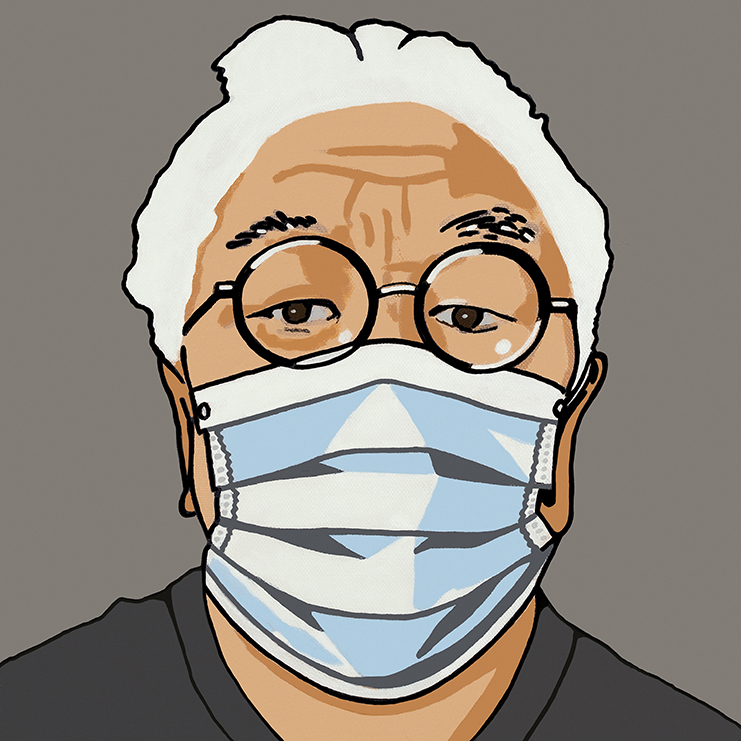 Like most of us, Roger Shimomura has spent the last 10 months in isolation; in his case, his home and studio in Lawrence, Kansas. For Shimomura, the pandemic has been an intellectually fertile, artistically prolific period. The result, 100 ”Little White Lies” is now on view at Greg Kucera Gallery. The 100 untitled paintings, each a 12 by 12-inch square, are numbered in the order in which they were created starting in late 2019. Hung in a single row that wraps around two galleries, they do not form a narrative. They are a stream of consciousness, a visual record of the ideas that occupied the artist during this strange year.

As a child during World War II, Shimomura and his family were sent to the Minidoka concentration camp. As a graduate student, he became enamored of Pop Art and its appropriation of commercial images. When he settled in Kansas in the 1970s, he was viewed as a foreigner by many in his largely white community. These experiences motivated him to interrogate and integrate themes of ethnic and cultural identity through art, a direction that has continued throughout his career. His paintings layer iconic works of Japanese and western art with racial stereotypes and commercial imagery. His work is ironic, humorous and angry, sometimes simultaneously. All of these ideas are present in 100 ”Little White Lies.”

Some images are simple memories of Minidoka: a child turning cartwheels outside the barracks (#23), a Japanese American soldier leaving his family behind barbed wire to go to war (#24), flowers and birds that brightened the stark camp environment (#81, 95).

Many of the paintings juxtapose ideas from disparate eras or cultures. A middle eastern woman (#64) or a Latinx woman (#52) portrayed in World War II concentration camps are warnings: the racism that produced those camps is alive today. Andy Warhol’s iconic portraits of Marilyn Monroe from the 1960s are superimposed onto several backgrounds: the barbed wire and armed guard towers of Minidoka (#9, 53) and a mosque (#50); the stereotype of the glamorous white woman pushing non-white cultures into the background. In the 1970s, responding to questions about why he didn’t make “Japanese” art, Shimomura did a series of paintings riffing on ukiyo-e prints, a tradition as foreign to him as to any American. Geishas from those paintings now resurface in foxholes opposite soldiers from World War I (#70), WW II (#69), and Vietnam (#47), calling out the western history of wars in Asia.

But a knowledge of Shimomura’s past is not required to appreciate this present body of work. A master painter, he uses color and composition to create mood and elicit emotion. He can pack a lot into a 12-inch square. Disney’s Alice (#2) confronts a claustrophobic Wonderland of racist cartoon characters: the menacing mob crowds in from the edges of the canvas. A geisha is trapped between giant cartoon brush strokes from a Roy Lichtenstein painting (#27); abstraction becomes prison, West subsumes East. Dark colors and concentration camp settings portend danger (#12) or menace (#26), but also background a scene of resilience (#90).

Shimomura includes a number of self-portraits. He makes himself a proxy for targets of stereotyping and prejudice: a Muslim behind barbed wire (#7); A geisha’s reflection in a mirror (#18). He slyly substitutes his Asian face for whites in famous works of Pop Art (#6, 8, and 34). He goes face-to-face with racist stereotypes, in anger (#14) or judgement (#96). The last two images in the show (#99, 100) are portraits of his wife and himself, masked for the pandemic. In the end, we are all in this together.

100 ”Little White Lies” is on view at Greg Kucera Gallery in Seattle through January 30. All the images in the show are online at gregkucera.com and are included in the catalog, with an essay by art historian and curator Sue Taylor, available at the gallery.