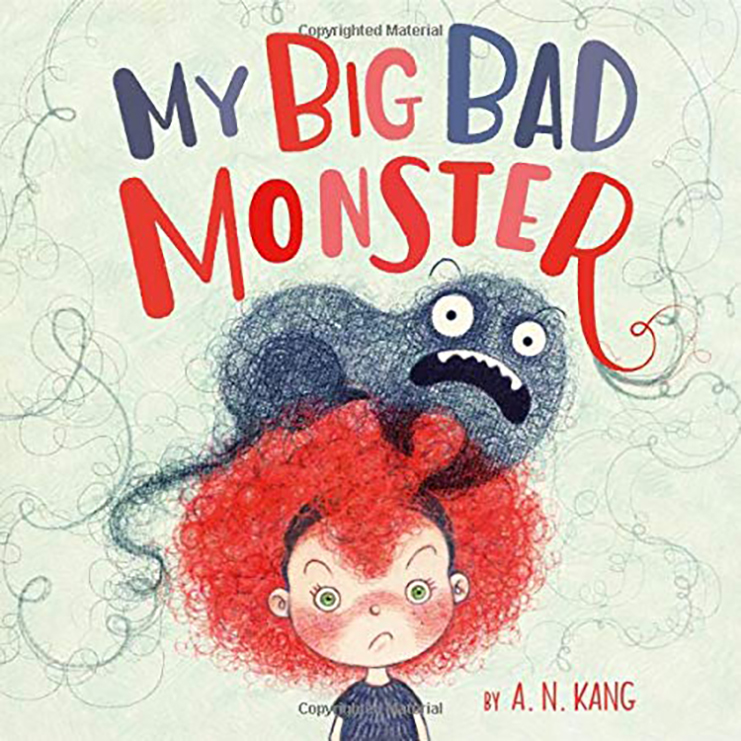 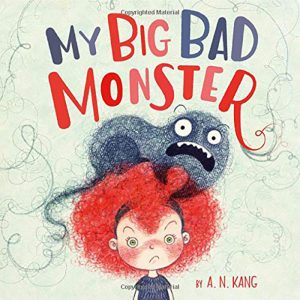 In the children’s book, My Big Bad Monster by A.N. Kong, a monster spawns from the wall of a girl’s bedroom uttering unintelligible ZZZZZPT sounds and scribbles on her drawings. It grows as the girl becomes more self-critical. And it becomes monstrous in proportion the more she lets it disproportionately affects her everyday life.  In the classroom, the monster is given free range, tearing her down while students in the classroom sit with mere shadows.

The white, male teacher is disturbingly oblivious as the girl’s self-talk destroys her self-esteem. His classroom behavior management skills are in need of improvement as kids chatter, play with paper airplanes and read their own book.

Tendrils of the monster’s black hair match the same texture of red locks on the girl’s head suggesting it came from the depths of her consciousness. The black curls may also represent pollution. The smokey trails could easily be seen as anti-nature.  As she stares into the mirror, she sees the monster like a pimple sprung from clogged pores. Whether or not this is intentional, it is significant in that the monster does hover above and weighs in on her every thought and action. Self-doubt, bullying, hurt feelings are all byproducts of the monster who live inside of her.  Can the girl successfully free herself from this parasitic relationship?

A.N. Kang’s background patterns printed on light ivory linen and horizontal stripes create a warm, personal glow. The effect is similar to having art on stationary which is sure to endear readers to the girl as she struggles in her daily life.  Even in her lowest moments, there is a suggestion of hidden hope.

More illustration than text, My Big Bad Monster is suitable for reluctant readers. Word bubbles and variation in text size communicate troubled emotions and the secret inner language between the girl and her monster. It isn’t all serious text, however, because there is levity and creativity. How do you get rid of a toxic monster that looks like soot and behaves like a clingy imaginary frenemy?

Those who work with young toddlers can use the book to teach socio-emotional learning. Parents who want to use dialogic reading with their children can ask: How do monsters show up? What are creative solutions to monster-busting? Such answers would be timely for a world in need.  Starting early, identifying the monsters and making sure they never get a platform is a healthy way of raising children and making sure they never pollute their lives.