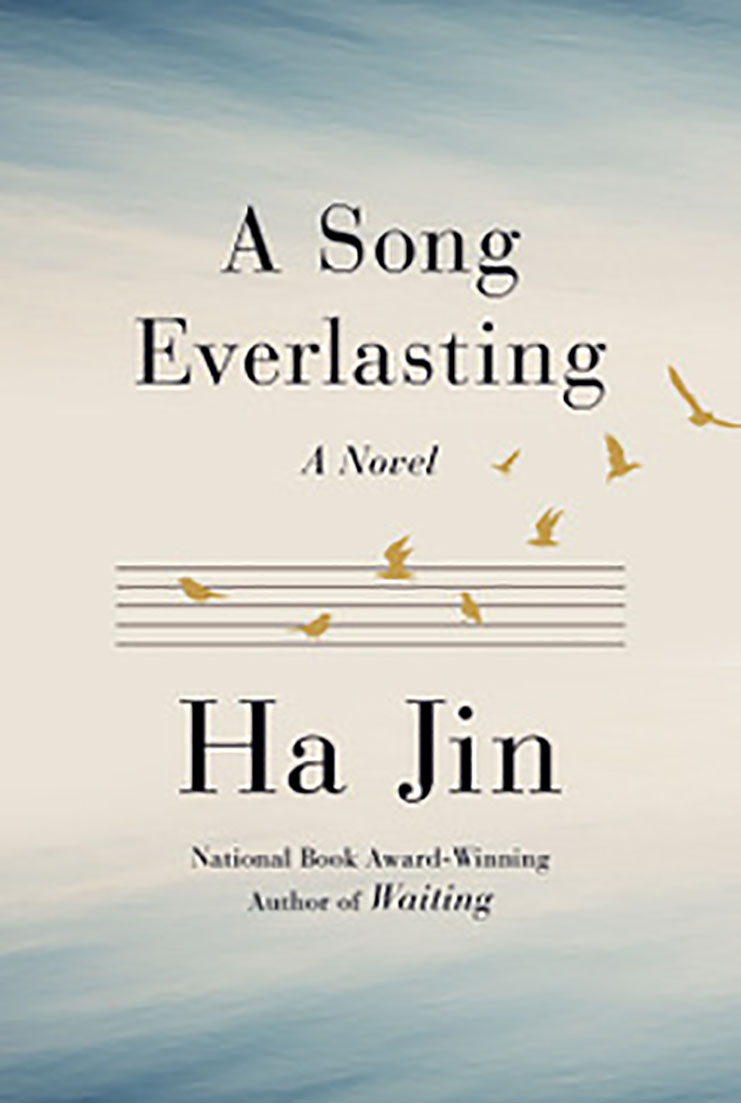 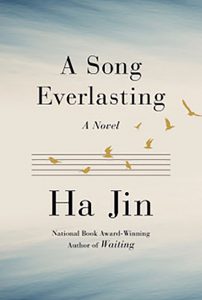 There is a Chinese curse, “May you live in interesting times!” And as we still inhabit the drama of the COVID-19 pandemic and 2020, it’s a breath of fresh air to read a story set in “less interesting times,” a story about a human being in pursuit of freedom.

A Song Everlasting is described by the publisher:

“From the universally admired, award-winning author of Waiting and The Boat Rocker , an urgent, timely novel that follows a famous Chinese singer severed from his country as he works to find his way in the United States.

After popular singer Yao Tian takes a private gig in New York at the end of a tour with his state-supported choir, expecting to pick up some extra cash for his daughter’s tuition fund, the consequences of his choice spiral out of control. On his return to China, he is informed that the sponsors of the event were in support of Taiwan’s secession and that he must deliver a formal self-criticism. When he is asked to forfeit his passport to his employer, he impulsively decides instead to return to New York to protest the government’s threat to his artistic integrity. With the help of his old friend, Yabin, Tian’s career begins to flourish in the United States. Soon placed on a government blacklist and thwarted by the State at every turn, it becomes increasingly clear that he may never return to China unless he denounces the freedoms that have made his new life possible.

But Tian nevertheless insists on his identity as a performer, refusing to give up his art. Timely, moving, and important, A Song Everlasting is a story of hope in the face of hardship, from one of our most celebrated authors.”

The novel is set in the early 2010s, which seems like an entirely different era. It is an “idyllic” time before the turmoil of the Trump era, the anti-immigrant agenda, racial reckoning, Asian hate, and the COVID pandemic. Without the milieu inserting itself as a HUGE character demanding to play a part, we can focus on the novel’s protagonists. Tian also stays mostly inside the U.S. Chinese community, thus avoiding the ever-seething prejudice against Asians. In this way, we get to focus on other aspects of Tian’s life in America.

The book is aimed towards the general English reader. Ha Jin also places nuggets of Chinese culture for the Chinese audience, like the scattering of Chinese idioms, the allusions in speech to the natural world, animals, plants, water and mountains. When he meets new people, Tian notices that they speak with distinct regional Chinese accents. Some passages portray a Chinese way of not expressing what is in one’s mind, but perhaps that is more universal than just Chinese.

The novel explores the ideas of freedom, love and belonging through the eyes of a sometime reluctant immigrant Tian. In his quest for freedom, he is sometimes thrust into being political. He is forced to examine his old ideas and reconcile with new ideas. Just as in real life, we sometimes get what we wish for, but not in the way we envision. Perhaps Ha Jin’s genius is how he takes the readers through a transformation of Tian’s life almost without their noticing. Yet the story is not a dramatic roller coaster ride. It is more like a river that flows through a corridor of unexpected turns, still staying inside its banks.

As Tian embarks on his American life, he now has freedom of choice. But what does he choose? For one thing, Tian chooses how to make a living. He chooses his musical gigs, the songs he sings, and the ones he doesn’t want to sing. On the flip side, he now has to be responsible for his livelihood which can be hard. “I love freedom more than anything else, even though Freedom can be frightening and paralyzing, even though it takes a long time for me to get used to it.”

In his search for freedom he begins to re-examine, even re-define what freedom is. And what is success? What is love? What is happiness? For instance, he thought that if he stayed true to his passion, he’d succeed. However, he begins to see that his old definition of success no longer matches his new concepts anymore.

Tian considers Thoreau a teacher: “His idea of freedom was pure and absolute. Solitude is a path to freedom for which you must accept everything that happens to you including hunger disease and even death. You’re supposed to be responsible for your own existence, body and soul.”

Tian innately understands that freedom is not something one can learn through a book, or by thinking. It is something to live through. It is to shed one’s past, façade, status, embarrassment and brainwashing. Like Thoreau, he has to open up to his circumstances, and “accept everything.”  This leads Tian to meet (or more like bump into) other unexpected teachers along the way.

His journey takes him from experiencing outward freedom to feeling inner freedom. One might associate this kind of freedom as more “Chinese”: a freedom of the mind, a Daoist or Buddhist kind of freedom from the ego, and from illusions. It is to be free of or be less of the world. It is to be more at ease with one’s surroundings.

Ha Jin has a real distaste for the totalitarian regime in China, and the reader can taste it too. He describes the people of position and power as corrupt: “As an official in China, it’s impossible to get by without taking bribes and kickbacks, because all your colleagues do that. If you were different, you would become their enemy, an obstacle to their path to wealth. They’d get rid of you sooner or later. Among wolves you have to behave and howl like a wolf regardless of your own feelings and sense of decency.”

China’s agents, both in China and abroad, resort to all kinds of tricks, including false accusation and character assassination. They play to the basest of human behavior. Another immigrant describes China, “The air is bad there, and the water is polluted. There’re so many additives in the food. The environment is so ruined that the whole country has been reduced to an immense junkyard.”

But Ha Jin also points out that there is a degree of security, living in a totalitarian regime like China. Many people prefer security to freedom. As long as they just want to live uneventful lives, within the rules, they are taken care of. They don’t have to think too much or be responsible for themselves. Once in the U.S. and out of China, Tian can see the old rules, as his friend Yabin says, “Since birth, we’ve been caged by all sorts of rules, some of which we have adopted as our way of life even as part of ourselves.  I can’t help wondering if they’ve been coded into our DNA.”

Of course, living in the US is no walk in the park either, especially for an immigrant. Tian deals with being torn between two worlds, and his lonesomeness in the new world. And survival is sometimes a matter of luck, or having a friend, a guiding hand, or having connections.

The novel does not play into the myth of the model minority. We do not encounter Chinese doctors, lawyers, engineers. Indeed the Chinese characters are construction workers, insurance salesman, musicians. Not all are driven by material success. Many live in the lower middle class. And they see the dignity in work, no matter what the work is.

A Song Everlasting is a fun read if only for Tian’s story in a new land. And you can also invest more energy to savor the deeper story of what freedom is, and what makes life worth living.