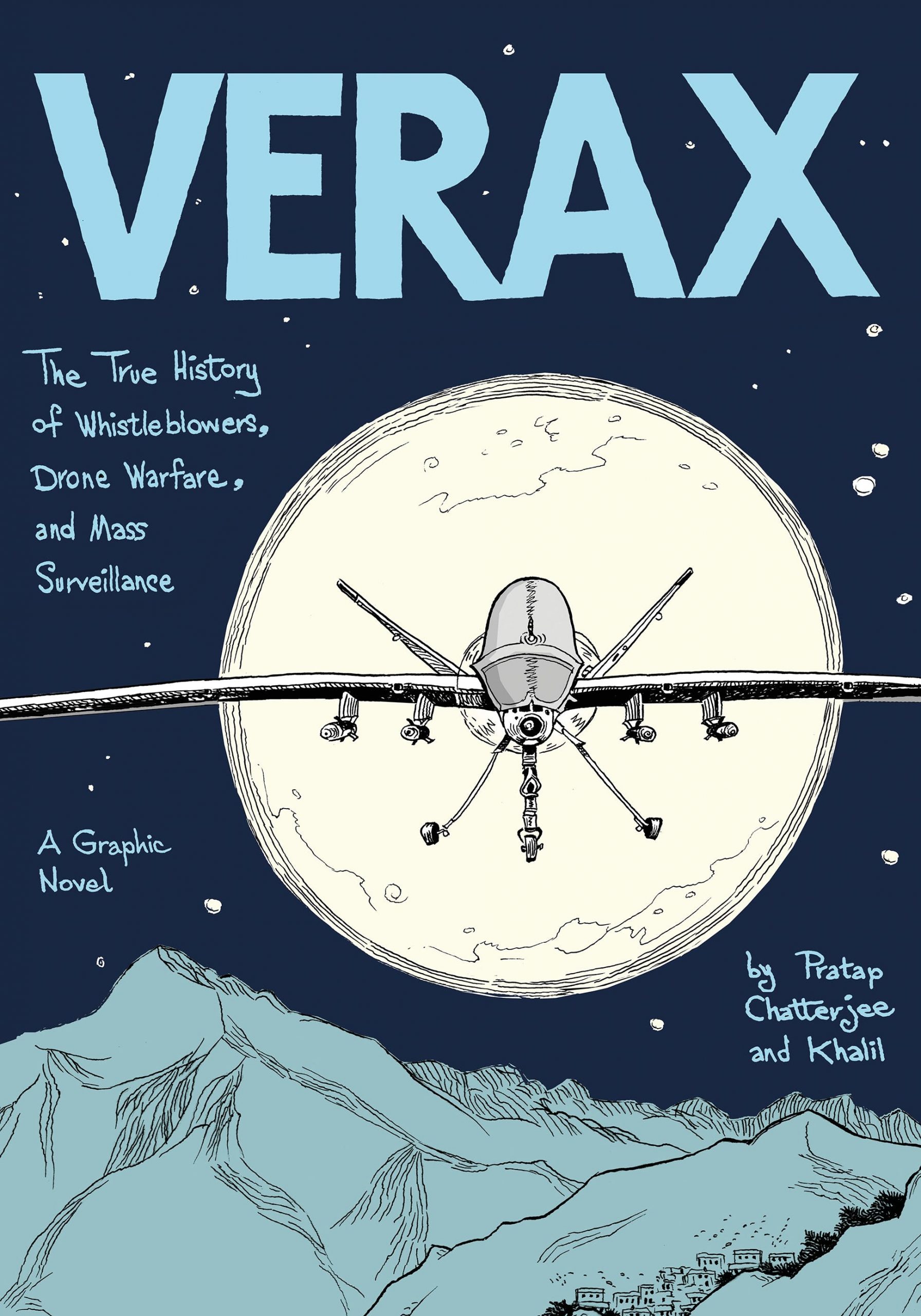 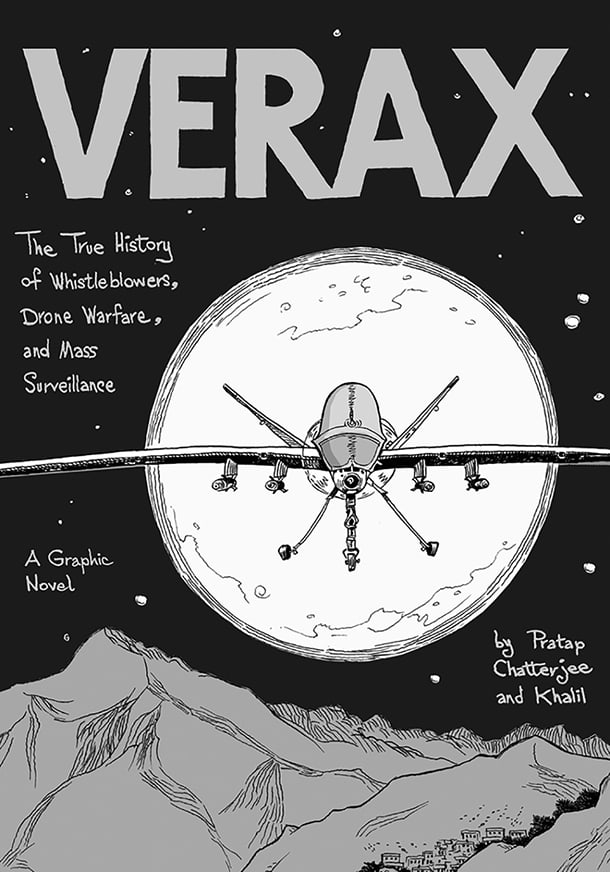 The book connects the dots about how unmitigated mass surveillance, overreaction to the threat of terrorism, pursuit of profit by surveillance companies and the unwillingness of the U.S. Congress and mainstream media to check a haphazardly run apparatus continues a never-ending spiral of death and destruction paid for by U.S. taxpayers.

In the process of vividly demonstrating this destructive cycle, Chatterjee and Khalil (Khalil Bendib omits his last name on his book covers) also celebrate the whistleblowers and investigative journalists who are the keys to exposing and then possibly taming this out of control beast.

The book starts with a scene “somewhere in Central Asia” of a drone monitoring a family in a house and a group of people playing soccer. The drone is controlled by U.S. military personnel in a base far away from the drone.

This opening scene highlights the absurdity of a situation which many Americans may be distantly aware but until now have not considered its moral or practical consequences. This juxtaposition — of innocent civilians in a foreign country monitored without a warrant or legal recourse — leads the reader to ask a host of disturbing questions.

On a moral level, should anyone — U.S. citizen or not — be randomly monitored without being under suspicion of committing a crime or act of ter to stop the United States government from using the same surveillance techniques in the United States itself? If innocents can so easily be killed abroad due to mass surveillance, why can’t innocents within the United States be arrested — or even killed — for crimes they never committed? How is the use of mass surveillance to kill suspected terrorists abroad to prevent possible terrorist attacks any different from the once futuristic Tom Cruise movie Minority Report where people are arrested in advance of supposed crimes they will commit?

Chatterjee and Khalil juxtapose the dangers of mass surveillance and its killing of innocents with the stance from many members of the U.S. Congress who argue that if you have nothing to hide then do not worry from mass surveillance.

The authors also show how corporations are deeply invested in a mass surveillance state given that much of the software and devices used for government mass surveillance are privately produced. Khalil, the cartoonist, draws multiple scenes of Chatterjee going to security expos where private surveillance companies openly hawk their wares.

In the book, Chatterjee attempts to interest editors of publications to invest in his reporting of these surveillance companies and the victims of drone attacks. He is confronted by the reality that, as he states in the book, “editors like smoking guns, dead bodies, sensational stuff.” He is also finds that the mainstream media are no better at holding the mass surveillance apparatus to account. As Chatterjee states in the book, Washington, D.C. is a “[…] cozy world […] where journalists agreed not to challenge the secret state in exchange for ‘anonymous’ sources […]”

In an interview with the Examiner, Khalil argued that the coziness between the mainstream media and the U.S. government has helped lead to historical disasters like the Vietnam War, the 2003 invasion of Iraq and the current unwillingness to question drone warfare and mass surveillance. Khalil and Chatterjee also forcefully argued that the current fixation by The Washington Post, The New York Times and other mainstream media outlets on the outrages of the Trump administration’s policy has resulted in an unwillingness to question the Obama administration’s policies.

According to Chatterjee, who has reported directly from the U.S. wars in the Middle East and Central Asia from the George W. Bush administration until now, President Obama was just as brutal and aggressive in ordering strikes that have killed innocents as Trump has been and if anything he sped up what President Bush began.

It is an unlikely coincidence that Verax itself has not been reviewed by either The Washington Post nor The New York Times despite the fact Khalil himself is a New York Times bestselling author and Chatterjee has written multiple critically acclaimed books.

If the U.S. Congress and the mainstream media cannot be counted on to check the mass surveillance apparatus, both in the book and in interviews Chatterjee and Khalil hailed the whistleblowers who have exposed surveillance abuses as our greatest hope.

When asked what we as concerned citizens can do, Khalil said “Democracy is a never-ending struggle. Organize, talk to your neighbor, never relax.” Khalil said he is very heartened to see the level of organization and enthusiasm for action amongst young people, citing the organizing for Senator Bernie Sanders’ presidential campaign as a specific source of hope.

Chatterjee did note, however, that he is “not sure voting for president will change much” in terms of stopping unmitigated drone warfare. He argued that supporting watchdog organizations like the ACLU or CorpWatch (where he works currently), investigative journalism, and whistleblowers are practical steps.

Chatterjee asked that people also check out killchain.org for specific details on the interplay between private and governmental interests surrounding surveillance drone warfare. Both authors encouraged people to go to the website for Verax (veraxcomic.net) to view other practical suggestions about how to fight back against out of control mass surveillance.