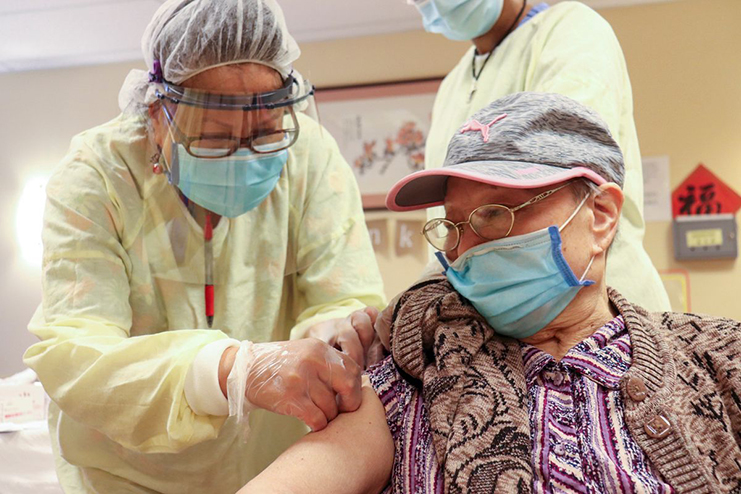 At the end of 2020, the first doses of the COVID-19 vaccine arrived in the Chinatown International District for healthcare workers, residents and staff at long-term care facilities.

The vaccine comes as “a ray of hope,” in the words of Daxa Sabhaya, registered nurse supervisor who led vaccinations at Legacy House, ICHS’s assisted living facility.

“When we got the first shipment — I still recall that shipment came right before Christmas on December 22nd — it was like a Christmas present for everyone,” said Rachel Koh, chief operating officer at ICHS.

Doses of the vaccine were administered to staff at ICHS and Kin On, residents of Legacy House and Kin On’s Rehab & Care Center. Some staff have received a second dose.

“There’s been a great amount of excitement and relief,” said Sabhaya. Elders living in Legacy House are especially vulnerable to COVID-19. And while they have had programs and activities to keep them busy, most have been relatively constrained to the building. “Hopefully this will give them a little bit more hope to be able to do more things,” Sabhaya said.

As the state enters into phase 1B/Tier 1 of vaccine distribution — now, everyone 65 and older can get the vaccine, as can people 50 and older living in congregate settings — much is still uncertain.

The ability of states and providers to expand vaccine distribution suffered a blow recently after the Washington Post reported in mid-January that the federal government does not have a stockpile of second doses that it promised to release. Both COVID-19 vaccines authorized in the U.S. require two doses to be effective, separated by about three weeks.

On January 15, several Democratic Governors, including Jay Inslee of Washington and Kate Brown of Oregon accused the federal government of deceiving states about vaccine availability.

It appears states will be able to receive the second doses they need for now, the Post reported. With regard to vaccine availability, ICHS communications coordinator Theo Bickel said in an email: “We will continue to work closely with our state and local partners to examine the implications of the changes.”

The process of administering the first vaccine doses at ICHS was complex. Administering the vaccine always required planning, but ICHS wasn’t given much notice about when it would get a shipment. On a given day, they might be told they would get 100 doses. “Now the engine has to start — how do we vaccinate those 100 doses, this week?” Koh said. “It is very chaotic, to say the least.”

At Legacy House, staff first needed to learn the details of the Moderna vaccine, how to store and thaw it, said Sabhaya. Because the Moderna vaccine only lasts six hours after it’s thawed, they needed to vaccinate in groups of 10 so it wouldn’t be wasted, and plan appointments accordingly.

A lot of Legacy House residents don’t speak English fluently, and many have memory problems or dementia, Sabhaya said. Getting consent for vaccination sometimes took some extra steps, such as calling up family members who have power of attorney.

While ICHS was prepared for residents to experience negative side effects of the vaccine, none did, Sabhaya said.

Residents and staff at Kin On’s nursing home and assisted living facility have been looking forward to receiving the vaccine, said Kin On CEO Min Chang. A few staff and residents caught COVID-19 during the pandemic, though none have for several months.

At first, Chang wasn’t sure how many residents and staff would be willing to get vaccinated, but ultimately 80 percent of residents and 60 percent of staff across Kin On’s two facilities did. “It went like clockwork. We were able to get everyone who wanted to be vaccinated vaccinated,” she said.

People’s concerns were mostly about potential side effects, and allergies to vaccines, Chang said, and a medical doctor at Kin On was able to answer questions and alleviate concerns.

Chang hopes more staff will take the vaccine at future clinics at the end of January and in February.

Between 30 and 40 percent of ICHS staff were also reluctant to take the vaccine at first, Koh said. “There is also some hesitancy because the vaccine was developed pretty quickly as well as having emergency use authorization,” she said.

But many came around after an internal education campaign at ICHS, wherein staff who took the vaccine shared their experiences in an email chain, including whether they experienced any side effects.

Hopefully, having Legacy House residents vaccinated will make it easier to loosen some restrictions, allowing family members to visit and residents to go outside for longer in the future, Sabhaya said. But until ICHS receives guidance from the CDC specifying what vaccinated people can do, the organization will still follow strict safety guidelines, she said.

Staff and residents at Kin On will likewise continue practicing social distancing and using PPE even after receiving the vaccine, Chang said. “I think it gives us that added kind of arrow in the quiver, if you will, to fight against COVID,” she said. “But I don’t think it takes away any of the uneasiness per se.”

The state recently moved past Phase 1A of vaccine distribution, which at first limited its availability mostly to medical workers and people living and working in long term care facilities. This means that for now, home care aides have not received the vaccine.

Many people who live and work in the CID do not fall under the priority category yet, but ICHS still wants to help vaccinate those who want it.

This will require more planning, and will have to wait until a future phase, Koh said. The process might resemble how ICHS administers the flu vaccine in the community, working with partners like SCIDpda to find out which specific populations would benefit first — for example, seniors living in congregate settings — and then arrange a vaccination event, Koh said.

Finding a site for mass vaccinations close to ICHS clinics will require some creativity, not to mention rental fees, said Koh, and staff equipped to handle the complex requirements of the vaccine.

Pending new relief funding from Congress, Public Health – Seattle & King County is facing a funding cliff for its COVID-19 response program, including vaccinations, and expects to run out of funding at the end of January. For ICHS, this has meant the organization has been performing vaccinations using its own staff, without funding support from the County. “It’s going to put some stress in our system,” said Koh.

But the sooner the whole CID community can be vaccinated, the sooner the neighborhood can start to recover, Koh said. “I hope that we will be able to contribute to that.”

Correction: An earlier version of this article incorrectly described Daxa Sabhaya as supervisor of the Healthy Aging and Wellness Program at ICHS. In fact she is a registered nurse supervisor at ICHS. The error has been corrected.