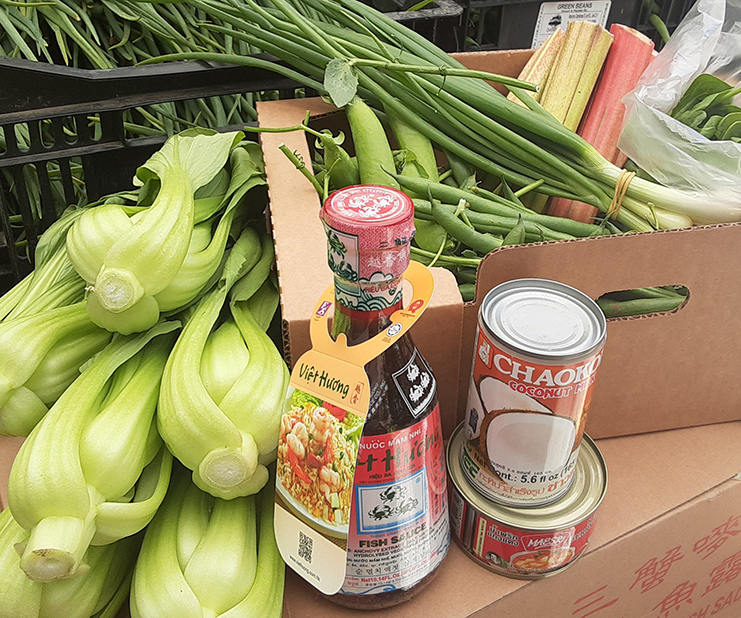 “I am not a superwoman. I do a lot of things, some things I do very well, and nothing I do is perfect”.

But according to Friendly Vang-Johnson, the founder of Friendly Hmong Farms, her mission is not to be perfect. But to give back and create change through community solidarity.

“As a mother of four, I am ever more convinced that raising children must mean exemplifying to your children how to carry oneself in the world,” said Vang-Johnson. “I believe that the time that I spend on building Friendly Hmong Farms and the movement it represents, gives my children insight on how to follow their own dreams, while at the same time, being in community with others.”

Born and raised by Hmong refugee farmers in Minnesota, Vang-Johnson began her work in 2020 as a volunteer for the Hmong Association of Washington helping to deliver produce and flowers produced by Hmong farmers. As demands grew, she then helped launch Friendly Hmong Farms, a Community Supported Agriculture (CSA) which sources products from Black and Brown farmers and sells them to customers through the Seattle area. Between 2020- 2021, her team of volunteers and partner organizations raised more than $750,000 for over two dozen farming families.

And starting in April, Friendly Hmong Farms is teaming up with Tuk Tuk Box, a women-owned company that offers curated subscription boxes highlighting Southeast Asian Culture and experiences through food.

“We are collaborating with Tuk Tuk Box to offer a ‘A Taste of SE Asia’ a curated box of peak-season fresh produce (veggies, herbs, fruits) from local Black and Brown farmers accompanied by artisanal, pantry staples and recipes developed by SE Asian chefs,” said Vang-Johnson. “This box is a continuation of our work to advance food sovereignty, land reparations and racial justice.”

Vang-Johnson’s passion for racial and social justice became more evident as she began to see the structural racism many BIPOC farmers in Washington were facing when trying to secure both federal and state loans and other funding sources. She said her own family experienced this firsthand when she was trying to buy land for her mother to farm in Western Washington last year.

“They basically told us they ‘could make a buffet but they couldn’t force people to eat.’ In other words, USDA/FSA officials were of the mind that it was simply the fault of BIPOC farmers who didn’t want to make use of their programs and funds,” said Vang-Johnson. “They completely ignored the structural racism that was codified in their program application process. One example is the requirement of a signed purchase and sales agreement to be submitted before the government would process a loan application. BIPOC farmers are at a disadvantage here for many reasons including how many who come to own lands lose them to predatory lending and other discriminatory practices. Also, many BIPOC farmers don’t normally live in areas where their (rented) farmlands are located because they feel safer and more secure in urban areas close to their friends and families.”

The International Examiner reached out to Steve King, Farm Loan Chief with USDA/Farm Service Agency in Washington State.  He said there are loan programs set aside every year for individuals classified as “socially disadvantaged” producers (females and minorities). He said the big challenge for many, especially new farmers, is the cost of the land. And with the money and risk involved, the government requires potential farm buyers to have at least 3 years of experience in managing farmlands. He also said according to the latest Census of Agriculture, the percentage of minority farmers in the state is 8.6% of the total number of farmers. And between 2020-2021, the Farm Service Agency reports that in Washington State, 33.5% of the loans and loan guarantees made by the FSA were given to socially disadvantaged producers.

“I admit it’s not easy to find a piece of ground without local connections,” said King. “We try to work with the rules that we have to make it a palatable situation. One of the best ways to make changes is coming up next year with the new farm bill. People can work with legislators to bring about changes they want to see.”

Vang-Johnson is now working with groups like the National Young Farmers Coalition to try to elevate the voices of young and BIPOC farmers across the country. This aligns with the summer youth program she launched in Washington and now expanded to Minnesota where she is currently living with her family. The mission is to get teenagers to recognize the importance of food sovereignty and racial justice. The same values Vang-Johnson wants the working BIPOC farmers to understand and that their lack of access to land ownership is not a reflection of their failings.

“It’s all about building that trust and relationship with these farmers,” said Vang-Johnson. “We want them to see that we need to change the structure and that what they are experiencing is NOT Okay. Our partnership with Tuk Tuk Box has solidified our grassroots community approach.  Their connections to chefs, artists and graphic designers, especially, does justice to communicating the beauty and integrity of our farmers’ produce.”

For more information on “A Taste of SE Asia” curated box, visit www.tuktukbox.com or www.friendlyhmongfarms.com. 10% of each sale will go to the United Communities of Laos to help build a cultural center in the Puget Sound metropolitan area.