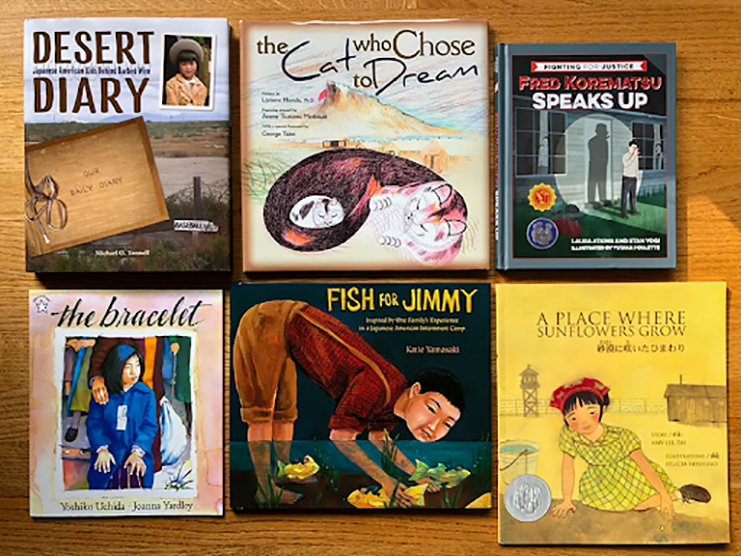 ”二度とないように” (Nidoto nai yoni) – This phrase means “Let it not happen again,” and can be read on the Bainbridge Island Japanese American Exclusion Memorial, where the first Japanese citizens were forcibly removed from their schools, jobs and homes during World War II.

This phrase is a call to action for Kai Vanderlip, a junior at Tesla STEM High School who founded the Day of Remembrance Japanese Incarceration Literature for Libraries. The main goal of the project is to educate Lake Washington elementary school students about the World War II Japanese American incarceration camps through children’s books and to prevent these violations in the future.

As an elementary student in the Lake Washington School District, Vanderlip remembered briefly learning about Executive Order 9066. He shared that he never really learned about the camps in depth, despite the civil rights violations Japanese American citizens faced.

“We need to stand up for other groups and be the friend for others that the Japanese American community didn’t have during the incarceration,” Vanderlip said.

He did further research on the topic for a project when he was in the fifth grade at the suggestion of his family, which is when he learned that some of his relatives were incarcerated.

In sixth grade, Vanderlip asked a question to Lori Matsukawa, then KING 5 news anchor, during an online screening event of “Prisoners in Their Own Land: The Story Behind the Story” when children should start learning about the incarceration camps, to which she responded: as early as possible.

“I kind of thought of that out of the blue,” Vanderlip said. “I can teach this to elementary school students through picture books.”

He felt called to take action with the rise of anti-Asian hate crimes and assaults due to the pandemic and spent over a year and a half creating this project.

Vanderlip read through numerous children’s books related to the subject to ensure elementary school children would be able to understand and teamed up librarians in multiple elementary schools to review the books. The books were then sent to elementary schools in the Lake Washington School District in February 2022 to commemorate the 80th anniversary of the Japanese incarceration.

Vanderlip’s former elementary school, Ben Franklin Elementary School, hosted the first launch of these books, even earning a round of applause from fifth graders after a reading of Fish for Jimmy.

Associate principal of Tesla STEM High School, Cynthia Burt wrote in an email that Vanderlip worked with the equity club to organize and package the books while he presented information, its purpose and the importance of his project.

“I am grateful to Kai for taking action in educating others, from preschool to adults, about the Day of Remembrance,” Burt wrote.

Ben Franklin Elementary Librarian Leann Clawson said in an email that Vanderlip’s book assortment did a great job of representing a mix of nonfiction and historical fiction books.

“Our younger generations need to learn this history, accurate history, so that they understand how and why our society operates as it does,” Clawson wrote. “Learning history helps to build understanding, and hopefully empathy, for one another.”

Vanderlip received grants and discounts for the books from various organizations like the Kirkland Youth Council, the City of Kirkland, Lake Washington Schools Foundation, Brick and Mortar Books in Redmond Town Center and Martin Pearl Publishing.

Martin Pearl Publishing gave signed copies of The Cat Who Chose to Dream by Loriene Honda since the distributor was unable to get copies.

In an email, Honda said she was grateful and honored that Vanderlip included her book in his project.

“His impressive commitment to educating young children about this critical part of our country’s history will be of enduring benefit for many years to come,” Honda wrote.

Honda’s book follows the story of a cat who was snuck into an incarceration camp, since pets were not allowed in the camps. The illustrations of the book were created in an incarceration camp by artist Jimmy Mirikitani. Honda is a child psychologist and said in her email that the book is meant to teach children how to deal with anxiety and depression as well as learn about an important and painful time in American history for Japanese Americans.

She also used her own father’s experiences of incarceration at Manzanar in Inyo County, California to write the book.

“Widening the breadth of exposure to this important subject is imperative more than ever now, so that the invaluable civil rights lessons that can be learned from this unjust experience can be instilled in children as early as possible,” Honda wrote.

Vanderlip was ecstatic to receive signed copies from Honda as well as positive and kind feedback about his project. He is interested in law, psychology and English, so Honda’s book had a profound impact on him.

Initially, Vanderlip planned to come into classrooms to read the books to students, but because of the pandemic, he decided to create videos for teachers to play during their lessons as well as sending learning materials like worksheets for the students to do.

The project has had a profound impact on Vanderlip’s family and has received feedback that other kids have shared their family experiences in the incarceration camps.

“Using history to teach and educate children and to grow up to be a more equitable generation that will speak out against intolerance,” Vanderlip said was this project’s mission statement.