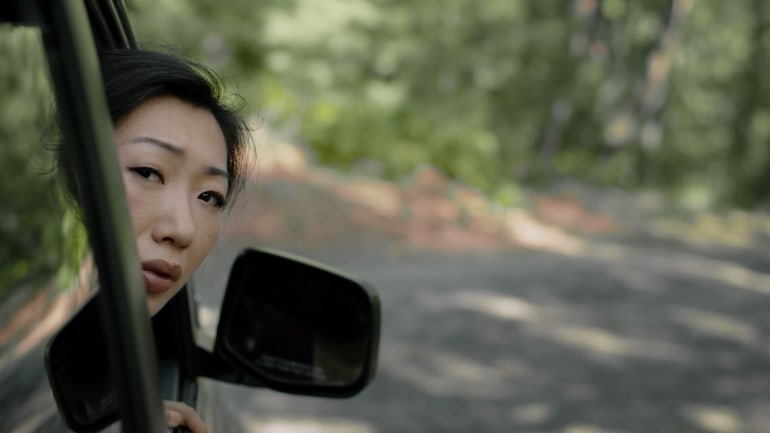 A neatly constructed film, A Picture of You, moves solidly through several levels of emotions expressed by two adult children after losing their mother. While its structure is rather basic, its layers are nuanced—simultaneously heartbreaking and heartwarming.

The film opens with sister Jen (Jo Mei) and brother Kyle (Andrew Pang) driving to their deceased mother’s home in the woods of rural Pennsylvania. Their bickering begins almost immediately. At the grocery store, they argue over what to buy and how to pay for their separate purchases. And, that’s just the beginning.

Jen, the bossy one, seems to carry a chip on her shoulder although it’s hard to discern why since Kyle was the one who sacrificed his marriage to care for his mother while she was ill. Perhaps the source of Jen’s chip is the tremendous boulder of guilt she harbors for having found excuses to not be available when she was most needed. In any case, she constantly picks at her sibling like a scab she can’t leave alone. For his part, Kyle feeds off Jen’s cranky assaults with digs of his own.

“I’m not annoying,” Kyle responds when Jen accuses him of being so.

Kyle is the responsible one, seething with a cool anger that he occasionally lobs as terse words towards his younger sister. As his mother’s caregiver for six months before she died, he’s a lost man on the verge of losing his wife through divorce.

Neither Kyle nor Jen seem to want to talk to the other about the woman who gave birth to them both. Rather, they appear to be hiding inside their own pain-filled closets, each dealing with her death differently. While Jen relives poignant memories of her mother teaching her how to use the rice cooker, Kyle rides his mom’s bike around the neighborhood—at times with no hands as if to show off his newfound freedom from care-giving.

As the siblings go about the business of packing up the house, they’re tasked with deciding what should be discarded and what should be salvaged, like their mother’s books with her handwritten notes inside its pages. As if trying to fix what’s too late to repair, Jen obsesses over petty details, triple-taping the packing boxes.

Further, she invites friends over, ostensibly to help, but more likely because she wants to avoid sharing her sorrow with Kyle. But just as her boyfriend, Doug (Lucas Dixon) and BFF Mika (Teyonah Parris) arrive, things go horribly awry. When Kyle downloads files from his mother’s computer, he discovers a shocking photo; the kind of picture no adult child ever wants to see of their own parent. Obviously, the group’s mission undergoes a radical change and, seeking an explanation of the offending photo, they mobilize in pursuit of answers.

Except for some inside jokes, there’s no reference to being Asian American here. Both Jen and Kyle are so contentedly assimilated into their surroundings that only a few comments about race are ever uttered, like when an elderly white man in a restaurant where the siblings are eating inquires if they are their mother’s children, and Jen unabashedly jokes, “Did you just racially profile us?”

Later, as Kyle greets Jen’s friends in the foyer, he orders, “Shoes off. We’re Asian.”

Nor is there a ripple when Jen’s Caucasian boyfriend, a nerdy techie, comments about the whiteness of the Pennsylvania eatery where they’re dining. “Everyone here is so white,” he blurts out. “Even the bus boys are white.”

Any one of the film’s four main characters—one white, one Black, and two Chinese American—could’ve been written as any ethnicity. A modern movie about contemporary people, this film features actors well cast and completely believable in their roles.

Undertaking such a heavy subject might have led director J.P. Chan to present a more tragic tale, but he skillfully encourages a playful story, gracefully sprinkled with humor. When Jen sobs to Mika, “I miss my mom,” it tears at the heart. But another scene has the group hilariously getting high on marijuana.

While this is an adult film, it’s far from pornographic. Instead, it accurately paints a portrait of grief experienced by those left behind when a loved one passes on. But it also demonstrates that hope can resurface through camaraderie and absurdity. A somewhat ordinary story about somewhat ordinary people facing the challenge of a lifetime, A Picture of You could be a picture of any of us.

A Picture of You screens as part of the Seattle Asian American Film Festival at Northwest Film Forum Screen 1 (large theater) on Saturday, February 14 at 6:00 p.m.