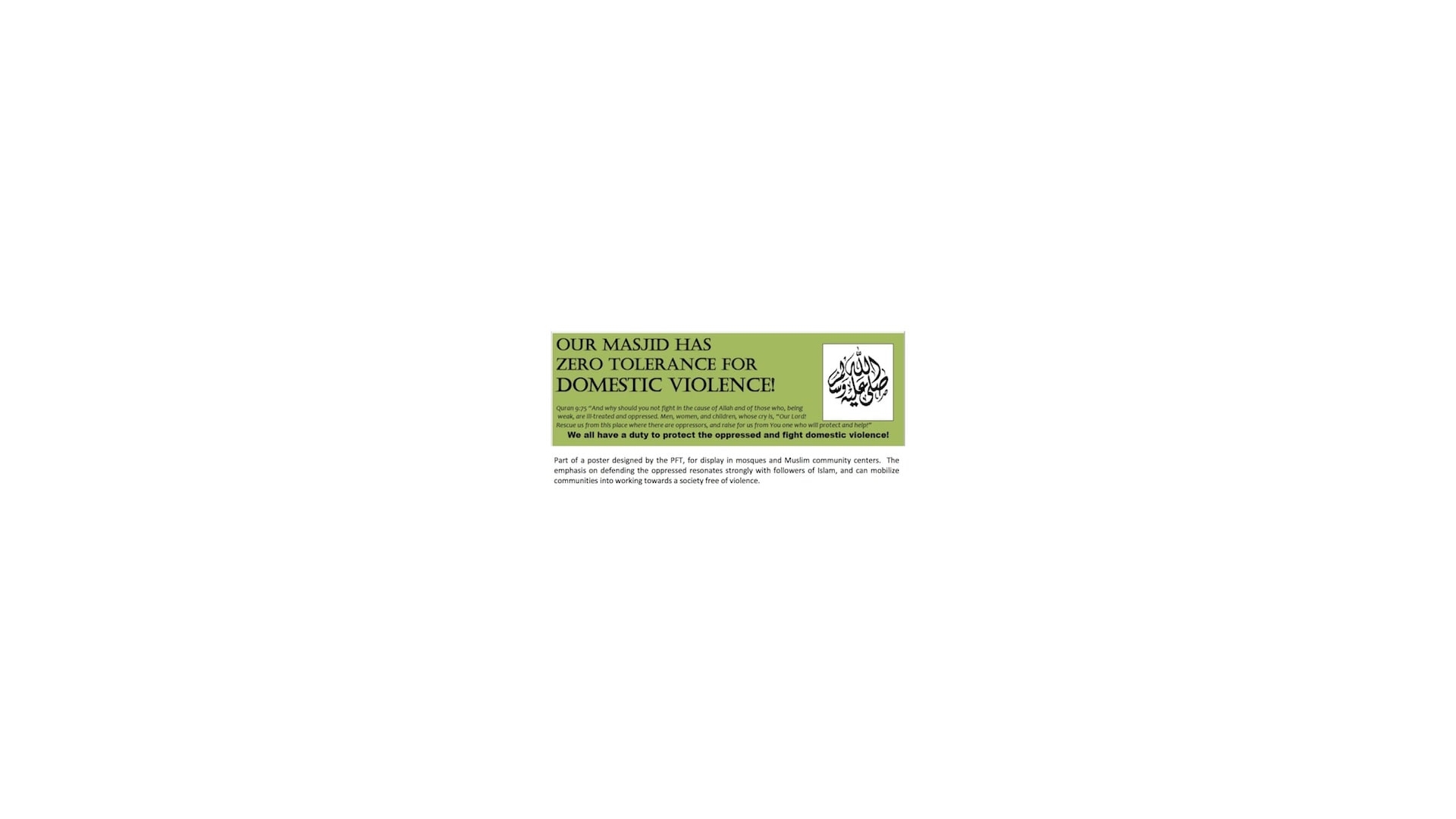 The Peaceful Families Taskforce (PFT) was established in 2003 resulting from collaboration between Sharifa Al-Khateeb, founder of the National Peaceful Families Project (PFP), and Sarah Rizvi, who was, at the time, a community mobilizer for Chaya (Chaya merged with the API Family and Safety Center in 2011, to form API Chaya). The project was initiated following a three-day conference for community members, which explored domestic violence within local Muslim communities, the resources available for survivors, and the needs and concerns of those groups. From the conference, about 30 community members emerged as volunteers to create the Peaceful Families Taskforce, which was coordinated by Chaya.

Since its inception, the PFT has worked towards raising awareness of domestic violence within local Muslim communities, to support systems and structures that contribute to the formation of peaceful families, and to provide assistance and resources to survivors of domestic violence. Over the years, the PFT has become a valued community resource, through efforts such as the development of informational and educational materials specifically for the Muslim community; the production of materials for imams on how to respond to domestic violence issues; providing trainings for Muslim community members on ways in which to support survivors; partnerships with local service providers and shelters; and the cultivation of relationships with masjids so that survivors are better supported. The work of the PFT is based upon the premise that a peaceful family is an Islamic tradition.

Working with faith-based communities raises a number of issues specific to that demographic. In addition to the barriers faced by survivors of domestic violence served generally by API Chaya, such as matters relating to immigration, income, and language access, Muslim survivors may experience additional obstacles preventing them from accessing services.

One of the barriers faced by survivors of faith is the intersection between cultural practices and religious teachings. Whilst the two are distinct in theory, there is a de nite blurring of the lines in practice. For example, PFT’s work in the community has shown that survivors are often reluctant to reveal situations of domestic abuse, believing that to do so would dishonor their family, and place into question their loyalty and commitment. Furthermore, certain cultural norms surrounding the notion of gender roles may also prevent a survivor from accessing services. For instance, the idea that the husband should be the breadwinner of the family, may discourage a survivor from seeking employment and therefore creating financial dependence on her spouse—a dependence which can potentially be used by the abuser to exert control, threaten, or otherwise manipulate her. In addition, some cultural beliefs place the responsibility of ensuring the well-being of the family (including keeping the unit intact) firmly upon the shoulders of the wife and mother, thereby posing an additional barrier upon a survivor who may feel ready to leave an abusive relationship.

A further barrier affecting some survivors from faith-based communities is the misinterpretation of religious concepts and texts, which can justify abuse and fail to hold the abusive partner accountable for his actions and behavior. For instance, a common idea present within some Muslim communities is that of a wife’s duty of obedience to her husband. Many survivors believe, based on this notion, that attempting to navigate their situation may lead them to act contrary to the wishes of their spouse and, therefore, compromise their piety. In turn, abusive partners may manipulate such ideas to further enforce control over their spouse. In cases where survivors do reach out to seek support from their community, friends and leaders may exhort the Islamic concept of patience as a means of providing comfort to the survivor. Whilst often well-intentioned, such counsel, which conveys the message that the abuse is a test of one’s strength and faith in God and therefore beyond mortal control, does not tend to empower a survivor who may be seeking more practical resources.

Whilst such challenges may be perceived as outweighing the benefits of commitment to a faith, the philosophy of API Chaya rests in the idea of empowering survivors and honoring their agency. In the words of Reverend Dr. Marie Fortune: “We should never ask a battered woman to choose between safety and the support of her faith community. She needs them both.” As such, the PFT works towards supporting communities in reexamining views, based on cultural norms and the misinterpretation of religious texts, which may be harmful to survivors.

The PFT raises awareness of domestic violence within Muslim communities based upon the Quranic Family Model, originally developed by PFP. This model (based on the teachings of the Quran, the holy scripture of Islam, and source of religious jurisprudence) takes a preventative approach, outlining the institution of marriage within an Islamic context. It describes the role of Muslims in an individual, familial, and societal capacity, drawing upon the principles of honesty, compassion, integrity, and justice—universal values that transcend a particular religion or culture. The model details spousal rights and responsibilities, emphasizes mutual consultation and cooperation between partners, and provides a guided process in managing marital conflict.

Utilizing the Quranic Family Model as a backdrop to the work of the PFT provides a clear distinction to survivors and community members as a whole, between the ideal Muslim family that they are striving to cultivate, and the harsh reality of an abusive marital relationship. In this way, cultural beliefs and misrepresented religious teachings can be reframed in a safe and respectful manner. For instance, the Quran refers to a duty of cooperation and consultation between spouses, and clearly states that obedience is due only to God, not to one’s marital partner. Furthermore, whilst an abuser may justify the mistreatment of their spouse based on a cultural belief that they have the right to discipline their family as they see fit, the Quran clearly states that, “He (God) has placed between you (spouses) love and mercy.” The Quran also recognizes that, despite attempts to keep a marriage intact, there are instances when divorce is the only viable option, and clearly defines the process. Such information can be a source of liberation for survivors of faith, providing them with options in managing their relationship with an abuser, without compromising their religious beliefs.

For communities that may be struggling with deep-seated cultural beliefs, describing domestic violence as a form of oppression can be a catalyst for transforming into a support network for the survivor, with the potential for holding an abuser accountable for their actions. This is based on numerous Quranic decrees to stand against oppression in all its forms, and to defend the oppressed.

The PFT aims to reach all sectors of local Muslim communities, including general members, youth groups, and faith leaders. The program tailors its curricula and materials to meet the needs of the communities it serves. A recent example of this was a partnership between the PFT and the Muslim Association of Puget Sound and its social services arm, the Muslim Community Resource Center, in developing a workshop for single parents and divorcees. The project served to provide an opportunity for participants, many of whom were survivors of violence, to consult with a panel of professionals for advice pertaining to their lives post-divorce. The workshop, which was established in response to requests from community members for such support services, was a beautiful example of equipping a community with the tools it may need to serve its members in an autonomous and sustainable manner.

A further example of community collaboration is an upcoming project on domestic violence prevention. API Chaya is in the process of developing a series of multigenerational training sessions on positive family relationships, aimed particularly towards faith-based communities. The planning stages have thus far been exciting for the PFT, as existing partnerships have deepened and created opportunities for further cooperation, and new connections have been made with communities, paving the way for its work to become more visible.

Increasing the accessibility of its work to local Muslim communities is crucial to the PFT at this moment in time. The recent rise in Islamophobia and resultant hate crimes against Muslims (which, studies suggest, have tripled in the last year) have impacted both the broader Muslim population, and particularly survivors of violence. Muslims communities have experienced assaults on their person and property, including vandalism of mosques, attacks on homes, and physical violence that has, in some cases, been fatal. Heightened Islamophobia has also resulted in a psychological impact on those from Muslim backgrounds, ranging from increased anxiety to depression.

The impact of Islamophobia on survivors of violence is heavy, and is in itself a systemic enabler of abuse. Many of the features of domestic violence, such as exerting power and control, minimizing violence, and victim-blaming are evident within a culture that is openly hostile to a particular segment of its population. They seep their way into the personal lives of survivors, with the potential to compromise autonomy and safety.

For instance, when a survivor of faith sees graphic images of a fellow Muslim woman being forcibly undressed on a beach in France by armed police, she may believe that calling upon law enforcement for help is no longer a viable option for her. When the murder of three young Muslims in their home is trivialized to having been the result of a parking dispute, a Muslim survivor may feel that their experience of abuse does not warrant reaching out for support. When a survivor constantly hears a barrage of media insults directed towards their faith, and in turn has to apologize for violent incidents that are unconnected to their religious beliefs, their psychological space becomes smaller. When Muslim survivors are nervous about speaking Arabic at the airport in case they are removed from their flight, their voices are, quite literally, silenced—they are walking on eggshells. In addition to creating a further barrier to accessing services, the impact of Islamophobia provides abusers with an additional tool to exert control and isolate the survivor – when prejudice is rife within mainstream culture, why would a survivor from a marginalized community consider seeking support?

Whilst these are trying times for the communities served by API Chaya, there are concrete ways in which to counter Islamophobia. Firstly, by looking beyond popular headlines, and seeking accurate information on Islam; secondly, by resisting false narratives and countering them; and finally, by reaching out to vulnerable communities, and showing solidarity in a political climate which serves to deepen divisions, and heightens fear and mistrust of the “other.” By strengthening community bonds, and showing unity in the face of adversity, we can become vehicles for social change and transformation.

For further information on becoming involved in the work of API Chaya or the Peaceful Families Taskforce, please contact [email protected]