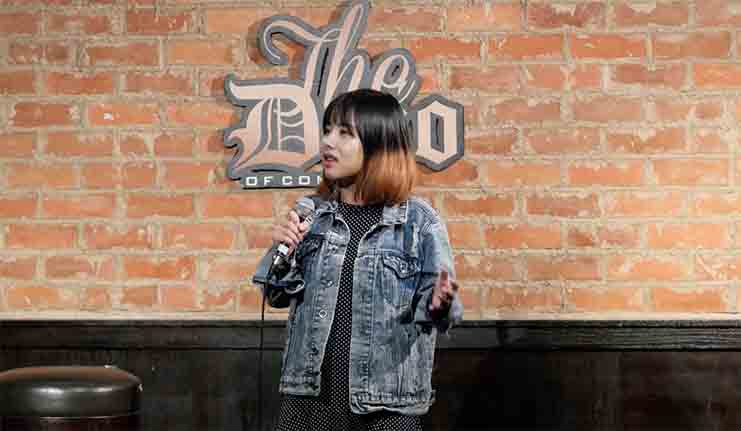 The first stand-up set Zeo New ever watched was Delirious by Eddie Murphy when she was in college.

“Before that I didn’t know stand-up is a thing, and I was always very interested to see, “can I do it?” because I consider myself funny, and as soon as I saw the Wechat article that a new open mic was starting in Beijing, I always wanted to go have a try,” New recalls. “The first time I went up, I killed, I guess, and the first time when I moved to the U.S., and I did stand-up in English in San Francisco, it went really well too, so for me this was really positive feedback and reinforced that I can do this.”

That first stand-up performance was five years ago in Beijing, and since then New immigrated to the United States, first to the Bay Area, before relocating to Los Angeles to pursue her dream of being a comedian and screenwriter. Now, she has performed in all the big clubs like Comedy Store and Paws, and goes out every day to watch performances and hone her skill.

Before moving, New was a journalist in China working for international media outlets, and she also worked as a professional translator. When she moved to the U.S. and couldn’t find a job in journalism, she became a real estate agent in order to make some sort of income. With this life, her first few years in the country became a huge struggle.

“I feel like I was walking in circles for the first two or three years selling houses, I thought to myself, ‘did I move to another country just to sell houses,’ and that thought scared me,” says New. “And then I quit, and set my mind to do what I wanted to do, and it wasn’t as scary as I thought.”

New started on video editing and other freelance roles that she felt would help get her to Los Angeles, which it did. She applied to and was hired for a full-time editing job that allowed her to make the move, and on the side she also took on a lot of translation work. Soon this became big enough that she was able to quit and run her own translation agency. Managing other translators who all work remotely allows she says is the perfect situation, as it allows for the flexibility to fully focus on comedy and writing.

Being so active in the Los Angeles comedy scene, New is familiar with the circuit, and says there are only about three other Chinese immigrants doing stand-up there, one being her good friend, and the other two are acquaintances.

“There is a stand-up comedy scene in China that only started about five years ago, so it’s a really new concept for a lot of people and it requires you to first, have great English, and second you need to be able to tell jokes that relate to people here, because you’re dealing with an American audience now,” says New. “Of course you can tell jokes about China, but you can’t bank role that forever.”

And of course, aspiring to be a mainstay in the L.A. comedy scene of course has other challenges.

“It is definitely not an equal playing field, I’m not blaming anybody, and I don’t think most people are not like, ‘I’m going to bring female comedians down, and they can never get ahead,’ that’s not really the case and it’s not really malicious like that,” New explains. “But the problem is, it is a Boy’s Club.”

“So every time I go to an open mic, even a showcase, it’s usually is a room full of guys, and me,” says New. “I’m usually one of the few minorities there, and then the minority plus being female, those two identities together, I’m usually the only one in the room.”

New share how “it can feel weird sometimes.” For instance, there are often times when she will be arriving to a place where she doesn’t know anybody and the guys will have already formed a group and be talking amongst themselves. And then New walks into the room.

“They look at me and they stop talking, because clearly I’m the outsider,” New says, with a chuckle. “I don’t think they try to regard me as an outsider, but that’s just the case, and you just have to deal with it.”

New says also, sometimes being a female or minority Asian comic can get her more opportunities, but that she doesn’t see it as a good thing.

“From my observation, a lot of the female comics here, how should I put it, they got opportunities when they are not ready, because they need a female,” says New. “For example, if you’re booking a show and you have ten people, and they are all guys, you have to put one or two females in there, and sometimes, you’re not qualified, you’re the token female, you’re the token Asian, and you have to be aware of that, like, are you really that funny.”

This sort of situation can really stymie growth, she says.

“Because funny is funny, at the end of the day,” she says. “Just because you get shows here and there, you have to think about, ‘am I getting booked because of funny, or because they need a token Asian,’ and it is kind of weird.”

All of New’s all-time favorite comics are not Asian, like Chris Rock, Eddie Murphy, and Dave Chappell, but she does like Margaret Cho, and Ali Wong, and respects what they have done for the scene.

“Margaret Cho, looking back, she paved the way for a lot of people, and what I really like is not just her comedy, I like her image, she doesn’t have the model minority type of image, she’s pretty cool, she’s pretty punk, she’s pretty dirty,” says New. “And Ali Wong, she works really hard, I really respect her journey.”

New explains how people often think comedy is a natural gift like art where a person is born funny, but she really believes you still have to be really hardworking. She points to how she read an article about Ali Wong, and that when she was coming up through the scene in New York, she would perform every day, five to nine times a night.
“This might sound cliché because I’m Asian, but I really appreciate her work ethic,” says New with a laugh.

New says from becoming familiar with the scene, she feels it takes about ten years to really make it, so she doesn’t have any dreams of becoming an overnight success. In the meantime, she continues to write and perform, and has also launched a podcast entitled “Immigrant Survivalcast.” where immigrants to the United States from a variety of countries share about their experience and give some life hacks, often taking a humorous spin on stressful situations.

“When I first moved, I was so confident: I thought the only thing that would hold a lot of immigrants back is the language barrier, and I don’t have a language barrier, and then the reality just hit me so badly,” New shares. “And at that time, I really wish there had been a show, or an outlet or something that can teach me how to cope with it, or not even teach me, but just help me to understand that I’m not alone, that everybody who moves, to some extent, experiences something like this.”

New has so far taped ten episodes that upon the release of each one is garnering a growing audience, and she plans to create more.

“Hopefully I can share some knowledge on how to get better accustomed to everything and really get ahead,” says New.

Overall, New feels her outlook is quite positive after taking her destiny into her own hands, and really recommends that for anybody else who has had a dream, to take control and take the leap.