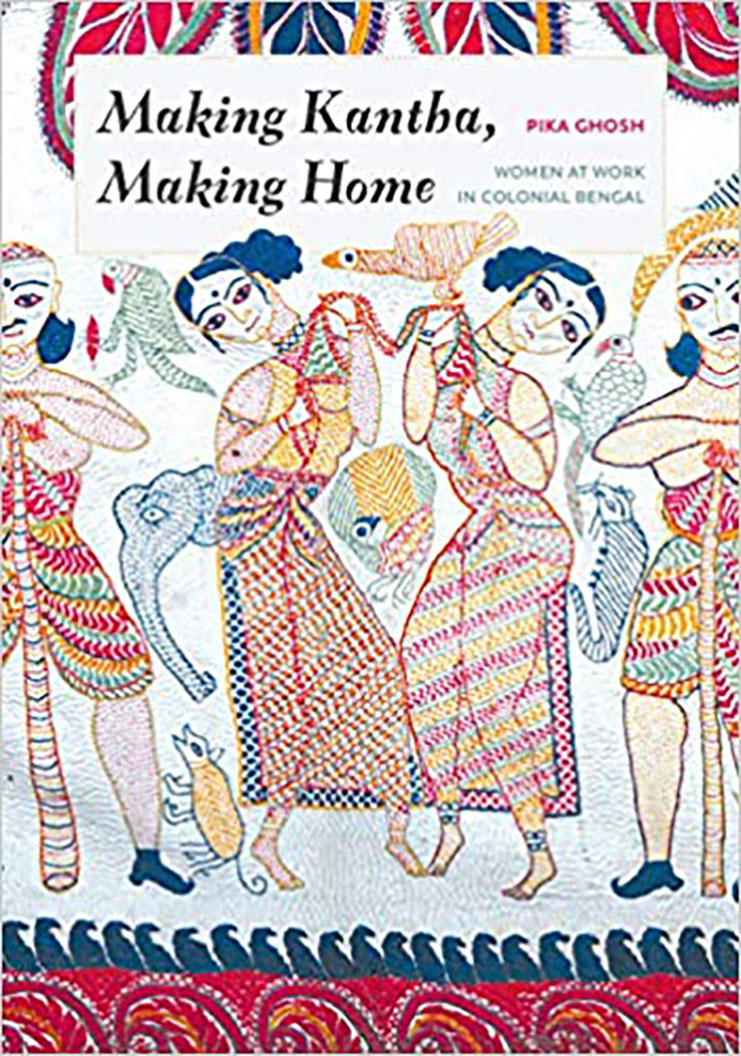 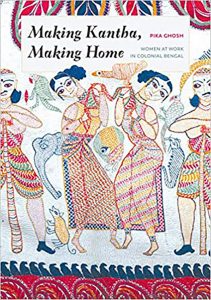 Pika Ghosh’s monograph Making Kantha, Making Home: Women at Work in Colonial Bengal introduces her readers to the womanly art of quilt making amongst Bengali women in South Asia. Kantha is often relegated to the realm of domesticity, receiving little scholarly attention. Ghosh’s monograph elevates kantha as a living tradition that enables women to express their own agency. Her treatise deliberately deviates from the 19th century intellectual engagement with kantha by art curators by going beyond the surface-level of the kantha as a decorative piece of cloth and speculates the intentions of the women behind these handiworks.

Ghosh starts her monograph with a personal anecdote of reading her child the story of the Velveteen Rabbit. This story of how a toy rabbit becomes ‘real’ due to the tender love of a young boy makes the perfect segue to introduce her readers to another story of love from halfway across the globe. Just like the velveteen rabbit, they become more than just inanimate objects due to care that goes into making and preserving them, often preserved across generations as family heirlooms. Kanthas started attracting scholarly attention during the turn of the 19th century, an era marked with widespread anti-colonial nationalism in India that propelled many intellectuals to elevate indigenous art forms. Ghosh writes about discourses around what can be considered as truly ‘Indian’ aesthetics that animated many art curators and artists during that time. And yet, the tension between traditional “crafts” and avant-garde “art” continues to shape intellectual discourses on art. It was during this heyday of nationalism that Kantha was briefly elevated as an art form worthy enough to be curated and displayed in museums.

In chapter 2, Ghosh focuses on the practice of making and caring for kanthas in their layers, thicknesses and resonances. Kanthas are tangible material things, requiring hours of careful work of putting together layers of old saris, backbreaking labor of stitching, and curating motifs that are then meticulously embroidered on the surface of the quilt. This chapter contains many touching ethnographic vignettes of families from all across the world, sharing stories of kanthas that have been preserved for generations and carefully brought out with each new generation of babies. Ghosh describes the ways in which women make these kanthas, often carving out time from their busy domestic lives, and what it means for those who choose to devote hours as it almost appears like a nesha – an addiction. She notes the care that takes into preserving the kanthas as they are passed on as tangible markers of love beyond the lifespans of the women who made them.

Chapter 3 focuses on “Manadasundari’s Gift,” an elaborately embroidered kantha that now resides in the Gurusaday Museum in Kolkata. This kantha was a gift from Mandasundari to her father. It features an exquisitely detailed mansion with its inhabitants both inside its rooms and at the threshold, surrounded by various scenes from streets that included a group of marching soldiers, a palanquin, an elephant with its riders, street entertainers and dancers, and a plethora of birds and animals. Ghosh carefully analyzes these themes by showing how they refers to prevalent social discourses on the Bhadralok (upper caste Bengali Hindu gentlefolk) culture during Manadasundari’s lifetime. One of the prominent motifs embroidered is that of the babu, or the Bengali gentleman who was often depicted as being overly fond of hedonic pleasures in 19th century Bengali literary works of satire. Ghosh also draws parallels between 19th century Kalighat paintings from Calcutta (now Kolkata) that depicted the delicate features of the immaculately dressed babu with Manadasundari’s embroidered babu complete with buttoned up shirt, trousers and boots.

Along with the various scenes of street life, Manadasundari’s work also stands out in its detailed attention to the domestic world or antarmahal of urban upper-class households. Ghosh particularly comments on the depiction of a threshold – the liminal space between the antarmahal (inner quarters) and the baharmahal (outer quarters) – where we see a couple stands at a doorstep, surrounded by ornate pieces of furniture prevalent in contemporary affluent drawing rooms. In an age where women had little access to leave their own marks in the public domain, Ghosh’s analysis enables us to view kantha making as an important vehicle of self-expression and social commentary as astute as the written words of the same time.

In Chapter 4 Ghosh analyzes another detailed piece of work, “Kamala’s Mandala,” which was on display at the Philadelphia Museum of Art in 2009/2010. Kalama’s kantha is dedicated entirely to the realm of the divine. It features an elaborate circular pattern with images of flowers and kalkas (paiselys) that are common in Bengali fabric to this day. Several embroidered scenes from Lord Krishna’s life surround this central mandala. Ghosh places Kamala’s kantha specifically within the greater context of Vaishnava bhakti tradition in Bengal that consciously celebrates the playful young Krishna and his antics. Ghosh quotes several contemporary devotional poems from the Bhakti tradition that emphasizes the passion of Radha, Krishna’s lover. She also reminds us that in social context of 19th century Bengal, religious devotion was one of the few avenues of self-expression for women. Seen from this perspective, Kamala’s kantha bears the testimony of its creator’s passion and her conscious engagement with literary and art genres of the day.

In the concluding chapter, Ghosh acknowledges the fact that kantha making is always a collaborative affair, requiring the labor many women almost all of whom remain nameless. Nevertheless, it remains to this day an art form that provides an avenue for self-expression for women. This is a book that crosses across genres, and can find its audience amongst anthropologists, gender studies scholars, and art historians alike. This is also one of those few books that can equally grace the coffee table of the casual art lover due to the many beautiful photographs of noteworthy kanthas and other art forms it contains.