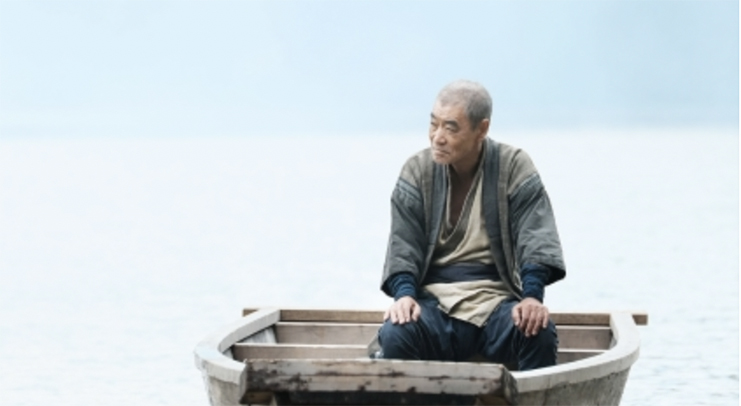 Visionary director Bong Joon-ho once said that, about his award-winning film Parasite, that “we all live in the same country, called capitalism.” He was expressing the idea that the basic conflicts within capitalism, between rich and poor, appear no matter where you live.

They Say Nothing Stays the Same, the first feature-length effort from director Joe Odagiri, explores a different type of conflict within capitalism – that of the all-encompassing push towards convenience and efficiency that could wipe away more traditional ideas and cultures.

Odagiri explores this idea through the main character of the film, Toichi. Toichi is a humble boatman, largely isolated from the world around him, who ferries villagers from one side of the river to the other where a town awaits them. It’s through this simple action that the film finds itself in a contemplative, meditative state, showing through beautiful imagery and a masterful score by Tigran Hamsyan the simple life of this boatman.

However, the two beasts of convenience and efficiency make their presence known as a bridge is set to be built near where Toichi crosses the river. There’s no doubt as to the value of the bridge – it will allow the villagers to cross over to the town with greater ease and in greater numbers, without needing to rely on a humble boatman like Toichi. Therein, of course, lays the central question that the film wrestles with. What, of our culture, of our traditions, do we need to sacrifice in order to gain convenience and efficiency? In our increasingly competitive lives, where structures and institutions are broken down and built back up to be better, faster, and stronger, do we have a need for a boatman like Toichi?

The film takes on these ideas as its beautiful imagery, shot wonderfully by Christopher Doyle, washes over the viewer. It’s easy to fall into a contemplative and meditative mood while viewing, watching Toichi cross the river, back and forth, over and over again, awash in calm blues and greens.

The movie is not without fault – some tonal shifts feel unearned, and there seems to be some tension between the long stretches of quiet contemplation the movie starts with and the more intense scenes towards the end – but, all in all, this is an extremely strong feature-length debut from Joe Odagiri.