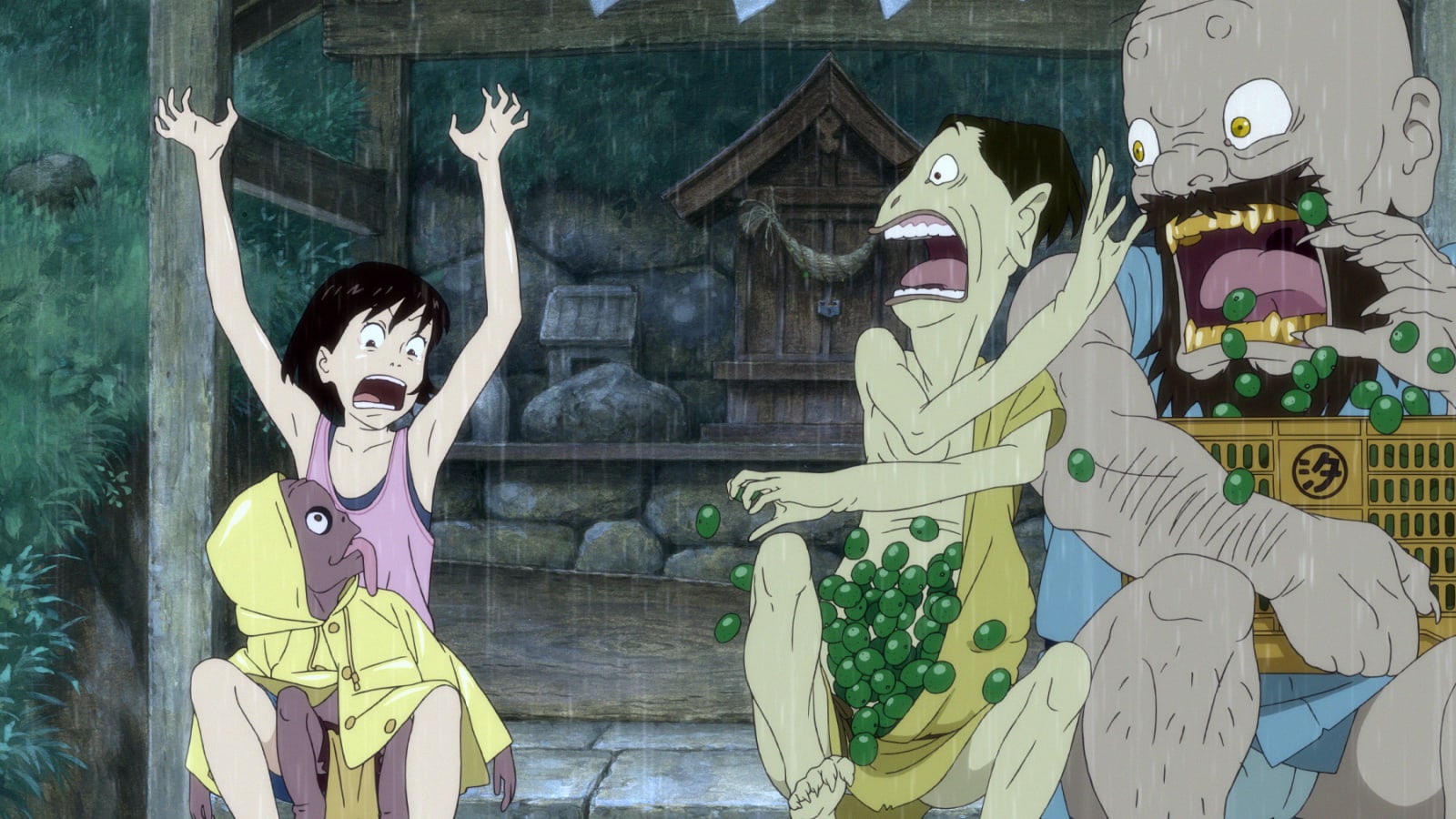 Although they’re yokai (goblins), the three that haunt 11-year-old Momo are so endearing she ends up becoming friends with them.

There’s their self-appointed leader, Iwa, whose gargantuan square jaw easily accommodates his permanently opened mouth showing off enormous gold teeth. Bearded and bug-eyed, his sumo stature would be terrifying if he weren’t such a doofus. Making up for Iwa’s klutziness is cunning Kawa, whose flatulence-wracked body is topped by a frog-like face. Finally, Mame, resembling a human baby, is downright adorable with black-ringed eyes and a hopeful grin—although his menacing tongue is as long as he’s tall.

Together the three mischievous imps attempt to perform their heavenly duty by helping Momo through grieving her father’s death. But they’re supposed to be invisible and when she’s able to see them, she justifiably freaks out.

After losing her researcher father to the sea, Momo (Japanese for peach; her given name is Miyaura) is traumatized by her last words to him. Because he couldn’t take time off from work to celebrate a special occasion, she hurled an ugly directive at him before stomping off. After he dies, she finds a letter addressed to her that contains only the greeting, “Dear Momo.” Interrupted as if he were in mid-thought, her father begins but never finishes the letter that consumes her. Haunted by both her last spoken words to him and his last written words to her, Momo reluctantly accompanies her heartbroken mother from bustling Tokyo to Shiojima, a small island in the Inland Sea.

As they settle into their old family house, Momo’s great aunt shows her a book about Japanese mythology printed during the Edo Period. Filled with illustrations of freakish beasts chasing and devouring humans, the book both frightens and fascinates her. Later, Momo’s great uncle reveals that his father collected images of the terrifying ogres and even confessed to seeing some, comforting words to Momo when she realizes she’s the only one who can interact with the three she’s encountered.

Meanwhile, Momo’s mother, Ikuko, is preoccupied with going back to school as a way to diffuse her pain. She’s even oblivious to Koichi, the mailman, who’s carried a torch for her since their childhoods. But when Ikuko sees a boy, Yota, who appears to be Momo’s age, she encourages them to make friends.

Seven long years in the making, this exquisitely hand drawn anime (A Letter to Momo) features backgrounds so detailed they could stand alone. From a Shinto shrine to a gliding ferry at the lapping shoreline, the intricate images are stunning—like the movement of water as children swim in it.

The narrative with its portrayal of idyllic life in a seaside village is exceptional. Every scene is rich with daily rituals; of kids diving off a bridge, men building straw boats for Obon (festival of the ancestors), and farmers harvesting their crops. For a film about supernatural beings, there’s an abundance of reality depicted throughout it via everyday routines. When Momo, lying on her back on the floor, thinks she hears something in the attic above her, she remains horizontal and simply pushes herself with her feet across the floor like kids often do.

And, the humor is sophisticated enough for adults—like Iwa telling Kawa he likes that “amphibian look you’re sporting these days.” Or, when Iwa and Kawa refuse to help Momo with something because it’s “against the rules,” but Mame naively offers his assistance because, he admits, “I don’t remember the rules.”

The audio has also been painstakingly added with minute information, like the sounds of a truck backing up in the distance, or the splashing of water, or the way a speaker’s voice fades as they walk away.

This is Okiura Hiroyuki’s second film as a director following 1998’s bloody Jin-Roh: The Wolf Brigade. He was also an animator for the violent Ghost in the Shell and Akira. But with its sweet pastel colors and gentle message of hope, Momo is a departure.

With richly drawn characters and a well-written story, it tackles the difficult subject of death with clarity and sensitivity. Accomplishing that through the characters of gruesome goblins, turning from fiends into friends because of a little girl, is especially charming.

A Letter to Momo starts Friday, September 5 at Varsity Theatre in Seattle for one week only. English-Dubbed and English-Subtitled versions. For more information, visit landmarktheatres.com.

Editor’s Note (9/11/2014 at 11:27 a.m.): A new version of this story has been uploaded that more closely resembles the writer’s original writing draft.