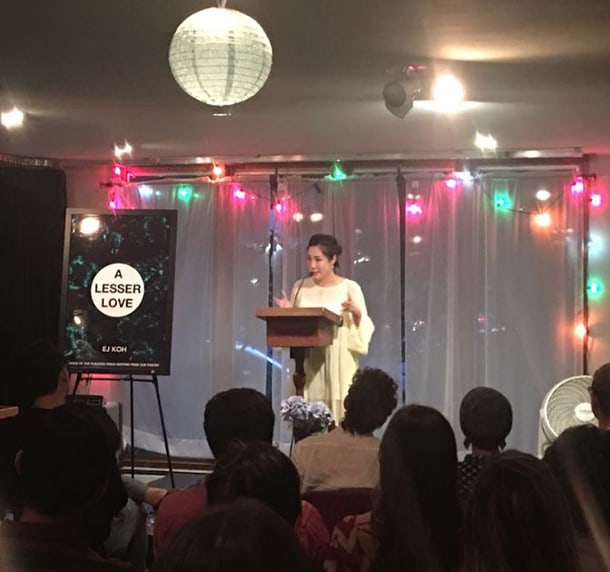 When I asked EJ Koh why she titled her debut poetry collection, A Lesser Love, she replied, “Lesser forms of love can still be considered as love.”

Koh’s statement best embodies her aesthetic of poetic magnanimity, which, through most of the collection, pulls the subject back from the picture, scene, or image to interrogate the object’s point of view. “Where’s the compassion here? ‘Cause there’s always room for it, and where can it go? Because otherwise, what is the reader gaining from reading that?”

This commitment to practicing compassion permeates Koh’s work, and gives it a unique texture. “Often today’s writers of color, especially women of color, are expected to produce and perform a very specific literary/narrative aesthetic, theme and trendy language to be consumable and/or palatable to white neoliberal consumers,” said Kelsey Lacanilao, programs assistant at Hugo House and organizer of Koh’s book launch on September 22. “There’s something about EJ’s poems that can be non-commodifiable, unreplicated.”

Paul Constant, co-founder of the Seattle Review of Books, says, “People think of literature as something stolid, sitting there on a page. But the truth is that literature is a conversation with everything that’s come before and everything that’s going on right now. EJ is now a leading voice in that conversation. I believe she’ll rise to that responsibility. I think she’ll be one of Seattle’s most important poets for many years.”

Featuring poems spanning roughly 2009 to the present, A Lesser Love follows Koh on a journey which began her last year of college. Growing up in the Bay Area, Koh said, “There were only two cultures: that was black and white, and we did not fit into white culture, because that was the mainstream, privileged culture, so the only other culture that we could fit ourselves into was black culture. So, we grew up breakdancing, listening to hip hop, loving R&B because we felt like we belonged as a minority. You kind of have to carve your own place as an Asian-American in this country.”

When she was 14, Koh’s parents moved to South Korea to work and support their two kids, leaving the young Kohs to find their own way through adulthood. From forging signatures to driving underage to being bullied and being a bully in high school in Nor Cal, Koh became a hip hop dancer who competed with dance crews in college, and very active in the party scene at UC Irvine. She didn’t write much, she says, but wrote down her dreams.

Koh registered for her first poetry class in her last year of college, and walked in covered in piercings, hip-hop garb, blasting music from her headphones, and submitting writings she’d made about her dreams. Her professor, reading through her work, encouraged the young misfit to keep writing down her dreams. “He saw the way that I was writing them, and he was seeing that I was healing from them and he said, ‘You need to sit down and write more poems. You need to write all of this down.’”

“In the pockets of my father’s work clothes, his hands / are mice running the wire wraps. But when I look at him, // from my periphery, I see the ghost in him strumming, preserved / In its brine. Tell me what you wanted.”
—Excerpt from “My Father the Musician”

“This was the one thing that was working,” Koh said. “When I wrote these poems then I felt better, I felt closer to being a good person than doing anything else. And that’s always been important to me since then. Having other things, other than poetry, to bring me back to myself.”

This healing continues for Koh, who learned from this professor to value magnanimity in her writing, in the full excavation of her past. And in the revisiting and rewriting of the moments she finds awful, she acknowledges responsibility in those situations while not relieving anyone else in the situation of their part in it. “And before I really didn’t want to do that, but now I see that I’m taking responsibility and power back and saying, ‘I am in control of my life. I am in control of the situations I find myself in. I’m still a human being and I know how to create my own fate,’” Koh said.

“How Fear Works” is a poem from one of those moments, where Koh feels she failed to find magnanimity. Written about an abusive relationship, it stands out in the collection as a piece that refuses to give any more than has already been taken. Even without finding magnanimity, however, the protagonist in “Fear” has control. Where “Fear” is like a knife in the collection, the sharpness is washed away by the river-like “Icicle Creek,” where Koh inverts a common poetic trope of a man leaving his wife and kids and, in long form, creates a modern-day fable.

“Icicle Creek” came about from Koh’s new-found love of hiking and climbing. Koh’s journey from Davis has taken her to New York, where she received her MFA in Creative Writing at Columbia University, and now to the University of Washington, where she is a PhD student in English Language and Literature. She is joyfully pursuing a new novel based on her grandmother’s life, as well as a memoir based on her adulthood in California, and translating letters her mother wrote her during that time.

“EJ’s work seems to take what it means to live as a child of a diaspora (which is to be wide-reaching, touching in many spaces/places/knowings, sometimes broken, made of parts, switching between entire dualities and those further between) and make it private, focused, intimate and whole in these poems.”
—Kelsey Lacanilao

Koh works closely with her father (a native Korean speaker) on translations, which she said, “forces him, a very staunch businessman, to read some poems with me.” That, however, is the extent to which her family is involved in her work. While she finds satisfaction in pressing poetry on those who she says look like they need poetry, Koh respects the tension between child-parent recollection.

“I don’t want to teach them or show them how to interact with my work,” Koh said. “I want them to come to it on their own terms. I want them to take their time with it because my work has a lot of things that a parent won’t want to read. It has a lot of things that a parent would want to forget. Wellbeing, for anyone, especially for my parents and family, and even for a community, that comes first, above any writing. It’s just poems. Read it if it helps you, and you love it and it’s good for you. But if it doesn’t? It’s okay. It’s okay. Although I’ll aggressively recommend it if I sense that, ooh, you need some poetry in your life!”

Paul Constant sees this as Koh’s best trait as a poet: “She’s emerged over the last two years as a significant Seattle talent, and I’m flabbergasted by the confidence she brings to her work. She writes and performs like a poet who is at the apex of her career, not just at the very beginning.

“I bet you’ll see a lot of younger or less established poets working in the spaces she’s opened up: family history, global history, translation. When you get a voice as confident as hers, and a book as good as A Lesser Love, you tend to see other poets look to her as an example—I’d expect to see her at a lot of group readings, for instance, and I expect to see other poets writing work inspired by hers.”

As a visiting instructor at Hugo House, Koh was able to pay forward the power of writing. One of her students was completely enlivened by the practice of writing, and wrote vivid stories about adventures she went on after being diagnosed with cancer; when she passed away, Koh and her students witnessed testimonials from this person’s family, who said they had no idea she wrote, but they did know it made her happy. It’s this self-sustaining and perpetuating gift, of loves multiplied, that Koh advocates and models in her collection, and which will undoubtedly shine through in her forthcoming work.

“When the people around you see that you’re healing or happy or growing, it affects them to do the same thing. It’s infectious. It really turned my head around. And continues to.”