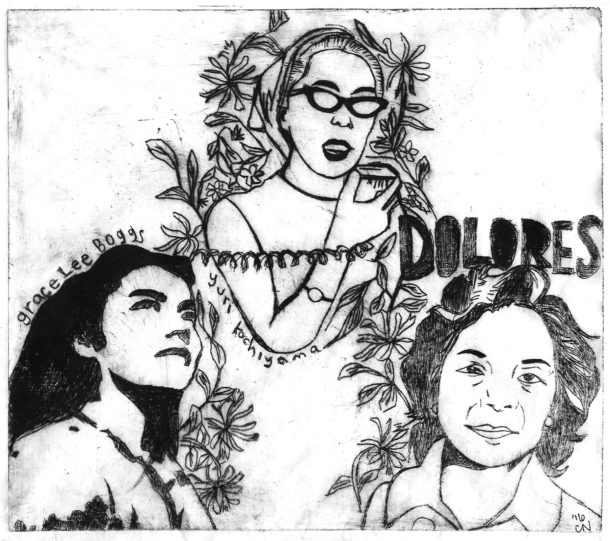 Our elders before us left their legacy for the world so that the next generation can pick up what they left off. Given the climate of the world we are in right now, we use our voices to lift up other voices that are rarely heard. Sometimes, we haven’t learned about the elders that have left a legacy before they passed away. I dedicate this artwork to Grace Lee Boggs, Yuri Kochiyama, and Dolores Huerta. A few of the many powerful women of color who remind us to go against the grain and raise our voices to advocate against social injustice. They remind us to stand up, speak, build solidarity, resist, and pave a way for the next generation to learn from.

“You cannot change any society unless you take responsibility for it, unless you see yourself as belonging to it and responsible for changing it. To make a revolution, people must not only struggle against institutions. They must make a philosophical/spiritual leap and become more ‘human’ human beings. In order to change/transform the world, they must change/transform themselves.”

Grace Lee Boggs was a community activist, writer, philosopher, and public speaker from Detroit. Boggs was a daughter of Chinese immigrants. Boggs’ legacy was establishing community organizations that created urban gardens throughout the city of Detroit, marching in the political movement against racism, and lecturing widely on human/ civil rights. She wrote books about her transforming vision of a revolution in America and published writings such as Revolution and Evolution in the Twentieth Century.

“Remember that consciousness is power. Consciousness is education and knowledge. Consciousness is becoming aware. It is the perfect vehicle for students. Consciousness-raising is pertinent for power, and be sure that power will not be abusively used, but used for building trust and goodwill domestically and internationally. Tomorrow’s world is yours to build. So, transform yourself first. … Because you are young and have dreams and want to do something meaningful, that in itself, makes you our future and our hope. Keep expanding your horizon, decolonize your mind, and cross borders.”

Yuri Kochiyama was an activist and freedom fighter. After the attack on Pearl Harbor, Kochiyama was forced to relocate to incarceration camps during World War II. After WWII, she and her husband Bill Kochiyama moved to New York where she got involved with the civil rights movement working alongside the Black Panther Party and Malcolm X—she was there by his side when he was shot and killed. Later, in the 1980s, she pushed for a public apology from the government during the Redress movement.

“The great social justice changes in our country have happened when people came together, organized, and took direct action. It is this right that sustains and nurtures our democracy today. The civil rights movement, the labor movement, the women’s movement, and the equality movement for our LGBTQ brothers and sisters are all manifestations of these rights.”

Dolores Huerta is a feminist, labor rights activist, and speaker. Huerta co-founded the United Farm Workers, which advocated for better working conditions for farm workers in California. She led the boycott against the grape industry for better working conditions and created the enactment of the Agricultural Labor Relations Act. The act helped grant better wages/ conditions and right to organize for farm workers. She worked alongside Cesar Chavez as the two worked closely to fight for liberation and the labor rights movement. Huerta later branched off to challenge the gender inequalities/discrimination in the farm workers movement.