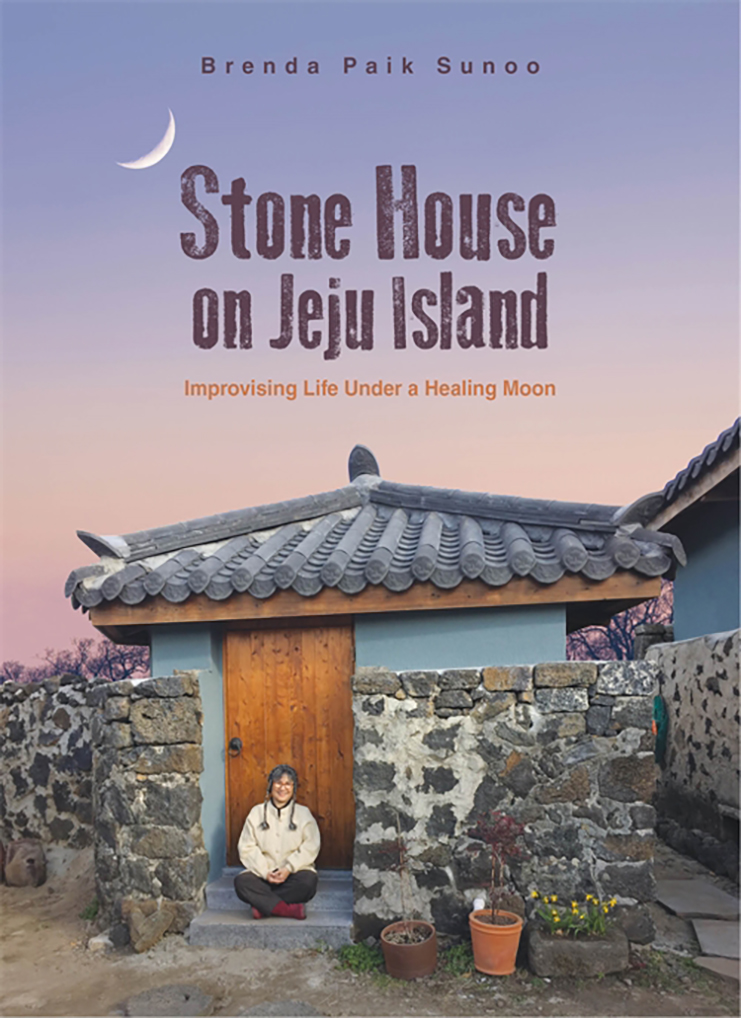 Seoul Selection is an independent publishing company that made its start as a small book cafe in 2002 across from Seoul’s iconic Gyeongbokgung Palace near Gwanghwamun Square, one of the major locations used to protest against then president Park Geun-hye in 2016. This part of Seoul is a magnet for tourists since the area carries a large bulk of the city’s cultural hotspots—the perfect setting for a business that caters to foreign visitors and the expat community.

Located in the basement of the Korean Publishers Association Building, Seoul Selection carries around 1,500 books related to Korean culture and history with translations in English, German, French, Japanese and Chinese. The store also has DVDs of Korean movies with English, Japanese and Chinese subtitles; traditional and contemporary CDs of Korean music; Korean folktales for children; and gift items. It is the first curated Korean bookstore for English books, and customers can even enjoy coffee made personally by the founder and owner Hyung-geun “Hank” Kim.

Kim first got his inspiration for the business while working as a journalist for Korea’s Yonhap News Agency. Three years before he opened Seoul Selection, he was reporting at the British Embassy and decided to ask diplomats if they had heard of “Shiri,” a major Hollywood-style action blockbuster that was the highest-grossing Korean film at the time. It starred a bevy of high-profile actors, one of them being Yun-jin Kim, best known to Americans for her role as Sun in J.J. Abrams’ “Lost.”

To his surprise, the diplomats were ignorant about the film, which was a mystery action thriller about North and South Korea. “It was very shocking,” he said in an article for ‘The Korea Herald,’ Seoul’s daily English language newspaper. “The film had already been watched by one-quarter of the whole population. The whole country was buzzing about it, yet these men had no idea.”

Kim had already wanted to help elevate Korea’s standing in the world through the dissemination of its culture back in 1995 when he was studying at American University in Washington, D.C., to get his master’s in communication. While he was there, he came to believe that attracting foreign investments was a way to promote peace and distill threats of war from North Korea. Those foreign investments would come, he believed, if people were more interested in Korea’s culture.

“I think that’s the most important thing in our generation to do,” he said in an interview early this year with Arirang TV’s Jennifer Clyde. “To make peace.”

After 14 years as a journalist, he quit and opened the bookstore. Since its humble beginnings, the book cafe, with the help and encouragement of its ardent fans and his persistence, has expanded to become a small company that not only publishes books but also offers design and translation services. SEOUL, its monthly lifestyle and travel magazine, has been jointly published with the Seoul Metropolitan Government since 2003 and has transitioned to an online format since 2018. Kim hopes to expand even further and start an English-language Internet radio station that discusses cultural issues and events all across Asia.

The following are two books that have been published through Seoul Selection. If these books sound interesting, check out its other books on www.seoulselection.com/usa/. 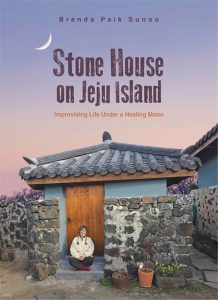 Jeju Island, a popular tourist destination located 40 miles south of Korea’s southernmost border, has the reputation of being Korea’s Hawaii. According to Post Magazine, 64,991 flights left for Jeju from Seoul in 2017, which averages to 178 flights per day. Although the island has always been a popular destination with Koreans, the past two decades have shown that it is also getting worldwide recognition. Its volcanic islands and lava tubes were chosen as UNESCO World Heritage Sites in 2007, and it became a UNESCO Global Geopark in 2015. The New7Wonders, an organization that tallies hundreds of millions of votes through its global voting platform, inaugurated the island as a New 7 Wonders of Nature in September 2012.

Ever since the ’80s, Brenda Paik Sunoo seemed to have some inkling of her future residence in Jeju Island. A third generation Korean American from Los Angeles, she first visited the island with her aunt and cousin in the ’80s. She was immediately struck by the ‘haenyeo,’ or ‘sea women’: female Korean free divers who scour the sea beds for clams, abalone, seaweed, sea urchin, octopus and other seafood. Thought of as Korean mermaids or the Amazons of Asia, they are able to hold their breath for two minutes, freediving a depth of 30 feet. What is remarkable is that these women continue making their living in this manner well into their eighties. They have been the breadwinners of their families and also fulfilled the roles of wife and mother.

After establishing a career as a journalist, Sunoo returned to Korea in 2007, determined to document the lives of these resilient women as the profession slowly becomes obsolete. According to the NYTimes, the number of ‘haenyeo’ had reduced to 4,500 in 2014 from 26,000 in the 1960s. Sunoo’s resulting book “Moon Tides: Jeju Island Grannies of the Sea” helped the ‘haenyeo’ be listed as one of UNESCO’s Intangible Cultural Heritage of Humanity in 2016.

After her research, Sunoo realized she wanted to live and retire in Jeju Island. Always on the lookout for land, she found a rundown house in Aewol Village, located in the northwestern part of the island, through the help of a friend. She and her husband decided to replace it with a traditional stone house using local labor and resources.

Stone House from Jeju Island is a collection of short essays that shows the joys, trials and tribulations of living in Jeju and building a house there. The book is divided into three parts: part one is the introduction to the island, part two delves into her and her husband’s decision to build a house, and part three revolves around their move to Aewol Village. Her essays are not just limited to the accounts of their stone house; rather, as stated in the title, her essays share her reflections over how the many aspects of Jeju Island, a place with its own history of tragedy and suffering, has helped her heal after the death of her youngest son in 1995.

“I have since navigated my healing journey not only inwardly, but outwardly toward places that bring us comfort and joy,” she writes in the preface. “…I feel most at home in this compact island because it has suffered and endured. It mirrors my inner landscape…My essays herein hopefully offer a glimpse of what I’ve learned in the course of engaging the landscape, history, and people around me.” 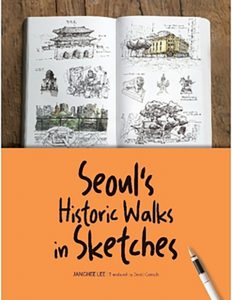 For people who are interested in a guidebook of Seoul that looks beyond the mere description of what one can see, do or buy in a given area, look no further than this illustrated compendium which will have readers feeling as if they were getting a personalized guided city tour in real time. The precision and fine detail of the sketches depicting neighborhoods, cityscapes and buildings will imbue a feeling of intimacy as they read about the history of these places in relation to other sights in the area.

This translated work was published from the original in 2018, seven years after its Korean publication. Illustrator Janghee Lee is a columnist and a contributor to several local newspapers and magazines and started sketching Seoul out of a desire to learn more deeply about it. In a city that is reputed to have the fastest Internet in the world, Seoul is constantly evolving as its infrastructure changes with the addition of new buildings and roads that seem to crop up every few months. In the preface to his book, he noted that Seoul is not considered to be a historical city—one of the factors that motivated him to “track down the old stories hidden by the new buildings.”

Lee is particularly concerned about the lack of importance people place on the preservation of old buildings. South Korea has rapidly developed since the Korean War, leaving many culturally significant buildings vulnerable to destruction as the country tried to shed its poverty-stricken image and become a new and modern place. “A lot of people need to know these places exist,” he said in an article in SEOUL magazine. “When people know those places exist, it’s difficult to knock them down.”

Chock full of detailed information, charming sketches and tales from the past, this book will particularly delight people who appreciate art and want a more intimate look at Seoul. Lee not only examines well-known tourist sites but back roads and neighborhoods that aren’t trumpeted by mainstream media. As someone who had lived in Seoul for almost three years, I was delighted to revisit familiar areas and to learn new things I had never been aware of. I was also deeply interested in learning about the history behind various artwork, buildings, public spaces and institutions such as the Paichai School, which was started by an American Methodist missionary, or Pyeonghwa Market, where a young worker set himself on fire on a bridge to protest the poor working conditions for laborers. Fans of Korea, or even people who are curious about it, will find this book to be an informative feast for the eyes.