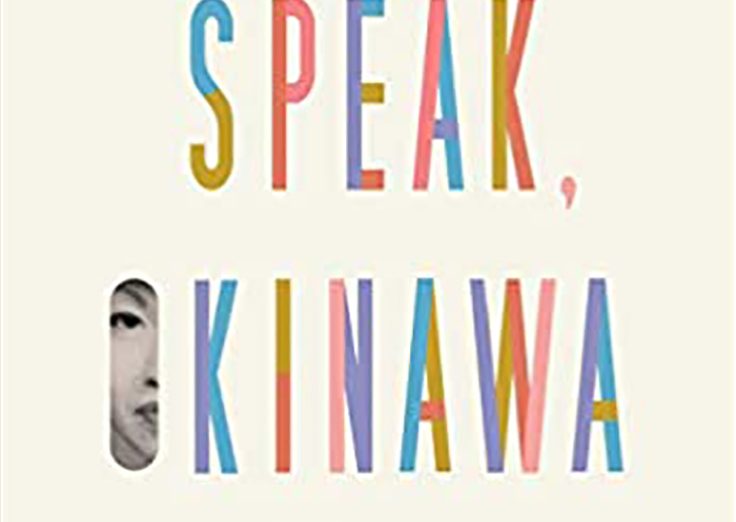 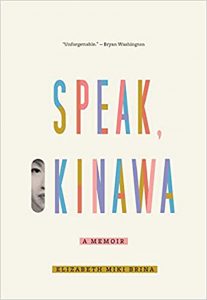 I’m struggling to write this review.

Prior to February 2021, if you searched Amazon for books on “Okinawa,” you’d face a deluge of titles related to World War II: Bloody Okinawa, Crucible of Hell, Descent into Hell, The Ultimate Battle. As I write this, however, the first book one sees is Speak, Okinawa, a new memoir from Elizabeth Miki Brina.

Despite a number of glowing blurbs from established memoir writers and positive reviews from literary publications, the first Amazon reviews dismiss the book, accusing “this one half person” who “does not speak for the overall experience of being mixed,” of “over-exaggeration” filled with “straight-up lies,” with “absolute zero understanding of reality, society and international affairs,…matters…too complex for her to grasp.” Spat out in one-star tantrums, these insults signal some of the difficulty in coming to speak about our diasporic identities as mixed, Uchinanchu (Okinawan) women living in the United States. This is especially true for those born to U.S. servicemen and Uchinanchu women.

A just memory constantly tries to recall what might be forgotten, accidentally or deliberately, through self-serving interests, the debilitating effects of trauma, or the distraction offered by excessively remembering something else, such as the heroism of the nation’s soldiers. –Viet Nguyen

Prior to the late 19th century, Okinawa did not exist. It was one island among the Ryukyu Islands, which were, for the most part, their own sovereign entity. But in 1879, Meiji Japan removed the Ryukyu king by force, seized full political control, and “annexed” the island chain, as part of its early imperial positioning towards Asia and the Pacific.

After World War II, Japan ceded presumably, temporary control of the island to the United States, where the empire built up military bases as part of its imperial expansion into Asia and the Pacific. In 1972, the year of my birth, the United States formally “returned” Okinawa but its bases remained, still occupying 20% of the island to this day. As I write this, a multi-year battle over the development of a new base in Oura Bay, rages on, as Uchinanchu elders, many of them survivors of the bloody Battle of Okinawa, have led the fight to halt construction.

Even as I want to scream and swear at the reviewers on Amazon, I understand the discourse framing Okinawa. This history is complicated. After all, roughly 20,000 U.S. soldiers and 100,000 Japanese soldiers died in the Battle of Okinawa, including middle school aged Uchinanchu girls and boys conscripted by the imperial military. But 100,000 civilians also died — one third of the island’s entire population.

And in the years immediately after, Uchinanchus were held in detention camps while the U.S. military built up their newly acquired property in the ways it needed. Okinawan life around the bases proceeded — that is, Uchinanchus struggled to make new lives, both protesting the U.S. military bases and eeking out a living based on their inhabitants.

As is the case for Elizabeth Miki Brina.

Brina’s memoir, Speak, Okinawa, reflects on the evolution of her identity as a daughter of a retired, white U.S. military officer and an Uchinanchu woman born into the Okinawan working-class a few years after the Battle of Okinawa. Similar to many “mixed-race” memoirs, the book traces an emotional terrain of growing up both female and “half” Okinawan and “half” white in a predominantly white and patriarchal setting, as Brina contends with all the ways racism and sexism (both external and internalized) held her back from realizing what and who she wanted to be.

But Speak, Okinawa differs in that the chapters sharing the author’s individual memories and reflections are interspersed with those narrating key historical events of Japanese and U.S. (mis)treatment of the island and its people.

Echoing Julie Otsuka’s Buddha in the Attic, Brina’s use of a poetic “we” creates a collective Uchinanchu perspective across time. We become immersed in the experience of Okinawa as a dual colony and understand Brina’s memories exist in that diasporic context. And as we do, we see and feel the way trauma crosses generations. As Brina explains early in the book:

These memories are impossible to forget, regardless of whether we actually lived through them. I believe they stay in our bodies. As sickness, as addiction, as poor posture or a tendency toward apology, as a deepened capacity for sadness or anger. As determination to survive, a relentless tempered optimism. I believe they are inherited, passed on to us like brown eyes or the shape of a nose.

The pain and determination and inheritance become evident throughout the book, as we start to see through Brina’s relationship with each of her parents — who at times, become metaphors for the United States and Okinawa themselves.

“So much more [to Brina] than his bigotry,” Brina’s father is a committed parent, a consistently reliable patriarch Brina can count on whenever she is feeling vulnerable. Less consistent is Brina’s mother, who struggles with inherited trauma, homesickness and alcoholism, all of which alienates her from her daughter. As an adult, Brina owns her part in her mother’s alienation even as none of it is fundamentally her fault. But it’s also clear that Brina wholly admires her mother’s persistence and celebrates her ability to make community with women like herself.

As Shimabuku says, there’s a certain “unintelligibility” to Okinawan life — especially lives like Brina’s and her mother’s, whose experiences are so intimately tied to the historical circumstances of dueling imperialisms and imperialist collusions. Even though my family left Okinawa to hoe hana on cane plantations in Hawai’i over a hundred years ago, most of us still identify as Uchinanchu, and proudly. But that doesn’t mean we know our history.

But claiming Uchinanchu memory just might mean we can know each other. Or begin to hear the sound of our voices, emerging as we speak. Intelligibly.