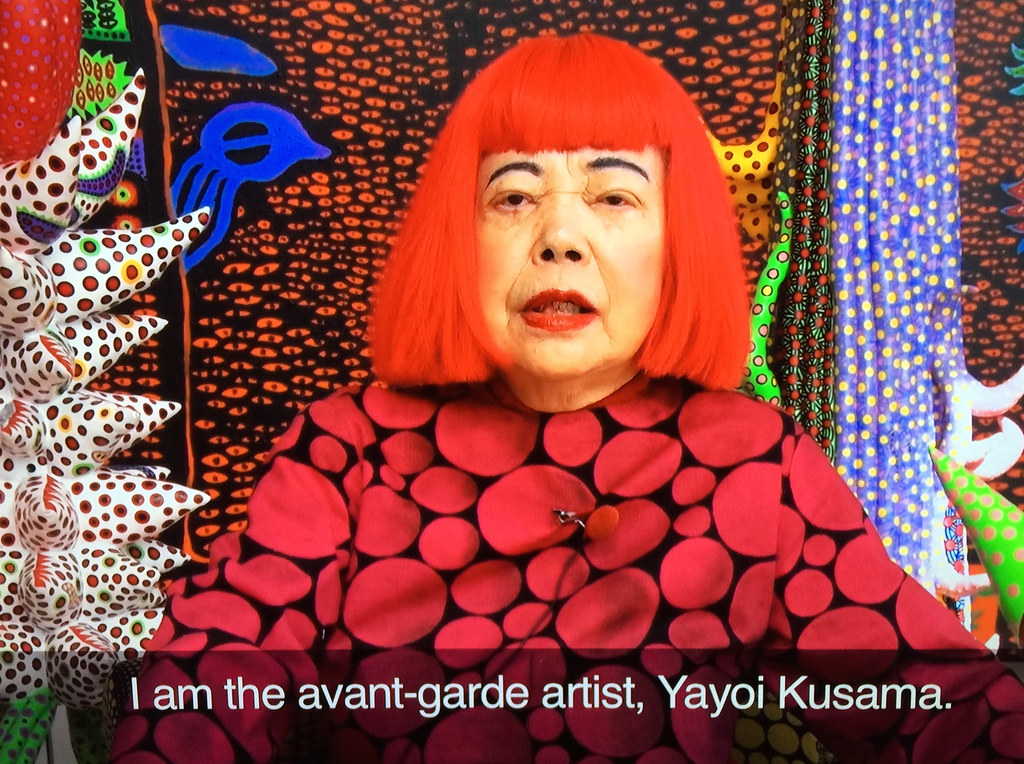 Polka dot majesty, that’s one way to describe Yayoi Kusama. She is an indefatigable bewitched queen of the global art world. Still active at 88 years old, since her youth, she has created myth and miracle out of herself to build a singular artistic career. She began to paint in Matsumoto, Japan in the 1950s, and came to Seattle in 1957 where she had her first U.S. show at Zoe Dusanne Gallery. Local artists in the gallery such as Paul Horiuchi and George Tsutakawa urged her to go to New York if she wanted to make it internationally. In New York she gradually became a prominent avant-garde performance artist. She was a young woman and a minority in the city at a time (from the end of 1950s to 1970s) when male artists dominated almost all emerging new art movements. Her originality has evolved from her ability to cope with her at times severe mental condition. With her keen awareness of the emerging new art movements and connectivity with fellow artists, she could turn her handicaps into a fierce creative energy that transformed obstacles into artistic solutions. In a literal sense, there is no other way to express it, she is truly one of a kind. Prominent individuals noticed her uniqueness and talents, and opened doors for her. She received numerous awards, and her recognition was validated by a highly prestigious award, The Order of Culture by the Government of Japan in 2016.

In a recent video interview displayed in Yayoi Kusama: Infinity Mirrors (at Seattle Art Museum from July 2 to September 10), Kasuma, radiantly dressed in a red wig and dress, confronts the viewer with a penetrating gaze and talks about her hope for young people to harness all their energy to fight like her for love and peace in the world.  At the entrance, many happy, bright colored, large paintings hang on the wall to welcome all visitors. “Love Myself (2010)” radiates a joyous pink and blue resembling Matisse but harbors a kick of contemporary uneasiness. One sees an endless number of eyes swarming like a school of small fish on these canvases. The recognition of her work came with her shows in New York and Washington, D.C. galleries consisting of a series of “Net” paintings filled with small dots on huge canvases, some as large as ten meters in width. For this, she painted nonstop for 50 to 60 hours. She wrote in her autobiography that this was her way to forget about hunger in a chillingly cold New York studio. Others explain it as a condition propelled by the compulsive nature of her mental condition. A smaller oil painting, “Plate 29 (1961)” in the show demonstrates her dexterity as the diverse shape of each dot beautifully captures the inner landscape of a troubled mind. She was about 10 years old when she first began to see the hallucination of these dots.

From the early 1960s on, buoyed by her will to conquer the New York art scene, she began soft sculpture. She sewed an endless number of stuffed forms out of fabric by hand, and attached them on furniture.  She filled these creatures of growth on a boat in the gallery in 1963-64, covered whole walls with photo reproductions of them, and called it “Aggregation: Thousand Boats Show.” Here in this exhibition, there is a solitary silver-painted boat with a rich wealth of abundant growth on its surface featuring grapes and leaves that almost seem to symbolize the harvest of life.  The artist herself and most publications discuss those protruding forms as a multiplication of the phallic form, which in Japanese folk life translates as “the god of fertility.” Although she steered clear of politics, the image of a provoking sexuality came from her “happening” events, which she orchestrated in public performances with nude, young participants at prominent places like the Brooklyn Bridge from late 1960s to early 1970s. One of the soft sculptures on the wall, “Plate 44, Ennui (1976)” looks as if it were filled with diverse shapes of a silver larvae. Elegant yet abundant squirming forms hint at the eerie persuasion of her dark novels and poetry published after she moved back to Japan in 1973, and permanently settled in at a psychiatric hospital in Tokyo in 1977.

At the entrance to the show is an acrylic painting, “My Heart Soaring in the Sunset (2013).” In it, chains of small circular faces on a yellow snake moving across a bright orange background seem to brim over with the exhilarating laughter of children. According to the informative catalog, one of the participatory virtual reality installations, “Aftermath of Obliteration of Eternity (2009)” recalls the more than 10,000 floating lanterns for the Hiroshima Peace Memorial Ceremony on August 6 every year (p. 31). One feels this journey of lost souls as they drift, hoping for some fulfillment of peace. The show traces her courageous creative journey and invites the visitors along into another world to share her dreams and wishes.

Her success story is not simply based on sensationalism or popularity alone. For this particular traveling exhibition, the shows have sold out before the opening dates, and images of visitors in her virtual reality installations have been circulating everywhere. In one interview, Kusama makes it abundantly clear that the writings and artistic creativity are one single journey for her.  And, indeed, her singularity of purposeful pursuit breaks open the limitations many of us face in our normal lives.  Her journey has been one of heavenly highs and torturous lows but somewhere in-between she has achieved a phenomenal freedom.

Even though the initial tickets for the show are sold out, Seattle Art Museum will issue a limited number of tickets for the day of the show only although it’s recommended you line up early for the best shot at them. They will be sold on a first-come, first served basis. Hours have been added for this show to accommodate as many visitors as possible. SAM will be open on Mondays until 5pm. On Fridays, the museum will be open until 9pm. The museum will also be open on Labor Day, September 4. For up-to-the-minute details about tickets, go to this link: http://kusama.site.seattleartmuseum.org/plan-your-visit/#tix.

The show was organized by Hirshhorn Museum and Sculpture Garden in Washington DC (Feb.23-May 14, 2017) and after Seattle Art Museum, the show will travel to the Broad, Los Angeles (Oct. 21-Jan. 10, 2018), Art Gallery of Ontario, Toronto (March 3-May 27, 2018), and High Museum of Art, Atlanta (Nov. 2018-Feb. 2019). There will be related activities lead by local artists, including Junko Yamamoto on Sundays, and related films will be shown on July 12th. Please check for details at seattleartmuseum.org.