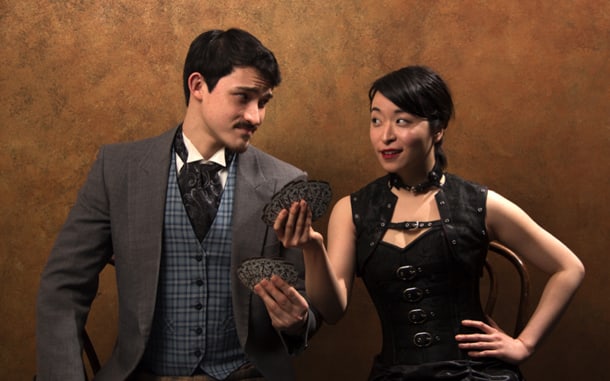 What could transform a frivolous, fun loving young woman into a terrifying underground crime boss? Local playwright Maggie Lee answers with her newest steampunk noir play, A Hand of Talons opening on April 29 at Theatre Off Jackson. Described by producers at Pork Filled Productions (PFP) as “The Godfather meets Jules Verne,” it chronicles the rise to power of its central character: Wilhelmina Yao, the leader of the Yao family clan.

Lee penned two other PFP plays, produced to great acclaim—The Clockwork Professor and The Tumbleweed Zephyr—both set in New Providence, a fictional steampunk universe. Steampunk is a genre of fiction where Victorian era inspired aesthetics and technology whimsically collide with science fiction possibilities. A Hand of Talons, while in the same world, is a darker departure from the other two plays into the underbelly of New Providence, creating a new type of subgenre: steampunk noir. Audiences can expect a thrilling steampunk adventure combined with a darker mood and style associated with film noir—exploring the deep inner psychology of its characters.

Talons, a card game invented by Lee, is a leading theme in A Hand of Talons. The main character, Wilhelmina is mentioned with fear in a previous play, but is never seen. As an audience, we will meet an ordinary young woman who hardens to become a “relentless, vicious, and unyielding” leader. Wilhelmina’s hunger for power mirrors the imagery of predatory sharp claws grabbing its prey. Lee also alluded that talons represent the power of family in keeping its members dangerously close and never letting go. The stakes of game are high—complete control of a criminal empire, which Wilhelmina stops at nothing to grasp. A Hand of Talons also features lots of cool parts for women who lead the Yao matriarchal criminal clan.

“We are at Theatre Off Jackson, and it’s sort of an underground location. The play is set in an underground gambling club. We’re really trying to use the theatre’s natural environment to help enhance the experience of the play.” Previous PFP shows are renowned for executing visually exquisite sets, costumes, and props—and they promise the same excellence in A Hand of Talons. “We have really cool designers to help build the world. So it’s not just about watching a play, but we hope the audience feels like they are in New Providence,” Lee notes. The location of the theatre, in the International District neighborhood, also indirectly adds to the immersive experience with its own rich underground history.

A Hand of Talons and other PFP shows give talented Asian American and Pacific Islander actors the opportunity to showcase their talent in fantastical genre theatre that they might not otherwise have. Lee, who is also a producer of PFP, added, “We don’t want to make a big deal out of it, but it is a big deal. We want to change how people look at casting and actors and how they are represented. We can’t just confine it to ‘oh it’s an Asian play, so we need Asian actors for the Asian play. We need to cast people in shows that are about everybody. What’s great about science fiction and creating your own universe is that we throw all the rules out the window as far as race is concerned, people can be anything.”

Lee has always had an interest writing, especially science fiction and horror. She has written plays since 2005, when she met Roger Tang—of Pork Filled Players, an Asian American sketch group—who invited her to write sketch comedy. Before writing plays, she was a lighting designer. Her design background gives her writing a unique technical edge—she is able to see a play’s action and transitions clearly in her mind’s eye before it’s on the page. She’s worn many hats in theatre since, in addition to writing—including acting—and built strong, meaningful relationships within the theatre community over the years.

“Working in theatre and being a lighting designer also helped me as a human being. To be organized, communicative, working for the whole. And having fun with life,” Lee says.

One of her favorite parts of working in theatre is the exciting collaboration between artists. “Being a playwright is so weird because you’re by yourself just crafting this thing. And then you have to be okay with letting go of ownership. But it’s great also, because stuff happens that you didn’t know could happen.” And given the success of her past collaborations, A Hand of Talons is poised to grip audiences with its thrilling story, talented acting, and beautiful visuals.

Catch ‘A Hand of Talons’ by Maggie Lee, directed by Amy Poisson, at Theatre Off Jackson  from April 29 to May 21, 2016. Appropriate for teens and up. Buy tickets at Brown Paper Tickets: http://www.brownpapertickets.com/event/2490244.