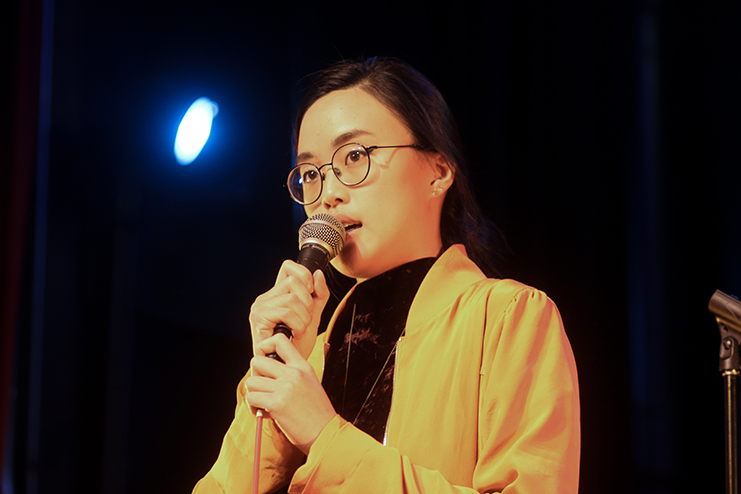 Asian Americans have long faced the myth of the “model minority,” a set of stereotypes suggesting that Asian Americans achieve universal high socioeconomic success. This myth is not only inaccurate, but is also used to downplay the effects of racism for all non-white ethnic groups in the United States.

Here in Seattle, a group of women comedy performers takes aims at this myth in Model Minority: An Asian Womxn Comedy Show. On January 30, host Dewa Dorje served as emcee for five comics including Ellen Acuario, Stephanie Nam, Umi On, Bernice Ye, and Cindy Su. And the show sold out, but good news — there will be another one on Saturday, April 25.

Show creator Stephanie Nam aims to create a space where Asian Americans can take comfort in being not the minority, but instead the majority. “In everyday life, I feel so weird, alienated, and othered and am often told that I am weird and awkward,” Nam said. “I feel like I need to constantly pretend to be someone else in order to fit in.”

Nam aims to create a milieu in which these masks can be dropped. “As someone with several marginalized and underrepresented and invisibilized identities, I often have to explain my perspective much more than your average cisgendered heterosexual white man, but when there is a space created that centers those marginalized identities, there is a natural understanding,” she said. “I have been in different spaces that center POC, LGBTQIA+ people, womxn, and Asians and find that they are so different from being in a general heteronormative space where whiteness is the norm.”

That’s why Nam feels comedy is the ideal genre for creating this safety. “Whether something is funny or not is relative,” she said. “That’s why I can tell a joke in one space and get no reaction and tell the same joke in another space and get a thunderous one.”

Model Minority is intended to provide a realm where the challenges of Asian American life can be placed front and center. “I can tell stories of being Asian and being in America to a crowd that can understand and relate instantly, where I am sharing rather than explaining,” Nam said.

Comedian Cindy Su also expects that participating in Model Minority will help her become more comfortable with herself. “I definitely do fall into the stereotypes in some ways but in other ways am very much opposite of what people expect me to be,” Su said. “When I was growing up, it was not as acceptable to be different and I was never encouraged to explore my creative and artistic ambitions.”

Similarly, comic Umi Om was never encouraged to use her voice. “Within South Indian culture, especially, a quiet woman is a good woman,” Om said. “Comedy is pushing me to use my voice in a way that I haven’t always been comfortable in doing so.”

When this gets tough, Om practices courage. “I go out to mics every week and stick my ovaries forward, remembering that most of us are given the gift of a voice we can share,” she said. “By building a community of people who have the same values and who face similar challenges that I face, I know that my skits are for them too.”

That makes Model Minority an ideal venue for Om. “South Indian people are often confused with indigenous ‘Indian’ people, the clothing, the fact that people don’t believe I am South Indian due to my fair skin.,” Om said. “To be around other people who are in the othered group brings a sense of connection.”

Comedian Ellen Acuario concurs. “I think most of us that are categorized in the model minority hate it because it’s such a false narrative,” Acuario said. “It’s great to be able to address the ridiculousness of it as a comedian and actually thrive on being able to debunk it.”

That’s why Acuario finds that comedy helps her to recharge. “As a mom, I’m trying to always stay afloat managing my family with two little boys who always have me on my toes,” she said. “After putting them to bed, it’s hard to push myself to start another part of the day where I have to come alive on a stage to make strangers laugh when I’m ready to enter a vegetative state.”

But she finds that bringing her whole self to the live comedy stage suits her best.  “In the comedy itself, I think it’s such a fine line being funny and one’s authentic self,” she said. “I don’t know that I have any other method but to just suffer through it in the writing process and hope I found that silver line to connect with the audience in a real way that also makes them laugh.”

But Nam fights these temptations by trusting in the response of the audience. “I don’t want to water down my perspective to a point where I can be universally liked and understood and also forgettable,” she said. “I want to maintain my own unique perspective and view and be confident in knowing that there is an audience out there for me even if I don’t see them at the average comedy club.”

To this audience, Nam said she had planned to talk about her identity and experiences. “I talk about being confused for other Asians who look nothing like me by people who should definitely know me,” she said. “I also talk about things that fall outside of being Asian. As it is also an all-womxn show, I talk about feminism and consent and the absurdity of some things that men have told me and unlearning all the harmful things I have learned growing up as a girl in this country.”

In other words, this comedy show takes aim at all things serious.