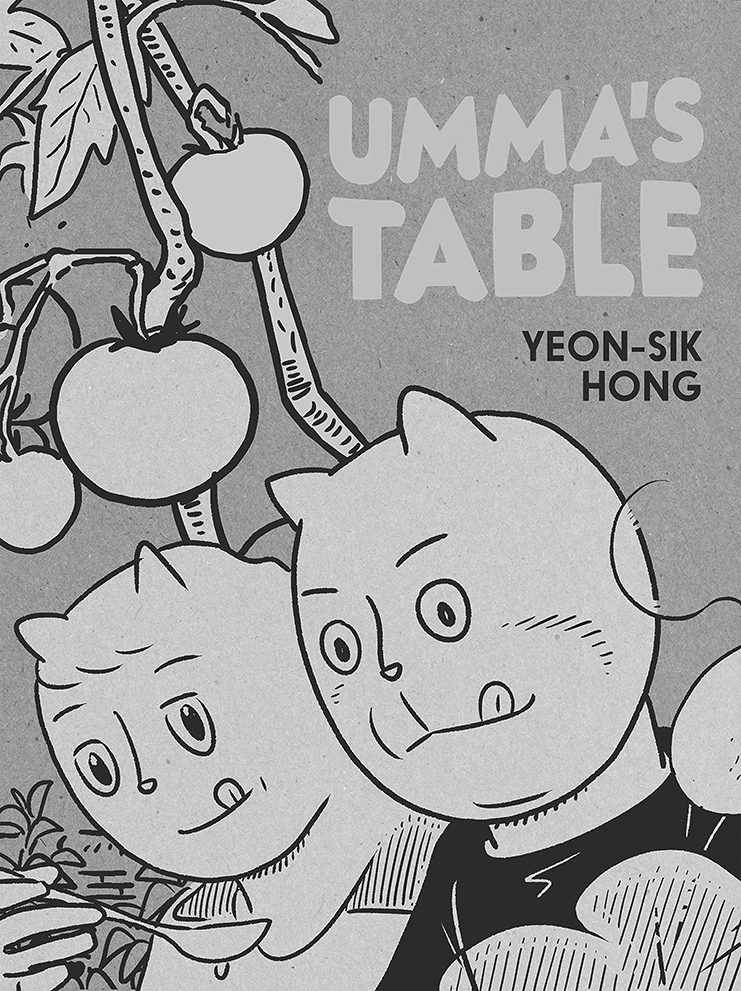 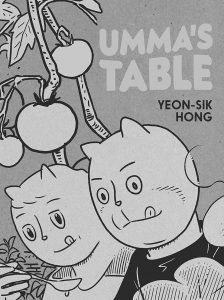 “How did mom cook up all those dishes from her tiny kitchen? For so many years? Umma’s table was bigger than the kitchen itself.”

Come, let us gather around Umma’s table in this graphic novel. Let your eyes feast on the assortment of homemade side dishes as you smell the aroma of the hot, steaming soybean paste stew fill the house. Taste the delicious mix of flavors of the freshly made kimchi, sliced just moments before being served. Filled with images of delicious traditional Korean meals, Umma’s Table tells a heartfelt story of a family man who juggles the dual role of being both a father and an adult son.

As the main character, Madang copes with his parents’ declining health as he reminisces about his childhood days where his Umma (mother) cooked delicious food that made his mouth water and heart sing with glee. Madang also recreates some of Umma’s meals as he prepares food for his own child. Through the intricate drawings and use of words like “tsss tsss” and “burble burble,” Yeon-Sik Hong brings to life not only the characters, but also the various Korean dishes that Madang and Umma prepare. Through the illustrations, it almost feels like the reader can smell and taste the food that is jumping out of the pages.

Interwoven with the joyous memories of Umma’s delicious meals are the daily complexities and hardships of life. Madang’s parents live in a dark, tiny basement rental in the city because they cannot afford to live anywhere else. Furthermore, both are suffering from health complications, with Umma relying on more medications than one can count. As a son, Madang has the responsibility of taking his parents to get their regular health check-ups and carries the burden of covering for their medical bills. Parallel to his responsibility as a son, Madang also carries the responsibility of caring for his wife and newborn son.

This dual role makes him feel like he is constantly traveling between an old world that he wishes to leave behind, and a new world which he desires to protect. Umma’s Table shows the delicate balance between living your own life as an independent adult child and also the responsibilities that come with being a good son, father, and husband.

Madang tries to maintain this balance by separating his two worlds, and fears that the old world he tried so hard to escape would contaminate his new world that he created in a quiet countryside outside the bustling city. Mixed with his desire to separate his two worlds are his resentment toward his alcoholic father, along with the exhaustion of caring for his aging parents, and also the feelings of fear, pain, and regret as he sees Umma’s health continue to deteriorate. The emotions in this graphic novel are well-portrayed, allowing readers to witness the feelings of shock, joy, worry, anger, and pain that Madang and his family experiences.

While the novel has various themes and lessons, Umma’s Table is ultimately a story about family. Food is central to family life, and the meals represent not only one’s culture, but also the love poured out by the individual who carefully prepared each dish.

As a Korean American, this novel made me think of the delicious meals my own Umma and Halmuni (grandmother) cooked for me whenever I came home. I’ve heard a saying that Asian parents tell their children “I love you” by asking, “Have you eaten?” Through the portrayal of meals, this graphic novel masterfully displays the love and deep connection that runs between a mother and her adult son.