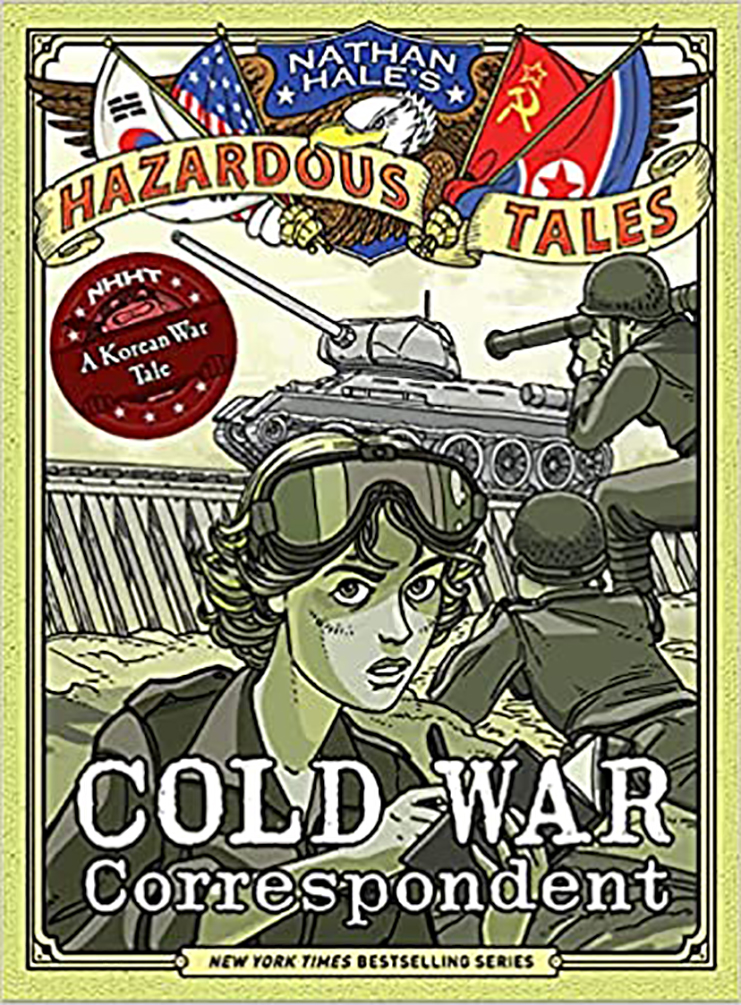 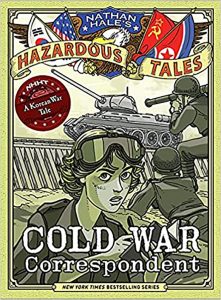 Cold War Correspondent: A Korean War Tale tells of Marguerite Higgins’ experiences as the only woman reporting from the battlefields during the first months of the Korean War in 1950. This eleventh and most recent installment of cartoonist Nathan Hale’s graphic novel series “Nathan Hale’s Hazardous Tales” might inspire young readers to become spunky news reporters. Its military adventure stories seem just as likely to stir their dreams of becoming a combat soldier who risks a “heroic death” in the name of defending democracy.

Cold War Correspondent makes a serious effort to convey a reliable history of the Korean conflict, and directly warns the reader that labeling North Korea as “bad” and South Korea as “good” would be “a gross oversimplification.” It mostly steers clear of heavy-handed propagandizing. Nevertheless, the book does almost nothing to complicate the Cold War perspective it presents: that the Korean War had been a “proxy war,” a contest between the forces of “freedom,” represented by the United States, and the aggressive forces of “Communism,” represented by the Soviet Union.

Hale’s graphic novel succeeds especially well at putting the reader into the action, with long and thrilling, well-composed and well-paced battle scenes that go on for pages. For example, we see what “Maggie” Higgins experienced day by day in July, 1950 near Taejon (Daejon), South Korea. We identify immediately with the American soldiers whose ineffective howitzers and bazooka rocket launchers are no more effectual than snowballs in slowing down the invading T-34 tanks. The story hammers home the importance of having superior military technology over and over. (The U.S. learned that lesson very well, but then went on to be defeated again and again by adversaries with inferior military technology in the decades since then.)

As with many histories of the first months of the Korean War, it all quickly starts to seem like an exciting game, played on fields measured in miles instead of yards, where casualties are tallied like points.  We “lose” men, 20 or 30 or 90 at a time; we “take out” 300 or 400 or 600 of theirs.

Meanwhile, in nearby Taejon (now transliterated as Daejon) that same July, the South Korean police were massacring prisoners by the thousands. Fearing that some South Koreans would help the invading army, the South Korean authorities arrested leftist sympathizers and then executed an estimated 60,000 to 200,000 of them. This nation-wide, South Korean war crime was not reported in American newspapers at the time and remained a taboo subject for decades afterward. It gets no mention in this graphic novel. (In Higgins’ 1951 book War in Korea, she admits briefly that South Korea’s police were “brutal in the extreme.”)

The final score, presented in a box on page 126, reports that in three years of the Korean War, “36,574 Americans died in hostile actions; […] South Korea lost 162,394 soldiers; The other U.N. countries lost 4,544; an estimated 2-3 million North and South Korean civilians were killed.” (In this book’s version of the conflict, China barely gets listed as a participant because it entered the war after Higgins had left. China’s losses in the Korean War have been estimated as from 180,000 to 900,000 soldiers. This summary also fails to include the many deaths of North Korean soldiers.) In other words, American soldiers accounted for about 1% of the deaths in the Korean War, much smaller than the rounding error in the number of civilian deaths in that war. Although not unusual (U.S. military deaths were less than 1% of the total dead in World War I and World War II), the number deserves emphasis because the American-centric focus of American popular culture generally leaves a misleading impression that drastically understates the full “costs” of war.

Much of the continuing interest in Marguerite Higgins focuses on her pioneering role in overcoming sexist resistance to her work as a war correspondent. The graphic novel emphasizes this in several places. In this story, sexism exclusively takes the form of quickly-overturned, discriminatory decisions by men in authority. The soldiers’ wolf-whistling, the many vicious rumors that dogged her, and the belittling gossip columns that praised this “cute, little” (30-year-old) “gal reporter” make no appearance, leaving the readers’ attention where Higgins would have wanted it: on her professional competence.

Like any good educational comic, Cold War Correspondent has a page listing its sources. This one incorporates some characters who jokingly explain that for this project, they had to pay $150 to a rare book dealer for a copy of Higgins’ autobiography News is a Singular Thing. (Its current price on ebay is $469.) Perhaps they did not try The Internet Archive (archive.org), where that book had been uploaded in 2010 and can still be read for free.

In that autobiography, Higgins says something about the death of her prematurely-born daughter, Sharon Lee, in 1953 which was not included in Cold War Correspondent:

“In Korea I was there on a muddy hillside as the first American gave his life […] And yet, as Sharon died, I made the discovery that I had seen death, yet I had not known it. Certainly I had been sorry for the thousands I had seen dead and dying – so sadly, wearingly many thousands. But sorry in a detached sort of way. I did not fully comprehend the tears of the bereaved. I had not known how the death of another could be infinitely more wounding than the prospect of your own death. I had not known many things. For I had not known the meaning of compassion.”

Cold War Correspondent concludes by having the character representing Higgins say that “war stories don’t just belong to one person. I saw the war through a reporter’s eyes. A soldier, civilian, or refugee might see it differently. The more perspectives you get, the better you can understand a war.” True.

By focusing at length on what one ambitious, muddy, lipstick-wearing reporter saw in the beginning months of the Korean War, this graphic novel succeeds in telling a clear and absorbing story. At various points, though, we get small reminders of the suffering that this approach leaves out. For example, “napalm” gets defined in child-friendly terms as “gasoline in gel form. It sticks to things and burns at a few thousand degrees.” It might have seemed intrusive in the context of this basically upbeat story to add that the tens of thousands of tons of napalm that the U.S. used in the Korean War were intentionally dropped, not just on “things,” but also on people.

The Korean War has been in the news again lately as South Korea’s President Moon Jae-In seeks a formal declaration to end the war. North Korea has refused to participate until the United States shows that it has ended its “hostile policy.” For example, North Korea interprets the annual military “war games” (that are advertised as shows of force to deter the North from attacking the South again) as rehearsals for a military overthrow of their own government, and also demands an end to the economy-crushing “sanctions” which the US has imposed on it, in various forms, continuously since June 28, 1950. In reply, a United States State Department spokesperson insists that “We certainly have no hostile intent towards [North Korea],” and American news media repeat this vacuous statement without critical comment.

Compared to a typical American war comic, Cold War Correspondent takes greater account of the Koreans who experienced the Korean War, but that did not take much. It includes a drawing of the South Korean Army leading the way in the fight from Inchon to Seoul. It includes a real-life Korean news correspondent from the Korean War, Bill Shinn. It also reels off some of the high points of Korean culture (“Korea is credited with the first astronomical tower”; “The first usage of movable metal type”; “Korea built the first successful ironclad warships.”) Cold War Correspondent leaves out, though, the tragic heartbreak of those many Koreans whose families were permanently and painfully sliced in two as a consequence of the U.S. drawing a line to keep Soviet influence and dictatorship confined to the top half of the Korean peninsula.

Perhaps the saddest thing about this well-made graphic novel concerns the way that its detached, uncomprehending depictions of death seem so utterly ordinary in popular culture. True stories have the potential to build empathy and could even add a sense of urgency to the problem of how to end the Korean War. Those are different stories than the true story told in Cold War Correspondent.

It is available online through the Seattle Public Library’s subscription to the Hoopla Digital Comics collection 2021.