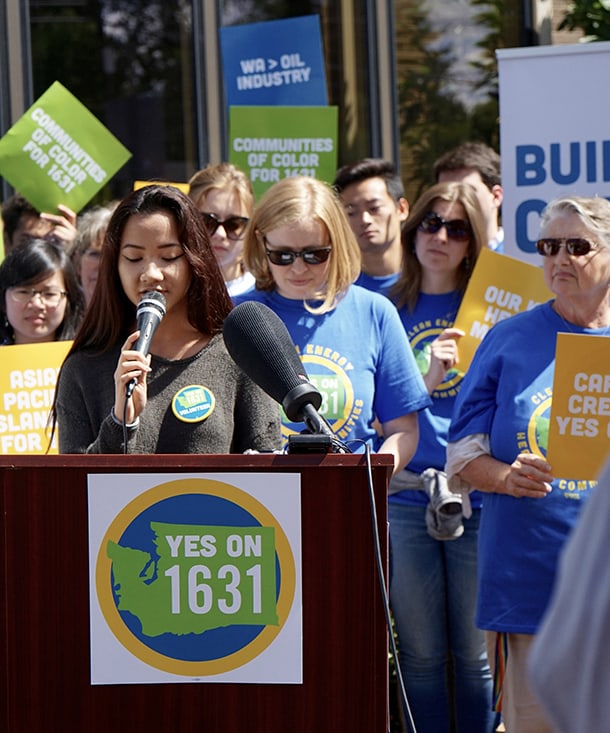 I’ve lived in Washington for the past 15 years after I moved from Jakarta, Indonesia, when I was four. Ever since I became a U.S. citizen, I’ve had the privilege to go back every so often and experience two very different homes; two sides of a coin demonstrates what happens when we do not prioritize our health and our environment.

Indonesia is a beautiful country. White and pink sands line the coastline, filled with a diverse abundance of species – illuminated by a seemingly endless summer. Unfortunately, all of this beauty has been overshadowed by a lack of foresight, planning, and the growing devastation of pollution.

There are roughly 15 million motorcycles, paired with 5.2 million cars in just the city of Jakarta. This has resulted in intense smog, higher rates of asthma, bronchitis, lung cancer and cardiovascular disease. Last year, Jakarta was listed as one of the top five cities with the worst air quality index

Growing up in Seattle, it’s clear we’ve built an effort to protect the place we all share. We, as Washington residents, are lucky to live in a place that prioritizes quality of life.

Over the past three months I’ve worked to gather signatures to get a new statewide initiative, I-1631, on the 2018 ballot in November. Its mission is to take the first step towards tackling pollution and transitioning our communities to clean energy and cleaner air. It would put a fee on the largest polluters in the state like the oil industry, and use the money raised in large part to invest in those communities most affected by pollution like those in Central and South Seattle and tribal nations across our state.

Before this I had never canvassed or gathered signatures. I always thought of political work like this as outside of my scope, something awkward and impossible to bring up in any normal conversation. Just the thought of signature gathering itself made me feel very uncomfortable!

On my very first day of signature gathering, the universe had planned for Seattle to rain buckets; about four hours straight during the 2018 March for Science. Despite the ironic turn of events, this experience has allowed me to meet a lot of interesting individuals – some who I had long, deep discussions with. From these conversations, I learned that regardless of their different backgrounds and beliefs, the discussions always reached a mutual understanding through the same set of fundamental beliefs.

In order to get there, we must move past our superficial differences and work towards these goals together. I may not be good at gathering signatures. But, I wholeheartedly believe that Initiative 1631 will help Washington, and that is enough for me to surpass my comfort zone, and ultimately work get this initiative on the ballot.

I’ve had the unique experience to see what happens when a community ignores the impacts of pollution. It in many ways has overshadowed the beauty in Indonesia. But here in Washington, we have an opportunity to build the clean future we want. We can clean our air, protect our health, and work to undo the disparities we see every day between our communities.

That’s what I-1631 does and that’s why I hope you’ll join me in fighting for it.

Learn more at yeson1631.org. Jade Lauw is a senior at the University of Washington. She is an intern for Washington Physicians for Social Responsibility and is a fellow for the youth-led organization, Our Climate.