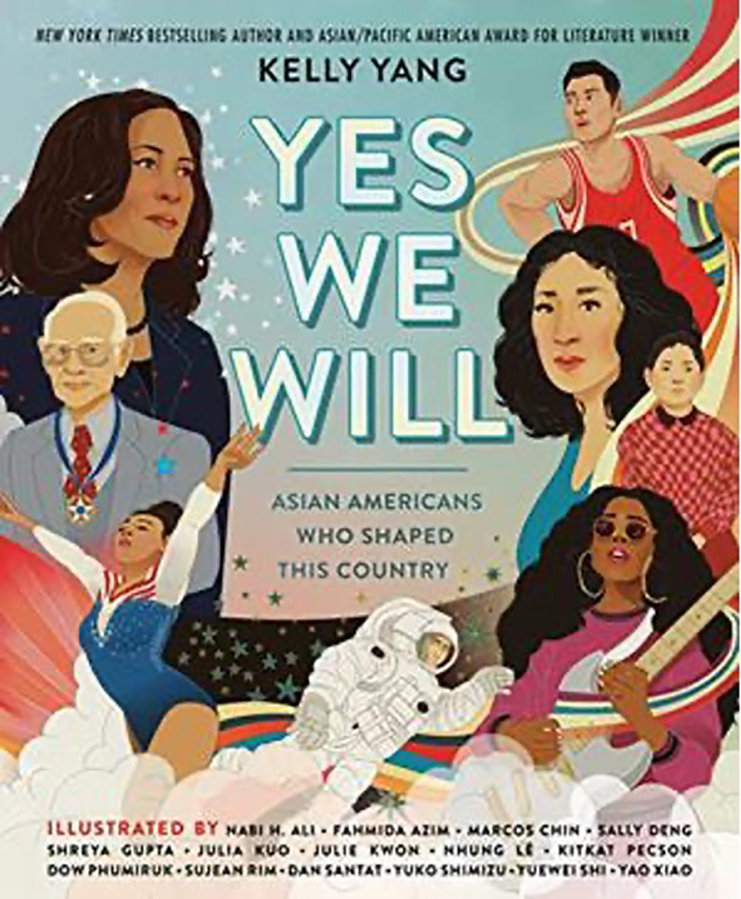 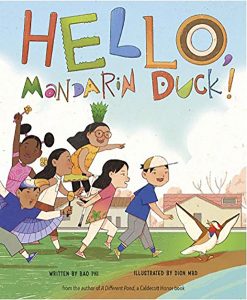 This is a fun book about a Mandarin duck who flies to a new place and seems to be lost. At first, the duck waddles around not knowing where it is going. Kids admire the duck as it shuffles along the sidewalk. The children in the neighborhood are curious about this colorful duck. How did it get here? Where will it end up? With the help of youngsters, the duck finds a new home at a nearby pond. They all call to the duck and since the neighborhood has people from many different countries and places in the United States, they share the many languages they know welcoming the duck to the neighborhood.

The book is about accepting new creatures to the community and the warmth that comes with that acceptance. It’s a fantastic story about linguistic diversity and finding one’s place in a community. The illustrations show the excitement of the children as they talk with and follow the duck. The artist shows many people, young and old, from the diverse neighborhood. The artist also has drawn a beautiful and colorful Mandarin duck.

They all call out hello to the duck in their home languages such as:

and many more greetings. 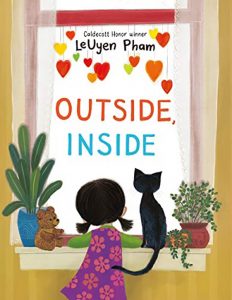 This is a story about the pandemic when everyone was first outside and then they all went inside. Pham explains that this happened throughout the world. People went inside and “shut their doors, and waited.”

Some people were outside because we needed them. They were first responders, nurses, doctors, police officers, and grocery workers who wore masks. They had to go outside to work and help us. Few people walked outside or drove their cars. Most folks stayed in and read, played games, and worked on their computers. Parks were vacant. Neighborhoods were empty. Students did not go to school. Staying inside was hard. Sometimes, “we cried, “and other times “We hoped and prayed and wished.” However, inside we kept growing and so did the outside. The birds kept flying and trees got taller. We had to stay inside because of the pandemic, and “it was the right thing to do.” One of the lessons we hoped we learned during this time is, “On the Outside, we are all different. But on the inside, we are all the same.” We were looking forward to being together again Inside and Outside.

The drawings are exceptional. Pham has created people who look like the ethnic diversity we see in our country using bold colors and beautiful sketches of many different individuals. Her artwork is fun and engaging. She shows diverse neighborhoods of single-family homes, brownstones, and tall apartments. The drawings tell the story of how we were alone, but hopeful and then we came back together. A great book that can be used to talk about the pandemic. 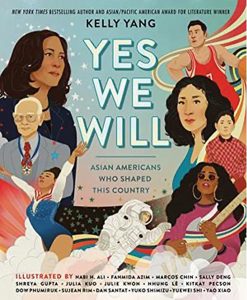 Yes We Will: Asian Americans Who Shaped This Country

This picture book provides readers with the fantastic contributions of many Asian Americans to our nation. Yang starts with over 20,000 Chinese American immigrants who built much of the Transcontinental Railroad. In addition, Yang tells us that many AAPIS were told they could not stay in the United States, but they said they would fight exclusion laws like the Chinese Exclusion Law of 1882.

“We’ll soar to high heights,” Yang wrote about the basketball skills of Jeremy Lin, a Chinese American, or fight for the rights of farmworkers like Philip Vera Cruz, a Filipino American. There are many more individuals highlighted in the book like Vice President Kamala Harris, a South Asian American and African American, and Senator Tammy Duckworth, a Thai American. Can you name at least five famous Asian Americans? If not, this book will help you. 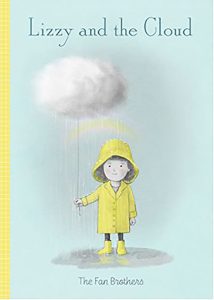 Lizzy and the Cloud

Have you ever thought of having your own cloud? A cloud that you would take everywhere you went? Lizzy picked her very own cloud and “named her cloud Milo.” “Lizzy carefully watered Milo each day.” Sometimes in the house, Milo would water Lizzie’s special plants like her orchids and ferns. Milo liked it when the weather was rainy, but as he grew Milo got so large that he covered Lizzy’s entire ceiling in her room. Lizzie knew soon she would have to let him go. One day, she opened the window and he floated up to the sky and was gone.

Sometimes Lizzy would try to find Milo high up in the air among the clouds. Just in case, “if she ever spotted a particularly fluffy cloud, she would wave.” Lizzy was sad that Milo was gone, but she knew that it was best to let him go.

Initially, the book shows Lizzy in her bright yellow raincoat, hat, and galoshes holding a soft, fluffy small cloud. As Milo gets larger the illustrations become more muted with many shades of greys showing how her cloud lived in an apartment with Lizzy. Later as Milo floats away, the illustrations show pale grey and white clouds high in the sky. 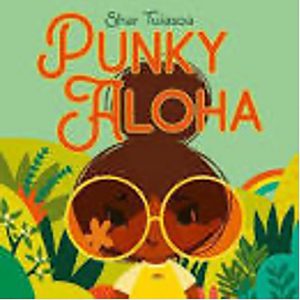 A really fun story about a young girl from an island community who has the Aloha spirit. Punky lives in an island community and is friendly to everyone. Punky’s grandmother wants to make her the best banana bread, but she is out of butter. She sends Punky out to get her butter. Punky is a little scared, but she puts on Grandmother’s big yellow brave glasses to give her courage. Her Grandmother reminds her to “Be helpful. Be giving. Be brave. This is how we share our Aloha.” Punky helps a mother pig who needs her assistance and the mother gives her a beautiful lei. Next, Punky helps a bee who did not collect much pollen so Punky gave her the lei. The bee gives her pollen in return. “Fresh, gooey honey. My favorite!” says Punky.

As she continues on her adventure, Punky rides her skateboard and crashes into Kimo. They both tumble to the ground. The two help each other up and Punky puts honey on Kim’s scraped knee. He feels much better. Punky gets butter from Kimo’s dad and Kimo becomes her new friend. This story is about how Punky becomes brave and spunky!

The illustrations show a lively Punky who grows from being quiet and shy to a hero. She becomes someone who loves adventures. Her bright yellow glasses give her energy and spunk.