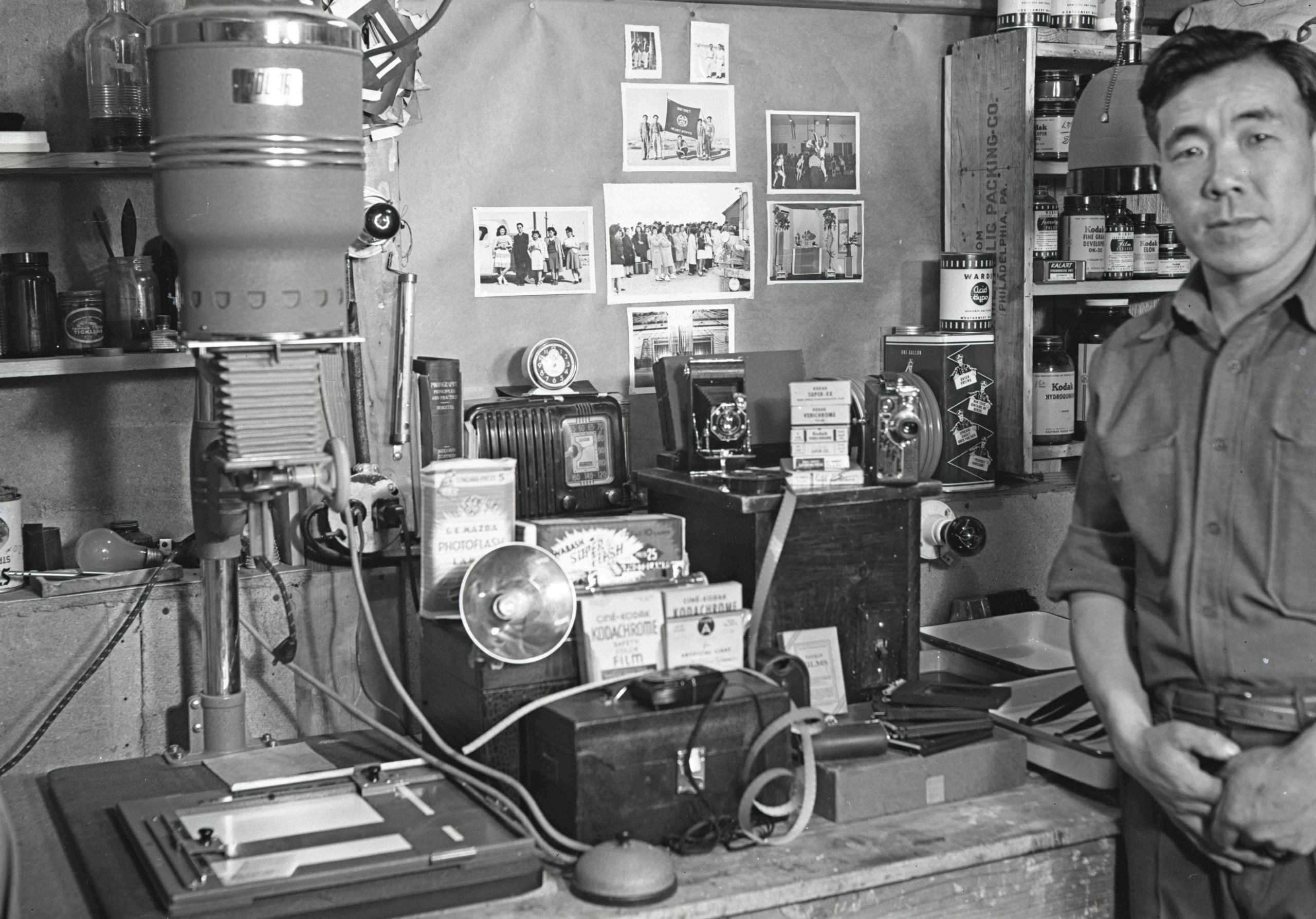 Even in dismal times, the world is always a little bigger than you think. For instance, at the Heart Mountain concentration camp, once upon a time, in barracks apartment 15-9-A, there was a little trap door in the floor. Beneath it was the secret darkroom of father-and-son community photographers George and Frank Hirahara, whose vast collection is one of the treasures of Japanese American history.

After Frank’s death in 2006, his daughter, Patti Hirahara, realized that her family’s archive was too important not to share. In addition to thousands of photos from World War II incarceration and postwar resettlement in Portland, she found directories and other records of the prewar Japanese American community in the Yakima Valley. Japanese-language materials like these typically didn’t survive the war.

Due to Patti’s efforts, her family’s story now features in Hidden History of Yakima, a new book by Ellen Allmendinger, and an award-winning exhibition at the Yakima Valley Museum that celebrated its eighth anniversary this October. She’s established Hirahara Family Collections at WSU, her father’s alma mater, the Oregon Nikkei Legacy Center (viewable through Densho), and her hometown, the City of Anaheim, where Frank worked as an aerospace engineer. Two family artifacts are also in the collection of the Smithsonian.

This year, Patti received the WSU Honorary Alumna Award—the first Japanese American recipient in 52 years—and was named Grand Marshal of the Washington State Pioneer Power Show, an honor given to her grandfather 31 years earlier. I met her for coffee when she was in Seattle for a family visit.

What kind of person builds a darkroom in a concentration camp? I wondered if these qualities might run in a family. You’d have to be industrious: George’s parents, Motokichi and Sato, were truck farmers, and George and his wife, Koto, ran the Pacific Hotel. You’d have to be fortunate: Motokichi arrived in Tacoma in 1907, just before the Gentlemen’s Agreement restricted laborers coming to the US, and brought Sato and little George three years later. After an arranged marriage, Koto arrived in 1924, just before a new law shut down immigration entirely.

You’d have to be resourceful. At Heart Mountain, George had a car he’d acquired while picking sugar beets in Oregon with other incarcerees, and shipped in a refrigerator to store film. You’d have to be charming, too. Patti suspects that camp officials turned a blind eye to the darkroom, and that her family managed to win over the camp director, Guy Robertson. It was Robertson who announced in the Heart Mountain Sentinel that rules against owning cameras only applied to non-citizens. (Even so, the Japan-born George would have been ineligible.)

Patti Hirahara has all these qualities. A former Miss Suburban Optimist/Orange County Nisei Queen and successful TV game show contestant, she earned a BA from Cal State-Fullerton and had careers as a print and broadcast journalist, PR counsel, marketing consultant, product development specialist, and business owner.

We met at a favorite pie shop in South Seattle—one of those throwback places where the baker, owner and counter server are all the same guy, a local institution since forever. He opens when he opens, so the place was still dark when we arrived. After chatting for a few minutes, I went to peek around—still nothing, so I decided to give up and head elsewhere.

I didn’t really understand the Hiraharas yet. Back in the car, Patti was just getting off the phone with the baker. He’ll be up in a minute, she told me.

Maybe the Hirahara family secret is just persistence? Patti has made it her personal mission to identify every person in the camp photos. So far, through internet sleuthing and cryptic notes on the negative envelopes, she’s figured out about 70 percent of the individuals—group photos are a little harder.

Generally the families have no idea that the pictures existed. Sometimes she learns that someone’s photo is the last one ever taken. In one case, a son was headed to prison, after his father convinced him to oppose the draft. After he got out, he died of an incurable disease. His siblings hadn’t wanted to dress up for that photo, but years later, they were glad to have it.

The pie was delicious.

Working with people in the community has made this the most fantastic year of my life, Patti tells me. She’s proud of her SoCal hometown, but also proud to represent her family’s eight decades of history in the Yakima Valley, and to share it with non-Japanese Americans too. Where does this drive come from?

On 9/11, she was flying through D.C. on a red-eye with her husband, she tells me. They were waiting for a connection when the first plane hit the towers. Her husband saw the second plane hit in the snack bar. Patti remembers seeing a stampede coming her way, her husband in the middle, and then they were all in scissor cars to the main terminal. Someone said someone had a gun.

An ATF agent told them to get the hell out of town and not look back, but it took three days to get a rental car. She’ll never forget the fear in people’s eyes. Now she understood what WWII was like. She thinks of this today, as people’s rights are being challenged. “All we can do is support each other,” she says.

The resort where they’d booked a package vacation threatened to keep the deposit, but Patti called a VP and got their money back.

A photographer herself, Patti is the third generation of Hiraharas with the camera bug. Every picture has to tell a story, her father always said. He meant that she needed to respect the composition, to realize that the camera’s eye isn’t neutral, that it can hide as well as tell, that it can tell less or more than you intended.

There are no photographs of the darkroom at Heart Mountain, just a close-up of her grandfather with some equipment. It’s a good set-up, Patti can see, better than the camp newspaper’s. Beyond that, she’s had to rely on the memories of a few confidants George allowed inside. The rest, you have to imagine. What child never dreamed of a trap door, and on the other side, untold treasures?