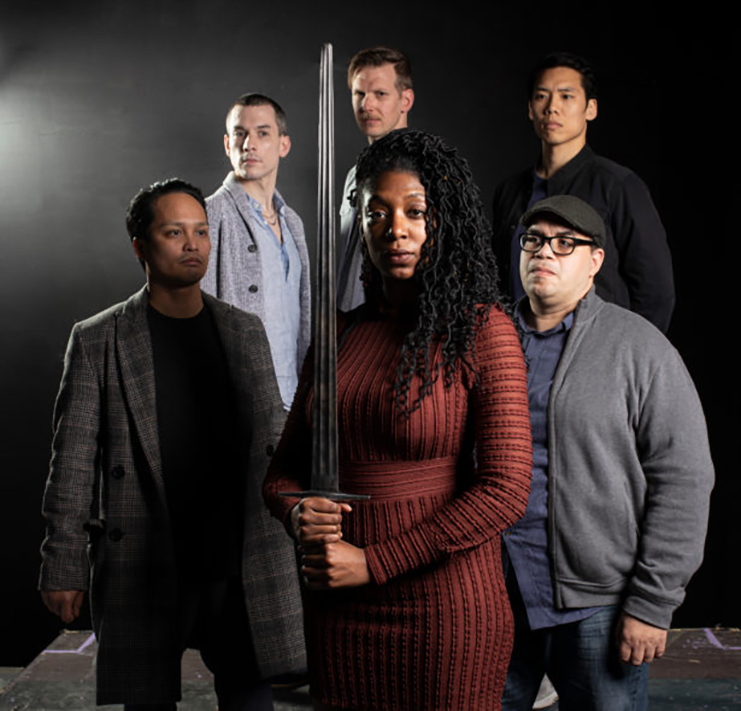 Saint Joan was scheduled to run March 12 to April 5 at ArtsWest but has been postponed to July 9, 2020. Arts West will be working over the next few weeks to determine if they can offer Saint Joan later in their season schedule. They request that ticket holders to please continue to look for emails from them about this update.

In the current political climate, there has been much talk and action around resistance.  And now, local theatre company ArtsWest presents a story of one of the most well-known resisters in Western culture:  Joan of Arc.

The inclusion of Saint Joan in the ArtsWest season immediately caught Magin’s eye. “I did a cold read of the script seven years ago and fell in love with the language and the humor,” she said. “I asked Mat if I could be a part of the production as a dramaturg, an adapter, or an assistant director and he invited me to be all three!”

Magin got started on making Shaw’s flowery language more accessible for a contemporary audience.  “This is less of an ‘adaption’ in the usual sense and more of a ‘reduction,’” she said. “I kept all the of the action, and I trimmed the script down to be sleek, to be clear, and to drive the actions and themes of the play.”

But Magin also kept her focus on the broader team assembled by director Wright.  “I also adapted this script to be a playground for diverse actors to just be actors, an important mission for me as an Asian American theatre maker,” Magin said. “While I think it is important to share cultural stories, I think it is equally important to share stories where POC characters are just normal people in the world.”

Two of the other team members are actors Lee Yang and Jose Abaoag III.  Both play multiple roles in this adaptation aimed at efficiency of words, actions, and space.

Yang’s primary role is that of Dunois, a military commander at the Siege of Orlean. “He is described as brave, handsome, and darling of all the ladies, but throughout the play Dunois is mostly concerned with battles and the lives of his men, including Joan,” Yang says. “What I find interesting about Dunois is that underneath his practical and logical military persona lies a sensitive romantic.”

Meanwhile, on the opposite side of the battlefield, Abaoag’s main character is The Earl of Warwick. “He is a cunning member of the English nobility who places his faith, privilege, and rhetorical talents into his battlefield of choice: political manipulation,” said Abaoag.

Both actors were strongly attracted to performing with ArtsWest. Yang originally came to work in theatre with an education in artificial intelligence and is performing at ArtsWest for the first time. “Because I don’t have a traditional background in theatre, I always get some loose sense of imposter syndrome,” he said. “But everyone has been so supportive that I feel safe to explore and try new things, and make plenty of mistakes.”

Abaoag re-enters the world of acting after two years away and is particularly inspired by the theme of Saint Joan. “I am always interested in Rebels that go against an Established Order or the Status Quo,” Abaoag said. “They have all the odds against them and no guarantees that they will prevail but they have faith and change things anyway.”

Variety was also a key draw. “I was also interested in playing a member of the Nobility and of the Patriarchy because I don’t often get to play an English Lord of Privilege and Power,” Abaoag said.  “But ArtsWest Theatre has a proven track record of casting People of Color and not making their racial backgrounds a focal point. They let the actors and theatre-makers of color be themselves, which is to say artists who bring their whole selves and perspective to telling the story.”

And that story, for Abaoag, is a continuous line from the past to the present. “After studying the history of the French versus English in the time of Joan of Arc’s rise,” he said, “it is both fascinating and troubling because even though feudalism no longer exists in that form, not has much changed in the justifications and tactics that men of power and wealth deploy to silence, dismiss, and destroy threats to their control, especially if that threat is from a woman and a person of integrity and authenticity. That is Joan.”

Magin concurs that ArtsWest is aiming to explore the universal aspects of politics and power structures. “Often times when Saint Joan is being produced, the producers frame the story of Joan in a way they think audiences can better relate to it. They might set it is the McCarthy era or in the world of finance,” she said. “We have chosen to build our own world to tell Saint Joan in. It is minimalist, chic, and timeless.”

Placing the setting in the background allows the team to foreground the commonalities among systems of oppression. “This play is about how when there is a lack of diversity, in this case gender diversity, systems that should work for the people suffer,” Magin said. “When people get caught up in ‘how it should be done,’ and deny their conscience, humanity and commonsense, systems that are meant to help do the opposite.”

Despite common knowledge of the outcome of Joan of Arc’s resistance, the ArtsWest team still finds the journey inspiring. “Her authenticity is infectious and pure and these Insiders with something to lose fight with righteous zeal to ensure that this Outsider is discredited so as not to disrupt the law and order they have constructed,” Abaoag said. “She is the ultimate disrupter and rebel and change maker.”