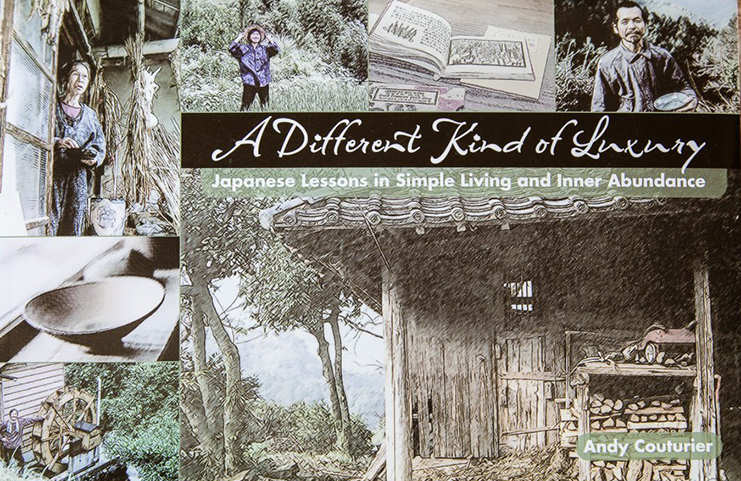 In today’s modern Japan, the image of living a contemplative, slow, and self-sustaining simple life in remote parts of the Japanese countryside only exists in the movies. Or does it? Andy Couturier, writer and journalist, has profiled 11 individuals who have chosen lives contrary to the norm in Japan, and have taken on ordinary lives in exceptional ways in A Different Kind of Luxury.

Some of these individuals had either established or promising careers, and yet they turned away from societal expectations of career and life paths, giving up financial security for the intangible riches and freedom found in a simple way of living. This life choice is not a fad for them, but a refined life honed from experience and reflection, sustained with an unswerving dedication to simplicity.

All have found refuge in the countryside and in the old ways of doing things – places and methods abandoned by those who have migrated to the modern metropolitan centers of Japan. Atsuko Watanabe lives in a simple farmhouse and raises two children with her husband. Koichi Yamashita farms rice using old methods, rejecting modern government-suggested guidelines, and without chemicals or poisons. Two of the potters persist in using wood kilns, rather than the tamer gas-fired ones.

Yet these are not mere country peasants. Each proves to be reflective and each is high-achieving in their chosen endeavors. It is no accident that nearly all of them are artists, and unconventional ones who have avoided the trappings of traditional, static Japanese art. Among them are potters, painters, writers, a fabric artist, hand book makers and even a film maker. The connection of contemplation and art is best summed up by Osamu Nakamura – “A craftsperson’s job is half meditation, half creation. It takes creativity to design whatever you are working on, but it takes meditation to do it right.”

In spite of their geographic isolation, all are connected to their immediate community and for some, a much wider community. Some share their passion by being environmentalists, political and anti-nuclear activists, or by just being teachers and artists.

As unique as each is, there are common threads in their journeys and in finding a life more akin to an older Japan, but surprisingly, not in Japan. Almost all travelled abroad and discovered or learned some lesson from the people they met. Traveling to India, Nepal, Tibet and Afghanistan, some discovered an older and more meaningful kind of Buddhism, or discovered connections to Hindu beliefs. For instance, Atsuko Watanabe was influenced by a Japanese Zen priest running a lodge for Japanese travelers in Kathmandu, Nepal, and Masanori Oe realized how Hindu beliefs encompass Buddhism. Others saw the contentment of the people living without much material wealth and began living with less when they realized that they could. All were changed people.

The profiles are part biographies, interviews, and author impressions and experiences. In order to understand what their current lives are now, understanding the paths which brought them there are crucial and well conveyed. None of the interviewees are young, and with nearly a lifetime of introspection, there is a wealth of material, both in quantity and quality.

Their personal philosophies are complex and difficult to comprehend, probably even in the original Japanese. Few have taken pure versions of conventional philosophies or religions, rendering convenient labels nearly useless to describe their beliefs. For instance, Atsuko identifies herself as Christian, specifically Catholic, but with decidedly Buddhist inflections.

Executing all these tasks in writing is a tricky matter. Taken individually, an insight or comment may have great weight, but a string of them can soon turn into a blur if the author does not steer a clear course. Although the presented beads of wisdom are valuable, the book’s sometime weak direction leaves only the most ardent to navigate the mass of material solo.

In all fairness, the task of trying to convey the meaning of these individuals’ lives is monumental. The author has amassed a wealth of material in the course of the 15 years in his writing this book, and he had the same dilemma faced by many a film director – letting go of some valuable material in order to get a more effective narrative.

Nonetheless, there are riches within the covers in A Different Kind of Luxury for those willing to walk the path of discovery.