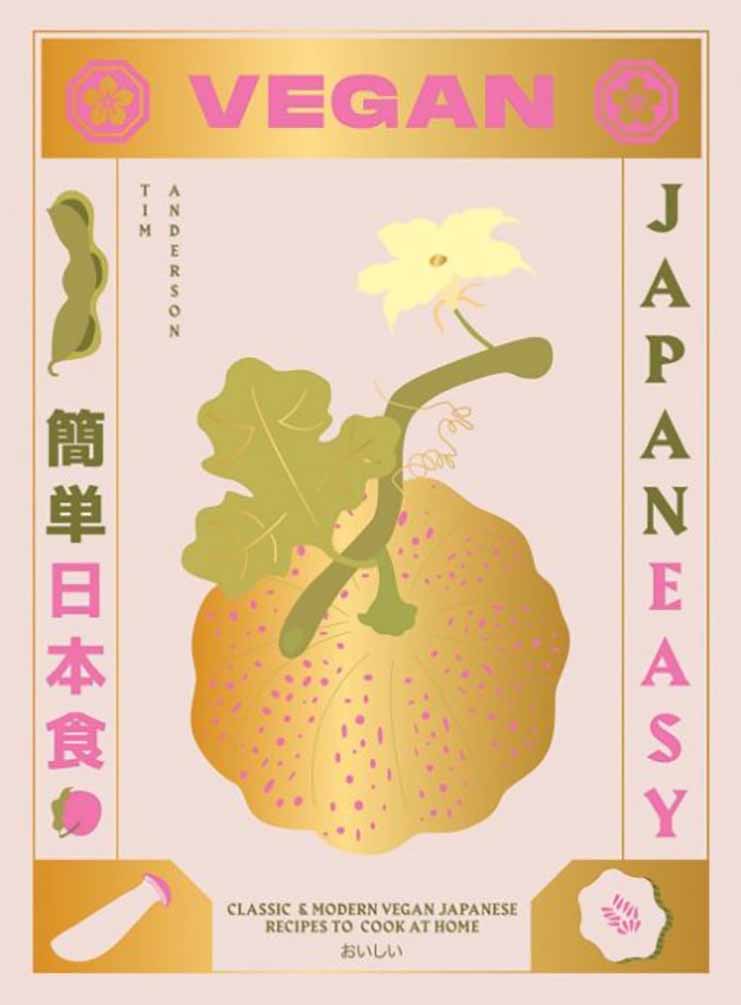 The first thing I looked for, when confronted by Tim Anderson’s latest book, Vegan JapanEasy: Classic & Modern Vegan Japanese Recipes to Cook at Home, was who designed the book cover.  When you aren’t vegetarian or, shudder, vegan (those svelte, pale replicas of humans staring down their veggie-laden forks at you) one seeks other things to consider.  For instance, when dining with friends or family who have a “thing” (usually critical) about me (staring blankly at my plate burdened by green or starchy foreign objects with unfamiliar names) I find myself, teeth clenched, desperately praying to be elsewhere.  This is my disclaimer: I AM (as I once responded to my five-year old vegan niece who asked why I ate meat) A CANNIBAL.  There, I said it.  I would have said “carnivore”, but she was only five.

So why, you may ponder, would a rabid devotee of flesh from the kingdom of animalia consent to review a book so obviously first tier repulsive to one such as I?  Second disclaimer: It was the book cover.  The beautifully designed, wonderfully iridescent, luminous embossed cover that reached out and grabbed me by my capitalistic “Got to Have It” sensibilities.  Plain and simple.  I lusted to plant that volume on my bookshelf.   The sacrifice one goes through for unfettered greed.

The third, and final, disclaimer.  After receiving the trophy cookbook, and thumbing quickly through it, a feint inkling of familiarity crept through my fever-ridden body; followed immediately by a strong thump-on-the-head realization.  I know this, whatever it is: person, work, whatchamacallit.  Racing to my bookcase with its burgeoning row of reviewed titles, I pulled out Tokyo Stories: A Japanese Cookbook.  Its colorful neon-electric glow, with contemporary Edo icons on its embossed cover, immediately spawned a cognitive “Aha!” recall.  “BINGO!” I bellowed.  Hastily, I identified the artist (Evi O), who turned out to be the designer of both of Anderson’s books. “BINGO!  BINGO!” I delighted.  Mysteries solved.   Smug and satisfied, I began the review process.

The 2020 publication of Vegan JapanEasy arrived in the marketplace of booksellers on March 3rd.  It was quickly conferred a prestigious recognition.  In the NY Times April 20th article “11 New Cookbooks Worth Buying, Even in Quarantine” it was anointed one of the “eleven” by food reporters and editors of the venerable paper.   With high praise, the review intoned: “. . . this cookbook teaches readers how to cook holistically: You’ll rehydrate dried shiitake mushrooms and cure them in soy sauce.”  Shaken by this vision of a dreary road ahead, I leafed gingerly through the pages of my newly acquired, now somewhat tainted prize.  “We shall see”, I muttered, and settled down for the big “read” before me.

Tim Anderson, born and raised in Wisconsin, now resides in London.  His mid-western gaijin/hukujin heritage, which ordinarily might raise eyebrows regarding his qualifications to write a Japanese cookbook, is laid to rest by his background of significant bona fide credentials.  A chef, food writer and restaurateur who, at age 26, was the youngest winner of the MasterChef UK champion competition — a title he took in 2011 via his dish of “souped-up ramen with porcini-infused pork broth and lobster gyoza with black truffle”.   The author’s fascination with Japan has had a long and mutually beneficial run.

His first encounter with the “rising sun” country was as a high school student.  Later, in 2002 he moved to Los Angeles to study Japanese history and food culture at Occidental College.  In 2005, Anderson crossed the Pacific to the isles of Nihon.  On a research grant, his intent was to investigate Japanese foods for his senior thesis.  It was then and there, he noted, that he “discovered the great diversity that Japanese cuisine offers.”

In 2006 he moved back to Japan and taught English in Kyushu where he met his future wife, who was from London.  In 2008, they moved to Big Ben territory.  There, he started a pop-up restaurant in 2013: Nanban served both traditional and contemporary Japanese dishes that combined the “flavors of Japan with those of other cultures.”  Two years later, he resettled Nanban permanently in the Brixton part of London.  It soon morphed into an award-winning 80-seat space described as “a Japanese soul food restaurant with a casual, sociable atmosphere.”  His second restaurant, Nanban Central opened in 2019, the same year TimeOut London named him one of the city’s top chefs.

To begin, let’s start with its heaping infusions of brassy, brazen (some might say “ballsy”) running commentary.  I happen to be one who gloms onto the irony and humor of sporadic, audacious over-stepping-of-the-line endeavors.  Not everyone is.  Anderson’s smirky opening disclaimer to his vegan cookbook, “No animals were harmed in the making of this book” (followed by tongue-in-cheeky amusing and entertaining descriptions of animal interactions) informs the reader that this author has a wickedly cock-sure sense of humor.  His “Umami Dearest” title and “Confession” placard (replete with plump sausage insolently propped against it) followed with the statement, “I’m not vegan, or at least, not officially, but I am vegan frequently and accidentally”) confirmed a left-of-center comedic bent.  I have to admit, it helped seal a spiritual, soul-mate bond between us.  So, damn the dreary ‘rehydration and soy-ful curing of shitake’ Times piece that had initially augured a grim snooze-fest review.  Shaking off my previous apprehension, I settled in for a front seat roller coaster ride on the Tim Anderson vegan volume that signaled a puckish, foreign fare (to me) education of tight turns and learning curves.

It is apparent throughout the book, especially in his recipes with their direct approach, that Anderson’s tone is lively and provocative.  The titles and introductions are good examples: the Rough Night Rice Recipe (“Rice has always been one of my favourite (sic) things to eat when I’m blotto.”); and the Surprisingly Awesome One-Hour Spicy Sesame, Aubergine and Courgette Ramen Recipe (“Ramen is a bit like marriage, you know it’s going to take a long time, but nobody tells you it never ends until it’s too late.”); and his Pimp Your Edamame Recipe. (edamame is “a blank slate in terms of flavour (sic) . . . it’s also a little boring.”).  His recipe romps are filled with fun and a spirited joi de vivre.

While it is generally understood that “Japanese cooking is often inherently plant-based” and “vegan or nearly vegan friendly”, for those chomping happily on teriyaki chicken and wagyu beef these thoughts are either remote or non-existent.   According to Anderson, Japanese meatless dishes deliver rich and satisfying flavors because the ingredients are “good at delivering umami” (savory taste).  How so, I thought, to get to Ah-so (desu-ka)?  I set out to discover this in his book.

A Japanese pantry, according to the author, is laden with seven primary ingredients: rice, soy sauce, mirin, rice vinegar, saké, miso and kombu dashi”.  Anderson has assimilated approximately 80 plant-based recipes (including four drinks) that he describes as accessible, inherently effortless to make, requiring no special equipment, using easily acquired ingredients found at the local supermarket.  Should the hunt for an ingredient from a grocery store be futile, the author states, it will be located on the internet.  If not there, he decrees, its recipe was eliminated in order to fulfill the book’s goal: “to make Japanese cooking more accessible to all.”

Ever up for a challenge, I searched the world-wide universe via online shopping behemoth Amazon.com for recipe ingredients kombu, celeriac and yokan (all unknowns to me).  Et voilà!  Quicker than a click on the credit or debit card button, the “Work hard. Have fun. Make history” high traffic e-commerce “everything store”, with its vision to “build the Earth’s most customer-centric company” and the promise to bring products “from A to Z” to everyone regardless of which country they live in – Placed The Items In My Cart!  Note to self: Got to print those recipes.

The book explores and utilizes the abundance of Japanese dishes that are vegan, nearly vegan, or with a simple substitution or two can be easily made vegan.  A sampling of his recipes includes inventive dishes: Jackfruit Karaage; Mock Meat Menchi Kasu; Soy Sauce Butterscotch Brownies; Watermelon Mojito.  But the majority lie within most people’s comfort zones: Pesto Udon; Fried Tofu in Dashi (Agadashi Tofu – one of my favorites); Kale with Crushed Sesame; Vegetable Tempura.  Each recipe is introduced with Anderson’s personal stories related to the ingredients or reminders of similar dishes or special ingredient notes or food histories, etc.  Every recipe includes a full-page color photo of the finished outcome.

All measures use International and U.S. standards.  Recipe instructions, for experienced cooks are easy to follow.  For the beginner or kitchen novice, it may prove to be more of a challenge.  His directions for browning tahini and sesame seeds (a relatively simple process): “fry until it goes from camel-coulered (sic) to. . . . let’s say taupe”.  For making Japanese mayo: “you can just whisk the hell out of everything in a bowl until it comes together”.  For some individuals, directions like these may lack a certain clarity.

Beyond the norm-al approach to cookbooks, Anderson’s Vegan JapanEasy is a grand romp: educational, entertaining, creative and filled with a myriad of interesting (and delicious) recipes.  All things considered, I may be enticed to dismount my carnivore high horse long enough to make his veggie volume a permanent kitchen fixture.