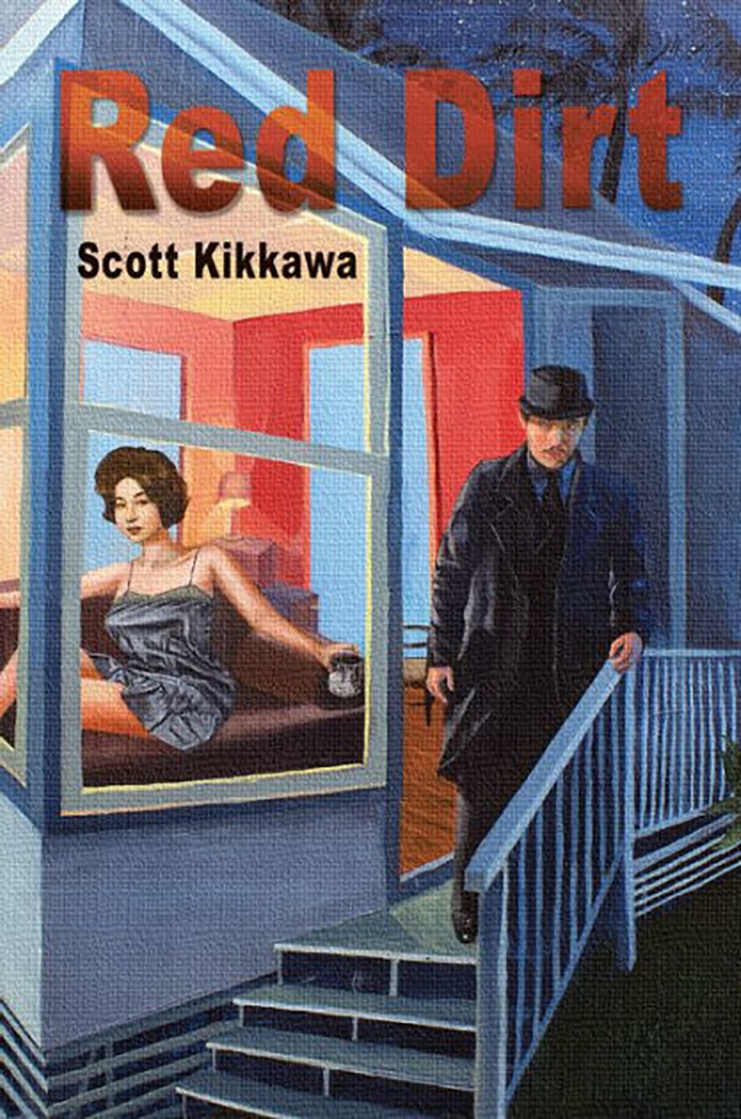 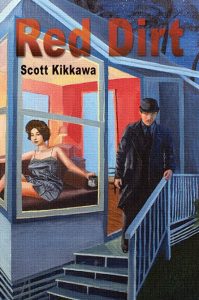 Red Dirt is the second in a series of detective novels by Scott Kikkawa. New to this genre of writing, I am struck by how the many unanswered questions, revelations and unexpected plot twists and turns are true for life as well. So, many of the one liners, detailed descriptions and inebriated musings take on deeper meaning.

The story is set in the 1950s in Honolulu, Hawai’i. It is a view into a past time of Hawai’i, which still lingers here and there today. In the introduction, the main character, a Japanese American WW2 veteran who served in the decorated U.S. 442 Army division, says: “We were all trying to prove we were Americans.” But this was true for more than Japanese American former GIs. At the time the book takes place, Hawai’i is not a state but a territory, and many non-Caucasian residents who were born and raised and were the ethnic majority in Hawai’i did not feel a part of the rest of America. With racism erupting in and around World War II, being considered ‘American’ was an ambition of many.

Changing ethnic names to something more familiar to a white American perspective was often a dubious alteration. Characters in the book Francis Hideyuki Yoshikawa, becomes ‘Sheik’; as Ichiro becomes ‘Ike’; Hajime becomes ‘George’ and Trang becomes ‘Tammy’. Yoshikawa is also called “Frankie” by those closer to him.

The title Red Dirt is a play on words and a description of the area where the crime is discovered. Red dirt is the color of the soil in this area of central O’ahu, a blue-collar working class of field workers and pineapple fields. Red dirt also is a play on the American/Communist tensions behind the ‘Red Scare’ pervading American society at the time. It also is the setting for Frankie’s challenges of trying to be ‘American’ while trying to uphold values that are universal.

Frankie talks about the red dirt at the crime scene staining everything from clothes, cars, houses, etc. Today there are places in Hawai’i that sell t-shirts that are dyed permanently a reddish hue by soaking in red dirt water. The stain of prejudice, racism and fear similarly is difficult to wash out and remains even with hard scrubbing.

“Le Morte D’Arthur” is the classic tale of the death of King Arthur and fall of the knights of Round Table. It is Frankie’s book of reference for high ideals and strong values that erode into failings, betrayal and collapse as was the fleeting glory of Camelot. Frankie sees the cracks in Camelot all around him and fears that his life too will crumble into corruption and decay. But he tries to brace himself against that gravity with the hope of learning from his mistakes.

In this context, Frankie talks about ‘Giri’, the Japanese value of duty or obligation. But when ‘Giri’ is transplanted into Japanese American consciousness of the 1950s, it crashes into the lust of appearing more American and morphs into a twisted imbalance of patriotism, ethic pride and shame. Frankie says; “Giri. Shit. Sometimes I hate being Japanese.” Even today, ‘Giri’ is still complicated as it is desired.

Frankie talks about how he started to understand ‘Giri’. It is swaddled in a moving telling of the 442nd and Art (whom he befriends) and their experience on the field of battle in France. A group of 442nd soldiers charge a hill to rescue a group of soldiers from Texas pinned down by German fire. When they break through, the soldiers weren’t sure who it was. “What are they? Did the Krauts bring ‘em in?” “No I don’t think so… They’re ours! He’s one of our Japs! We’re safe!” To which Frankie yells: “No shit, Hop Along, I am one of your Japs!”

There is a romance that began in first book between Frankie and Ellen Park, a Korean American reporter for a small local independent newspaper. I thought the cultural differences between Ellen during this time period were glossed over and idealized. For me, the personality and ideology differences between Frankie and Ellen beg the question, ‘How are you loyal?’ With peril pressing in, how do you support, protect and stand with someone you care about? Trying to answer, Frankie struggles with what is more important: principles or people?

Kikkawa often backs off from heavy intensity to change the groove. When Frankie interviews a group of local Communists, Kikkawa peppers the usual stylized detective drone on “grey flannel and pink fingernails” and describes the angry face of one the suspects: “Her face looked stretched up over her skull, like Saran Wrap on a cold chicken.”  That made me laugh but also made me look up when Saran Wrap was invented. Maybe a good detective story makes one investigate one’s questions.

Red Dirt ends in a flurry of plot twists and turns and Frankie trying to do the best for Ellen, his family, for people he doesn’t agree with but respects their commitment to ideology and for the memory of those he wronged. Along the way Frankie accepts the way of the world as he has experienced it, but laments: “The world can never be just, but it should be consistent.”

Maybe he found some peace in that as he files his report with significant facts left off. “In the end, I believe my omission served justice… A lie for a lie, if that’s not justice, I don’t know what is.”

In the end, Frankie tells himself he has escaped the downfall of Camelot in his life. But it makes you wonder whether Camelot was a doomed concept to begin with: a booby trap laid for the pure of heart and the noble minded to believe in and then to be deceived by their own doing and good intentions. Maybe the real detective story is to uncover the truth and the fallacy in that.