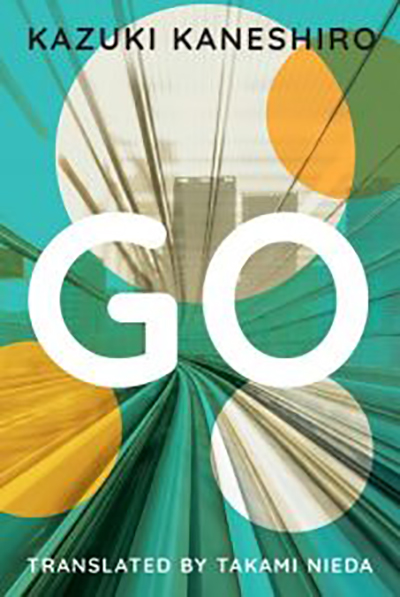 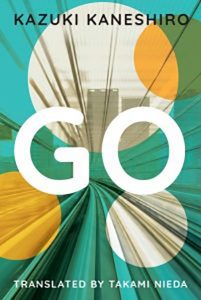 When Sugihara sings along to one of his favorite Bruce Springsteen songs, he amends the lyrics to “Born in Japan.”

Which he was. Sugihara’s name is Japanese. He attends a private boys high school in Tokyo. He grew up speaking the language, and he looks like an ordinary Japanese boy. However, in the eyes of his classmates, his teachers, his parents, and the Japanese government, Sugihara isn’t Japanese. He’s Korean.

The protagonist of Kakuzi Kaneshiro’s book GO, Sugihara is Zainichi. The word means “staying in Japan,” but it’s the term used for people of Korean descent living in Japan. After World War II, Koreans in Japan were granted something of a permanent temporary status: they could remain in Japan, but without gaining Japanese citizenship, even for their descendents. Zainichi people have been the victims of both official and social discrimination; the worst of the anti-Korean laws weren’t repealed until 1993.

GO was published in Japan in 2000 and became a bestseller, spawning a 2001 movie adaptation that won over a dozen major film awards. The excellent English translation by Takami Nieda came out last year, one year after the first major book on the Zainichi experience in English, Min Jin Lee’s Pachinko.

Sugihara is scrappy. He responds to bullying with his fists. He learned to fight from the one opponent he’s never been able to beat: his father. But Sugihara will tell you—only somewhat facetiously—this isn’t a book about schoolyard beatdowns or racism or history. It’s a love story. When he falls in love with a mysterious girl named Sakurai who assumed he’s Japanese, Sugihara has to decide whether to reveal his true identity:

Sakurai drew her legs, which had been stuck straight out at me, back to her chest and sat with her arms wrapped tightly around them. Her body looked terribly small. “But I was North Korean until the second year of junior high. Three months from now, I may be Japanese. In a year, I may be American. And I may be Norwegian when I die.”

In other words: it’s complicated.

Despite Sugihara’s protestations, the love story is GO’s weakest link. Sakurai doesn’t seem to have much to her personality beyond being cute and playful and suffering from deep-seated racism that clears up as easily as the common cold.

But I can understand what Sakurai sees in Sugihara, because spending time with him is a delight. He’s funny, angry and sensitive, often within the same rant. To earn the respect of his classmates, he drops down onto the tracks and outruns a train. He’s stupid and whip-smart and idealistic in a realistic human teenage package. And his contempt for the arbitrary privileges and punishments that come with nationality and citizenship is perfect for this political moment.

GO was Kazuki Kaneshiro’s semi-autobiographical breakout novel, and he’s written many books since. I hope they’ll follow GO across unnatural national and linguistic boundaries and into English translation.

IE: How did you first encounter GO, and what was the process that led to this translation?

TN: When I read it in 2000, it was one of those books where I instantly felt like, this has to be translated. And I felt like this was a book that I wished I had read or encountered when I was growing up. So I kind of connected with it in such a personal way. And I didn’t know about this particular population existing in Japan, and that kind of lent itself to all these different parallels of myself growing up in New Jersey. So I really, really connected with it in a very personal, visceral way.

And then when I had those feelings, I just did a really stupid thing, and I decided I was going to get in touch with the author. I tweeted him, because I didn’t know any other way to do it. And this was quite a few years after 2000. It was actually about 2011, I believe. And I tweeted at him, and I basically poured my guts out and said, “I really love this novel, it would be great if you’d allow me to translate it.”
And he was really receptive to that idea. And after that it was all about making certain that the publisher, who acts as the agent in Japan, was involved, and we just went through all the formal channels of getting the rights and such. And then eight years later, there it is!

IE: Were you already working as a translator at the time you first read the book?

TN: When I first read the book? No, not at all. I’ve only come into translation since maybe 2006.

IE: What parallels did you see between Sugihara’s experience and your own?

TN: Growing up in New Jersey, inwardly I was quite a rebellious kid, but I really didn’t know that that was a way that I could actually behave. Because I didn’t have that model around me. So I felt like, gosh, if I’d known this book, if I’d known Sugihara in person, that would have kind of opened the doors in terms of how an Asian kid in a majority-white culture could have acted towards injustices and prejudices and bullying and stuff like that. Those are the things that I sort of drew from.

IE: Have you read other stuff about the Zainichi experience?

TN: I’ve actually completed a sample translation—it’s actually in negotiations with a publisher, I can’t talk about it yet—but it is by a 3rd-generation Zainichi writer, and she was shortlisted on the Akutagawa prize one year. And it’s semi-autobiographical. It’s about growing up Zainichi in Japan, but this time it’s told from a young girl’s perspective. It’s going to be fantastic.

IE: Walk me through your translation process. You read this book, you decide you want to translate it, you get in touch with the author…

TN: By then I’d already read it multiple times as a fan, a superfan. The first time I think I just went page by page and went line by line and did a very quick draft of it, make certain that all the facts are down, with no sense of—the sentences didn’t read very well, but I knew that all the information was there. So I kind of paid attention to fidelity there.

The second draft, I still had the book next to me, and I’m still kind of fiddling around with making certain that the character’s inner motivations are popping out through the dialogue and through the prose. And then at that point I usually put away the book, so I trust that it’s all correct. Then I start playing around with the language and the syntax.

IE: How challenging was this book compared to other books you’ve translated?

TN: I get that question a lot, and I don’t want to feel like I’m boasting, but this particular novel was pretty easy for me, because that voice of the character, it’s exactly my voice. It’s really rebellious, it’s sardonic, it’s smart-alecky, it’s wise-assy, and that’s kind of the way my mind works. So that language, it just kind of tripped out of my mouth. So it was relatively easy. Easier than other ones, let’s put it that way.

IE: There was a line in the book that I really liked, where Sugihara says, “Language has everything to do with your identity,” and his dad pushes back on that. How true do you think that is, and do you find different parts of your identity come out when you’re speaking Japanese vs English?

TN: Yes. I sort of naturally accommodate or form my identity in terms of what I’m allowed to say in a specific culture. And I didn’t realize to what extent until I’d actually spent five years teaching in Japan at a pretty conservative university that. And that helped me, that really informed me about how much I’m used to censoring myself when I speak in different cultural contexts.

Otherwise—I don’t know if it’s a blessing or a curse—but the fact that I present myself as very American in my cultural values, my cultural knowledge, it’s based in America. However, I speak Japanese very fluently—well, fluently—and so I have to be careful about not expressing myself in the manner that I’m used to here, because I very easily can. But just because you can doesn’t mean that you should.

IE: Are there any misconceptions about translation work that you wish you could dispel?

TN: There’s that great quote that often gets quoted by Jay Rubin. Like, when I translate Murakami, what you’re getting is 95% me. That’s such a provocative statement, and all these people kind of savaged him for it. But in a way, he’s entirely right. I mean, this translation doesn’t birth itself. It really is a kind of creation, and it’s really not a falsehood to say that 95% of the language, the words, the word choices that you’re reading are the translator’s.

Maybe the more palatable way that a lot of people want to think about it, and I actually like this sort of rendering, is that a translator is basically the pianist who’s bringing to life the composer’s music. In a different translator’s hand, it could sound very, very different. It’s just a rendition.

Takami Nieda is an instructor in the English department at Seattle Central College and the translator of many Japanese books and comics. This interview has been condensed.