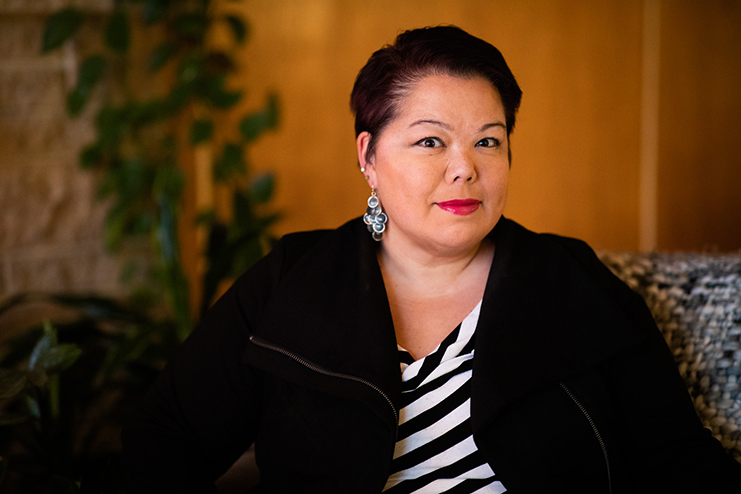 On Oct. 14, Naomi Ishisaka began her first column as The Seattle Times’s social justice columnist by talking about what she learned from her Japanese American father, who was born in an internment camp. Since then, she has touched on a range of topics, including technology, affirmative action, prison reform and immigration. Ishisaka sat down with the International Examiner for a conversation about her new role.

IE: I want to start by thanking you for your column. What’s your experience been like as The Seattle Times’s social justice columnist?

Naomi Ishisaka: It’s been amazing. I read enough of the reporting and columns in the Times, and the comment sections that go with it, before I started to know that articles that are about race or social justice get a lot of blowback. So I was prepared for that, but I think it was the difference between being intellectually prepared for something and then being emotionally prepared. That took a little bit of time to get used to. I really believe that you can’t let someone make you something that you’re not, so if somebody wants to yell at me and call me names and be mean-spirited, that’s on them and how they want to behave, but they can’t make me behave that way back, right?

So no matter how nasty and mean an email or comment might be, I always try to be as gracious and appreciative as possible, and then also be honest. So if the things that they’re saying I disagree with, I’ll say I respectfully disagree, or we have a difference of opinion, but here are the places I think we do agree, or here are the places where there might be some more information that would be helpful.

IE: So you have had back-and-forth with people?

NI: Yeah, lots of that. I answer every email and often that email yields another email and another email. What’s been really beautiful is there have been some people who have written some pretty hateful things and, in the process of having that dialogue, we don’t have as much of an adversarial conversation anymore. It’s a much more constructive conversation.

IE: What tactics do you use to talk to people when they’re coming at you in a very adversarial way?

NI: I just try to recognize that a lot of the anger and frustration people feel is very much due to fear and a sense of losing something. It’s hard to reason with fear, but at the same time, I think there are always opportunities to show the humanity in ourselves and each other, right? And that’s not for everyone to do. There are people who are really targeted by policies and decisions and who bear the brunt of the worst of the policies. And then there are folks who have more privilege than that, and I have privilege in some ways. We all have different ways in which we carry privilege in our lives, and I feel like that gives me more of a responsibility to have those conversations and be more of that bridge.

IE: And that privilege comes to you from having the position of being a columnist?

NI: Being a columnist for this paper, but also being someone who never had to struggle for food or housing or basic things like that. And then being Asian American comes with a certain privilege for certain folks. Obviously, it’s not true across the board, but there are definitely privileges that come with being Asian American. I feel like a lot of us could do more to be accountable to that and then also do something with it.

IE: That makes me think a lot of your piece on the recent battle over affirmative action with Referendum 88, the opposition to which was led by a group called WA Asians for Equality.

NI: Yeah, that was really important to me to start with that column, because I think we have to be honest about the ways in which we fall short and our communities fall short and how we aren’t standing up for justice in the ways that we should be sometimes. I didn’t really hear people talking about it openly and honestly.

IE: In your first column, you said, “Let’s be brave enough to talk to one another.” What do you think is the state of the conversation around social justice and race in Seattle?

NI: I guess it depends on who’s having the conversation. There are robust, complicated conversations happening every day within communities of color that I’m part of. I know that’s not the case in other communities. I mean just thinking about this homelessness crisis… I feel like there are certain pockets that know that we’re all just one hair’s breadth away from a situation where we may be unstably housed. And then there are folks for whom that’s inconceivable and they can’t put themselves in those shoes. I think the conversation is happening, but probably not in the places where it needs to happen the most.

IE: I’ve seen you play the role of educator, talking about the Four Amigos and other points in history. Is that something you really wanted to emphasize?

NI: Definitely, definitely. A lot of people have told me, what’s the point in trying to get people to care about whatever topic when they’ve indicated that they’re not interested in caring about it? I’m like, well, we have to at least try, you know? We have to at least try to appeal to folks’ consciences and their shared humanity. Whatever topic it is, we’re all on a journey of growth and development.

IE: What can mainstream media be thinking about when it comes to equity and telling stories representing our whole community, not just a section of it?

NI: If you’re talking about an issue or a subject matter that impacts a certain group of people, making sure to actually talk to those people. That seems really obvious, but it’s actually not for a lot of folks. I think we’re used to gatekeepers or experts or people who are “qualified” to tell that particular story, but oftentimes we forget to talk to the people who are most impacted by the issue and that’s something that’s a really big value of mine — to always center the voices of the most impacted.

That takes a lot of relationship-building. A lot of times folks want to check a box, and they want to say “oh we did X” without having done the hard work to build relationships and community, which takes a long time, and trust-building, which is not something that happens immediately.

IE: That’s what I’ve seen a lot — a gap in relationship-building capacity because of the time it takes.

NI: Different communities don’t often get to interact with others. We’re still a very segregated society and community.

IE: Does that seem to be the case with the affirmative action issue that we were talking about earlier? The group that is against it, they’re segregated in their specific community within the Asian community?

NI: Totally, it plays a huge part of it. Some of the folks I interviewed for that story come from the same communities as those that were opposing the initiative, and they said for the most part you would never encounter anyone who wasn’t white or Asian in your daily life, so it’s very hard to make any kind of connection when you haven’t really been exposed to anything else. And that’s a huge disservice.

IE: That is why the Four Amigos is such an important story because they are an example of how by working together, everybody gets lifted up.

NI: Right, right. How quickly we forget or never learned.