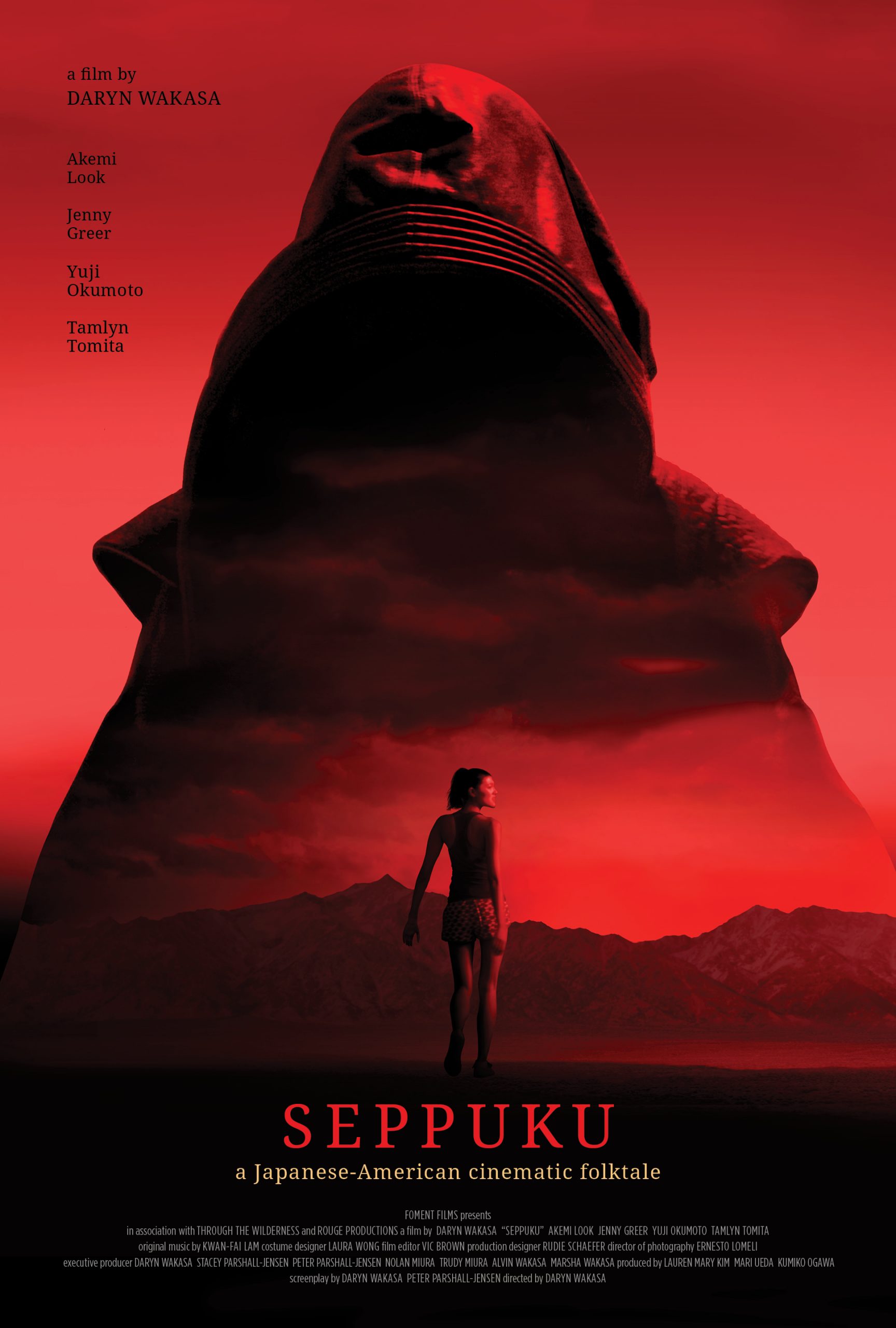 Daryn Wakasa is director of the experimental supernatural thriller Seppuku, which explores the intergenerational trauma of WWII incarceration of Japanese Americans through the struggles of its protagonist Mari Yoshimori (Akemi Look), an Olympic athlete. Wakasa will have a screening of Seppuku at the Seattle Central Library alongside poet Melissa Bennett, who will be reading poems about her family’s experiences as Native Americans in the boarding school and the mental health systems on Wednesday, Oct. 3 in the Microsoft Auditorium.

Wakasa spoke with International Examiner contributor Jennifer Lee through email about the film and its inspiration.

International Examiner: What was the inspiration behind Seppuku? Was it, in part, drawn from your own personal experiences? What did you want to achieve through this film?

Daryn Wakasa: Seppuku draws a lot of inspiration from my personal life. About 5 years ago, I was at a point where I either went against the grain to follow my heart and soul or give into societal pressures by maintaining a path of “normalcy.” As I went through that painful journey, I became more grounded in my culture, family, and in turn, found my calling. This personal journey is reflected in Seppuku as Mari is faced with the same dilemma.

For example, seppuku [ritual suicide] is a Japanese act that is only reserved for male samurai. As a Japanese American though, I find this problematic because I look at the women in my family and think they are some of the strongest people/warriors that I know. So why should this sacred act only be reserved for men? Thus, we wanted to subvert the Japanese tradition by making our warrior a woman.

IE: How did Executive Order 9066—President Roosevelt’s directive which forced over 110,000 people of Japanese descent into concentration camps during WWII—impact your family? Do you see the emotional residue left by this experience in your own life?

DW: My family were among those American citizens who were herded into camps like cattle simply because of their race. My great-grandfather lost his two coffee shops in downtown Los Angeles and was also taken away from his wife and five children. My grandmother and her four siblings grew up without a father. This was all a result of racism and xenophobia by way of Executive Order 9066.

Executive Order 9066 had a huge impact on my family. It ripped my family apart by taking my great-grandfather away from his family, it eradicated a generation’s worth of hard work and achievements, and it left the haunting presence of “not being good enough” looming over my family.

My grandparents were in their early twenties when they were taken to the camps. Being in the camps was traumatic enough, but the racism they faced after the camps was just as bad. Imagine being labeled as “different,” “not good enough” or “the enemy” from ages 20 to 35. I can’t imagine what that does to someone’s psyche and self-worth. That generation was strong-spirited, resilient and tough-skinned, but even I could tell that they locked away their feelings and never allowed themselves to process everything. This became evident when my grandmother’s mind first gave way to dementia. There are a couple of incidents where she kind of hallucinated and re-lived memories that we believe came from the concentration camps. The fact that her dementia triggered memories from that time period shows us how much she locked away the experience.

If these feelings were locked away inside, then I have no doubt that the trauma was passed onto my parent’s generation as well as mine. I find it fascinating that some of my insecurities are very similar to my parents’ and my grandparents’ insecurities. Four generations later, I battle certain insecurities that I believe are very much linked to the intergenerational trauma of the concentration camps.

IE: How has your family’s history and background affected the stories you want to tell through your work in general?

DW: My family’s background is the reason why I’m a storyteller. The injustice that my family fought through has created a burning desire to use storytelling as a tool to fight the racism, misogyny and bigotry in our society.

This is why I am really excited for the “Haunted Healings” event with Densho, the Seattle Library and Melissa Bennett. It’s a way to unite the Japanese American and Native American communities to not only heal, but to also stand in solidarity against the bigotry and racism that is trying to take control today.

Because of this haunting connection, we knew that art and storytelling could be a way to talk about intergenerational trauma within the two communities and could also be a healing session for us all.

IE: Part of the film takes place in Manzanar, one of the ten concentration camps for Japanese Americans during WWII. Why was it necessary to film there given you had financial constraints?

DW: In order to capture the haunting of the Japanese American concentration camps, it was necessary to shoot at Manzanar. I was hesitant, at first, given the logistical constraints but my co-writer Peter Jensen pushed that we write the script specifically for Manzanar. I credit our amazing producing trio (Mari Ueda, Kumiko Ogawa & Lauren Mary Kim) who somehow found a way to make the impossible happen. Shooting at Manzanar was one of the most difficult aspects of the film but because of the amazing team, we got through it. In the end, it made the world of difference.

Being that the film was about the haunting trauma of the concentration camps, it only made sense to film on the lands where that trauma still looms. It’s hard to articulate in words but there is an energetic residue to those lands that not only materializes on screen, but also affected the cast and crew so that they could channel the spirit of the story. I’m a firm believer in placing creatives in the right environment so that magic can happen.

IE: Why do you think this film is important for the Japanese American community?

DW: Having been lucky enough to screen Seppuku across the nation, I have been absolutely touched by the response from the younger generations. From what viewers tell me, Seppuku is able to capture and materialize the haunting intergenerational trauma of the Japanese American concentration camps on today’s generation. The film has sparked a lot of dialogue about the trauma that many camp descendants feel. This dialogue is important because intergenerational trauma is not a topic that the Japanese American community has talked about openly. I think the conversation about trauma is opening up more because of how the younger generations feel and because of everything happening around us. My only hope is that we can use art and story to help exorcise some of this trauma so that we can heal as a community and stop the trauma from being passed onto future generations.

IE: Are you worried that Americans will forget about what happened over 70 years ago and have history repeat itself?

DW: There is a legitimate concern that people will forget, but I think the more pressing issue is that a) Not enough people know the concentration camps took place and b) people who know about the camps don’t always recognize the damaging multigenerational effects they had on Japanese American families. Both have given way to history repeating itself. Travel bans, detention centers for immigrants, parents being separated from their children, are all eerily similar to what happened in the 1940s as well as other time periods throughout American history. However, there are some amazing organizers, community leaders and artists emerging through the fog, so I am hopeful that we can find a way to break this oppressive cycle.

IE: You mention on the Seppuku website that you are interested in “liminal space.” What do you mean by this exactly and how is this interest shown through this film?

DW: As a 4th generation Japanese American in East Los Angeles, I felt like a walking contradiction. I was a baptized Episcopalian, but attended family funerals in Buddhist temples. I rocked Jordans, backward hats and Starter jackets, but took off my shoes when entering someone’s house. I spent countless hours trying to play “like Mike” and spent countless more studying for the elusive “A.” Japanese vs. American. I could never reconcile the two.

Seppuku embodies the spirit of the liminal space. It’s about connecting to your ancestors but fighting for that elusive American Dream. It’s about expressing oneself as an individual, but listening and honoring your family. It’s about the brutal pursuit to be great, but challenging oneself to be grounded in humility, love and compassion. Mari is constantly reacting to the collision of being Japanese and American.

IE: What do you think needs to be done to heighten interest and bring the spotlight on Asian American achievements in the media and the arts?

DW: This is a loaded question, but I guess to start — As Asian American creatives, I think it’s imperative that we push the artistry of storytelling forward. To generate interest, we need to be great at our craft.

In addition, I think we need to maintain the authenticity of our individual perspectives. Within the Asian American & Pacific Islander communities, there are a wide array of voices that need to be heard — from the Nisei women who fought through the concentration camps to Cambodian genocide survivors to the Asian American LGBTQ community to Indigenous Hawaiians who are losing their lands and every voice in between. We each have a responsibility to communicate our individual stories so that the American tapestry reflects our world more accurately.

IE: Are there any other films you would like people to be on the lookout for, either through Foment Films or at large?

DW: We are hoping to get some momentum on Sanjuro, which is a feature film inspired by Seppuku. I am also in talks with directing a short film project that I am very excited about. Fingers crossed that the short film project goes through as it will be an amazing team comprised of people around the country.

Interview has been edited for length and clarity