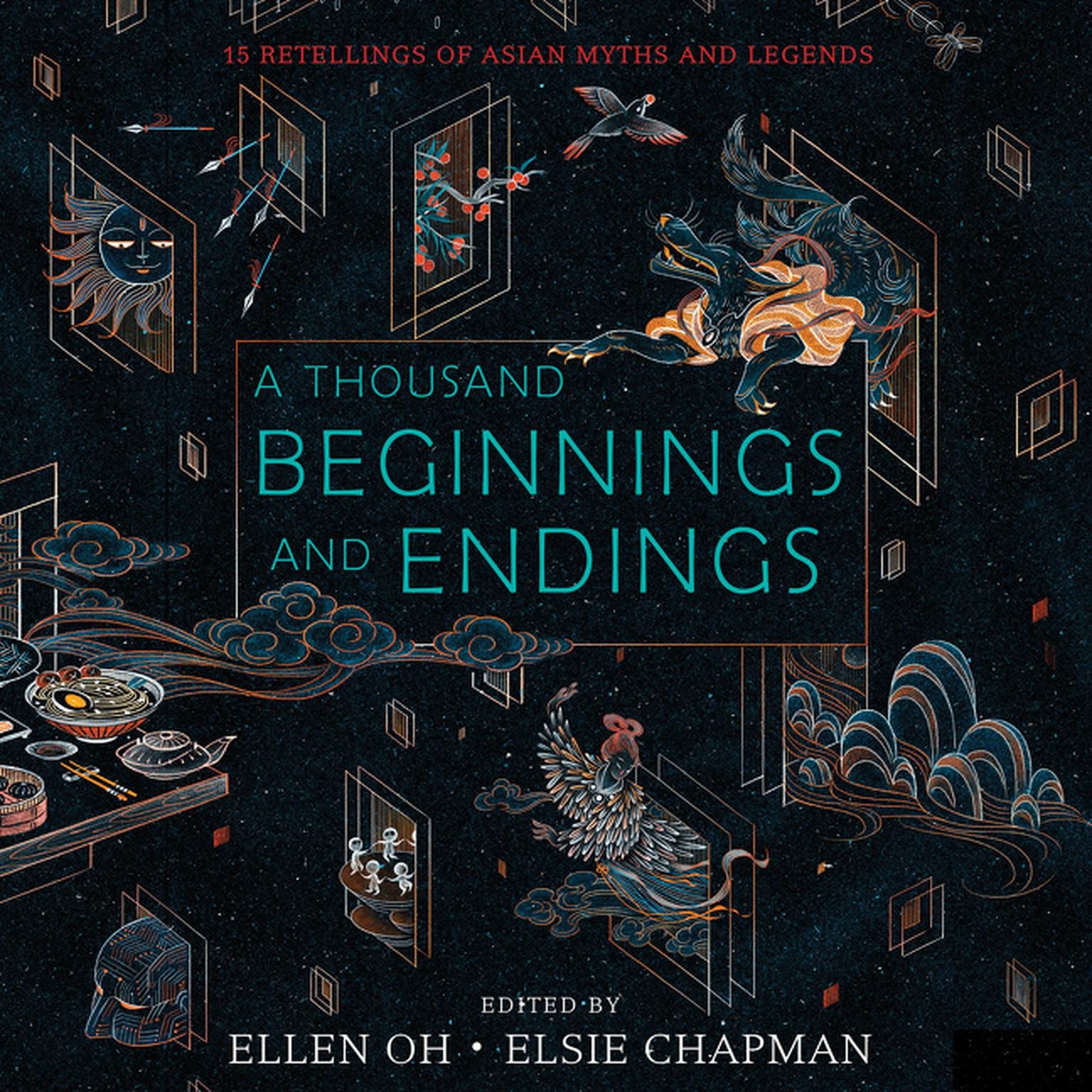 Like the Greeks, Asians have created legends and myths for hundreds of years. This anthology created by Ellen Oh and Elsie Chapman brings together ancient and modern views of these stories. This soulful collection warms the heart and delights the imagination.

A Thousand Beginnings and Endings brings together stories about strong Asian women characters and addresses questions like who are Asians and what does it mean to be Asian and Asian American? What are important values that Asian cultures transfer to their children through stories?

Some of the stories would be excellent children’s bed times stories, which isn’t to say older kids and adults wouldn’t also enjoy this cleection. One story is “The Counting of Vermillion Beads”, a Vietnamese myth about sibling envy by Aliette De Bodard. Another excellent piece presents the Japanese trickster, kitsune, a fox, who can change into a human form in Julie Kagawa’s “Eyes Like Candlelight.” Would you live with a fox’s family if you could save your village from the terrorizing demands of the daimyo?

Few books present the mythology of Asians and Asian Americans through the eyes of Asian and Asian American women. These stories arise out of the cultural beliefs of many cultures. For example, “Olivia’s Table” brings to life the Hungry Ghost Festival celebrated in China. Every year Olivia’s mother cooked a delicious banquet for ghosts, but she passed away last year. So is is up to Olivia to take her mother’s place. The banquet is an exorcism that rids a town in Arizona of ghosts who had “unfinished business”. Could Olivia make the dishes that ghosts would eat and nourish them so they could find their way home? This story weaves a myth from China to the strength of a present-day Chinese American girl.

This is an outstanding book and I recommend that you purchase it for your children, grandchildren, or other young people in middle school and older. Also consider buying this book for a teacher to diversify story-telling time and book report assignments. The stories are full of fantasy and ghostly characters, and the tales will provoke interesting discussions in the classroom.

The following is an interview with Ellen Oh and Elsie Chapman, editors of the anthology.

International Examiner: How did this idea come to light and why?

Elsie Chapman: We’ve been friends since making our debut together in 2013, and we’ve always thought it’d be wonderful if we could work on something together. The idea of co-editing an anthology seemed perfect, and even more so once we narrowed it down to doing retellings of Asian myths and folklore, all retold by Asian authors. We knew it’d go toward filling a huge gap in YA (Young Adult) literature, as there’s still a huge dearth in Asian stories in children’s literature, and too many of those stories are still being told by white authors.

Ellen Oh: I actually think we met back in 2011 when our debut group was formed. There must have been like a hundred debut authors in the group and I think there were only a handful of Asian authors. So it was only natural that we would become friends. But the conversation about Asian fantasy being written by non-Asians was a conversation that I actually had been having with Cindy Pon and Malinda Lo. The three of us had all written YA Asian fantasy books based on Asian culture and yet none of the lists of books that recommended Asian Fantasy included us at all. In fact, they were all lists of books by white authors. It was deeply frustrating and personally hurtful that our culture was so popular for white writers to write about, but when we wrote our own fantasy stories, our books were considered too exotic.

So when Elsie and I started talking about putting together an own voices anthology, for me it was a very personal desire for it to be a book of fantasy. Of Asian myths and legends retold by Asian writers in an authentic way that writers not of our culture could never replicate. And I think every writer in our anthology felt the same pride in being able to share their culture and their diasporic experience in their own unique way.

IE: How were the stories and authors chosen?

Chapman: We went to YA authors we knew, whose work we felt would be a good fit for the anthology. And we kept in mind, too, how we wanted to represent a wide range of genres, from fantasy retellings to more sci-fi to contemporary.

Oh: The list of people we wanted to ask was longer than the list of people we could actually fit in our anthology. The Asian kid lit writers community is small but getting bigger. Most of us all know each other or know of each other. We knew who we wanted to ask but we also had to make sure we were casting a wide range of Asian stories from East Asian to South Asian to Pacific Islanders, it was important that our Asian anthology be as diverse as possible.

IE: The writing is remarkable, and to have all of these stories in one book is a treasure for teens, educators, parents and others. What are you hoping your younger readers take away from the anthology?

Chapman: The feedback has been truly amazing, and we’re both so grateful and excited that a lot of readers have connected to well to all the stories. As kids, we really only knew about Greek, Roman, and Norse mythology, so would have both loved to have a collection like this in our own libraries. It’s thrilling that we’re able to do this for kids now, and we hope young readers will read this anthology and discover just how rich other cultures can be when it comes to storytelling.

Oh: Two things. First I want our readers to fall in love with the rich storytelling traditions of Asian cultures. Second, I want them to discover new favorite writers. That’s the beauty of short stories.

IE: Highlighting strong women role models is one of the themes in the book. What was the reason that you took this perspective?

Chapman: Myths and folklore still continue to resonate because so many of their themes are timeless. But at the same time, they can also be terribly outdated when it comes to the role of women and how it stands today. This anthology was a way for some of our authors to change that, to give their female characters in their retellings a real voice and real agency.

Oh: Let’s be honest, many Asian cultures are incredibly misogynistic and so are their myths and legends. Here was a chance for our authors to smash the patriarchy in their retellings. Aisha Saeed’s Smile is the perfect example of that. It’s exactly why we wanted to do a book of retellings. I also think that these stories and legends in the hands of writers of that culture, are told in a vastly different way than by those who are not of our culture. We don’t objectify and tell exotic tales focusing on stereotypes the way non-Asian writers do. As an Asian woman, that was so deeply important to me.

IE: How can teachers use the stories and myths in the book with their students? What do the stories say about leading our lives today?

Chapman: There’s still not enough stories on the shelves where kids of color are the heroes, and that was one of the main goals of this anthology—for non-white readers to realize they don’t always have to be just the sidekick, or the best friend, or the enemy. The world today is so diverse, and we’re always working for children’s literature to come to reflect this. We’d love for this anthology to inspire POC (People of Color) kid readers to then go on to write stories featuring kids just like themselves in all roles.

Oh: To me, this anthology was about making our culture – our myths and legends, accessible to western readers who are so used to western mythology. I want teachers to use this book instead of the same old same stories that they’ve been using since I was a kid in public school.

IE: What is your next step? Will you create another anthology or come up with a different project? Have you thought of turning one of the stories into a picture book for young readers?

Chapman: We don’t currently have plans for another anthology together, though we’d love to if the opportunity came up! And the idea of the anthology as a picture book is amazing—one can always hope! In the meantime, each of us has upcoming projects that continue to work toward increasing diverse reads for kid readers. I’m co-editing the YA anthology Hungry Hearts with fellow POC kid-lit author Caroline Richmond, a collection of short stories that explores the intersection of culture, family, love, and food, and it features marginalized authors and comes out June 2019! My middle grade debut All the Ways Home is set in Tokyo and releases May 2019, and I’m contributing a short story to Color Outside the Lines, a YA anthology edited by Sangu Mandanna that focuses on interracial relationships.

Oh: If we were asked to do another anthology, I already have a list of writers I’d ask. So I’m ready! But I’m also pretty busy working with WNDB (We Need Diverse Books) and our WNDB anthologies as well as my own books. I have a middle grade fantasy coming out next year called The Dragon Egg Princess and have a story coming out in WNDB’s anthology The Hero Next Door.