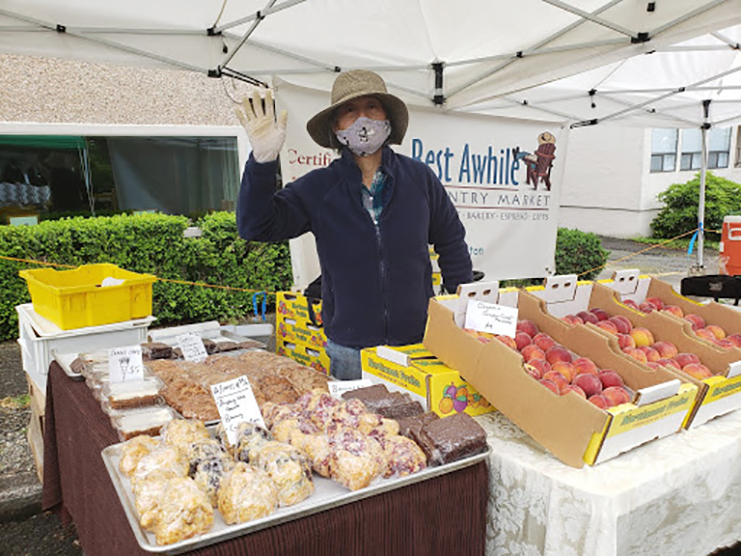 At a few of Seattle’s farmers markets, there is a simple stall adorned with crates of organic fruits from the fertile soils of the Methow Valley. In the fall, handwritten signs indicate the variety of each apple (over 12), like the rich, red Winesap or the pale-yellow Winter Banana (apple). During the summer, the display is even more glorious: boxes of large yellow peaches line the tables next to sunset-ombréd apricots, along with bags of Rainier cherries, Bing cherries, and Van cherries. The farmer behind this stall is Amy Wu, and she is my aunt.

Auntie Amy is the founder of Rest Awhile Country Market, a farm in Pateros, Washington. She sells her fruits in Seattle area markets, including Edmonds, Mercer Island, Madrona, and Ballard. Her business is known for its premium fruit, proving itself when her customers consistently come back. One customer says, “This must be the apple from Snow White,” as she points to a beautiful Ida Red. I smile as I put the apple on the scale. I’ve been helping Auntie Amy with her sales, just in time to experience the last bit of the apple season. I’ve realized that joining her at the market is quite a special way of getting to know her.

“I started farming knowing nothing about farming, nothing about retail, but I’ve been doing it for over 15 years, and here I am,” she tells me, gazing out to the market. Her successes have not come without challenges, however. Her store, which is humbly situated on the side of Highway 153 and the Methow River has seen a 50 percent drop in traffic due to the pandemic. There are fewer people traveling these days, compared to when she would normally see folks stop bustle in and out for a quick bite to eat or to grab some freshly-picked fruit. In addition, the threat of wildfires has risen in recent years. In 2014, the Methow Valley suffered greatly from summer wildfires, taking about 30 percent of her farm. This year, the farm was spared from local wildfires by three miles.

So why has she invested over 15 years in this field that is tumultuous, laborious and incredibly unpredictable? It’s because for her whole life, Auntie Amy has been chasing challenges. She tackles them with an incredible force of determination and commitment. It’s been a lifelong theme of ambition and independence. She chuckles and tells me a story of her childhood in Hong Kong: a terrible typhoon was conflicting with her plans to watch a movie. Taunting Amy, her mum offered her some change, assuming she would come to her senses and keep indoors. Amy went into the storm and saw the movie, in all rebellion.

In the 1960’s, her family immigrated from Hong Kong to the San Francisco Bay Area. She went to elementary school in San Francisco, high school in Oakland, and attended college in San Diego. There, she studied biology and worked as a lab technician for five years before pivoting her career to software development. Auntie Amy blossomed in this new career, rising the ranks from a system engineer, to a project manager, and finally to database specialist. Along the way she started a family and worked and traveled to Israel and Egypt. Her venture into farming started because she desired a place to retire; when she found a spot in the tranquil Methow Valley, she stood with her husband in awe. The rest is history.

I asked Auntie Amy once how she felt about the change in describing her occupation as a software developer to now, as a farmer. She shook her head and said instead, “I am a professional student.” For how impressive and varied her endeavors in different fields were, she displays great humility. The combination of her daring personality and her persistence is why I’m proud to be her niece. And hidden, but ingrained in all the labor, is her love.

“Well,” she pauses, “There must be a reason why I’ve been doing this for over 15 years, right?”

Until the end of December,  Auntie Amy will be in the Ballard Farmers Markets on Sundays. You can also keep up with her on instagram @restawhilecountry.