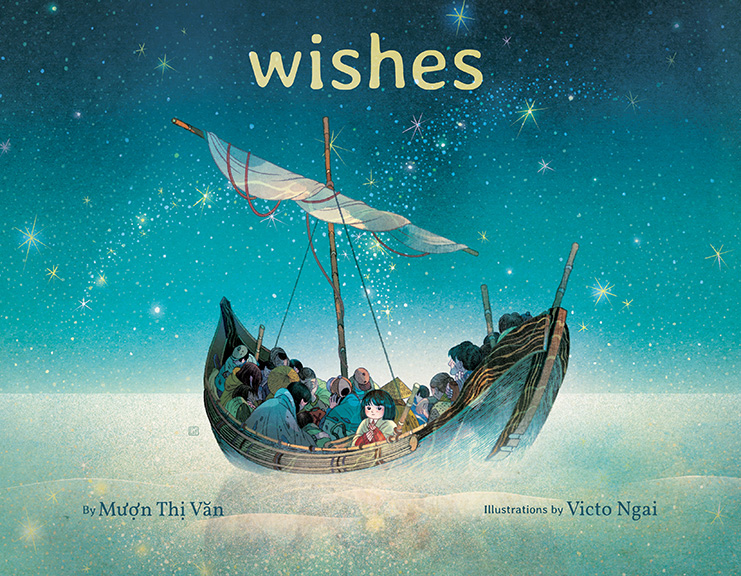 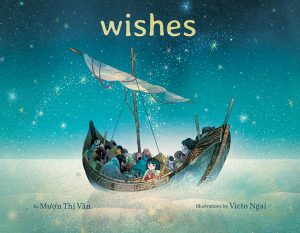 When I first received Mượn Thị Văn’s Wishes in the mail, I showed the thin illustrated children’s book to my mom. She opened up the book, sat down, and began to slowly flip the pages. I looked over her shoulder to read along with her.

Wishes tells the story of a small family leaving home. After saying goodbye to their loved ones, they board a small, crowded boat to leave their country. The journey is dangerous, as the sun and waves are unrelenting. They are able to flag the attention of a larger ship that takes them aboard, and the story ends as they look towards the horizon of a metropolitan city. This refugee story is one that is often told, but Wishes uses its simple but profound prose and stunning visuals to illustrate a more complex and nuanced portrait of the refugee family, in what they leave behind, what they long for, and the violent forces that disrupt their lives.

Victo Ngai’s illustrations are beautiful. At the beginning of the book, we peer into the household of the family preparing to leave. Though only a woman and three small children make the journey, multiple members of the household come together to help them prepare and say goodbye. From the women who gather around the table to carefully wrap xôi in lá chuối for sustenance to the offering of incense that the woman makes to her ancestor before leaving home with the children wrapped tightly around her, Wishes makes visible the generations of care and community that the family must leave behind on their journey.

Refugee families are multigenerational and transnational; this isn’t often part of the dominant American narrative of refugee families. Refugees are described as nameless and faceless groups in need, rather than people who have been forced to leave behind their communities and loved ones because of the wars that have been enacted by imperialism and war violence. By illustrating these relationships to make visible the separation of families during these journeys, Ngai shares a different way of understanding time and history within refugee families. That is, whereas refugees are often described as arriving with nothing, they come with histories, memories, and wishes of home.

Only 75 words long, the book’s sentences are strikingly unadorned. The parallelism of the book’s prose personifies the climate, objects and bodies that surround the family: “The night wished it was quieter,” “the clock wished it was slower,” “the heart wished it was stronger,” and so forth. The repetition of the wishing gets heavier as the journey gets increasingly difficult. Not only does the perilous weather beat down on the boat, but we see the young girl long for the grandfather and dog that they’ve left behind as she looks out at sea. There’s a contrast between the deep emotional longing for home and the physically dangerous climate that surrounds them, but rather than seeing these things as separate, Văn seems to urge us to consider how emotional and physical states are intertwined.

What are the circumstances that make wishing necessary? This question seems to be the undercurrent of the book, as the violence of war and empire create a world in which refugees must leave their home to seek asylum. In Văn’s coda, she writes, “More refugees are made every day, not only from local violence and persecution, but increasingly from catastrophic natural disasters and climate change effects.” The decisions of political leaders affect the individual people that must make the decision to leave or stay; and in the wake of these decisions, refugees wish because survival seems so out of their control. These larger forces that shape our lives, from imperialism to climate change, are seemingly out of our control because others hold the power to make those decisions. How might we listen to the most vulnerable people who must embark on dangerous journeys to urge us to fight for a safer world, in all the sense of what that means?

The book’s last sentence shifts to the first-person, as the narrator says, “And I wished… that I didn’t have to wish… anymore.” Though the book ends with the family descending the ship, looking out at the shores of the city, there is no clear resolution of what happens next. While we’ve reached the end of the book and their journey at sea, do they no longer have anything to wish for? The book illustrates the journey of a refugee family that has reached the shore, but it does not romanticize their future. If anything, the book refuses simple resolution, as it spends a large part of their story focusing on what they have left behind: a home, a family, a country, a dog, a grandfather.

The first thing my mom said when finishing the book was, “That was sad.”

The second thing she said is, “I didn’t get to say bye to my dad when we left.”

Văn shares at the end of the story that each one of the 22 passengers on her boat left behind a family member; Văn writes that she never saw her grandfather again. Likewise, after leaving Saigon, my mom never saw her dad again. He died of a stroke before she was able to return to Vietnam; the first time she went back home was for his funeral.

For my mom, the book reminded her of the father she left behind, and how she wasn’t able to say goodbye. And to be honest, I don’t think she necessarily enjoyed Wishes. She said it was sad, but not much more than that, and I didn’t push. For me, the book makes a quiet argument that wishing reveals our desire for something more, something better. And when I think of wishing, I think we wish for what feels out of our control. But perhaps, Wishes suggests that we can tell stories to make our wishes more than just wishes. In the book’s coda, Văn writes, “It is not always easy to decide whom to help and when.” But I disagree. I believe stories, like Văn’s and my mom’s, recall memories and histories that haven’t yet been shared, and I think listening to these stories makes that decision easy.